The JAF GRAND PRIX Fuji Sprint Cup was a heck of a busy three days, with SUPER GT and Formula Nippon sharing the same bill for the first time ever. And while that was all pretty spectacular, one of the weekend's support races really caught my eye, the Minor Touring Car Race, featuring raspy old gems from the seventies and early eighties, such as this immensely cool Nissan B310 above.

It wasn't just B310s though, as there was also a brace of B110s, the first iteration of Nissan's famous Sunny model.

And although the field was dominated by one or the other of those classic Nissan machines, there were a couple of interlopers too, one of which was this KP47 Toyota Starlet.

Here's one of the most famous B110s ever from the tintop era of the early seventies – looking as good as ever!

This is another example of the same model, being hurtled through the hairpin in the first of two races over the weekend.

Back to the B310 and this gorgeous MOTUL-liveried example.

Many, if not most of these cars, are actual original examples that raced back in the day.

The stance and overall aggressiveness of this B310 really made me smile.

Here's another B110 shooting out of 100R and towards the hairpin.

…and a B310 getting the inside line at that famous corner…

…and under braking going into that same corner.

Strange as the comparison may sound, doesn't the front grille on this B310 look remarkably like at Plymouth Duster from early seventies?

The block-style front spoilers were ubiquitous on these cars and were definitely making contact with the track on occasion.

A pair of B310s exiting the 'new' Dunlop complex. 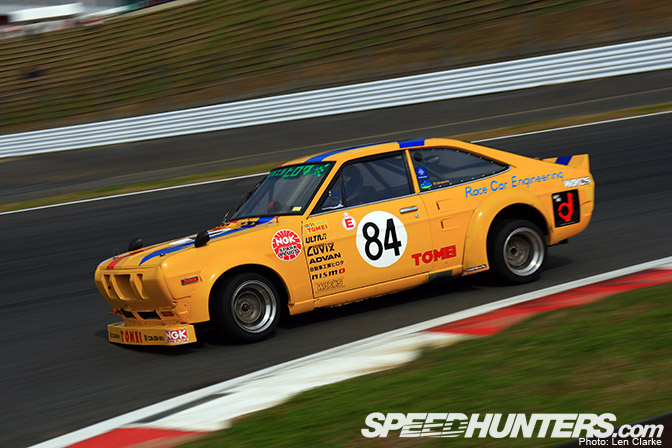 Here's another image of that famous #84 HIROTA TOMEI Sunny…

This is the other Starlet among the Nissan-dominated bunch, a KP61 in period Toyota livery – tres cool!

Just like its sister car the yellow #84 HIROTA TOMEI Sunny, the #24 ADVAN TOMEI Sunny is one of the most famous from its era – both B110s taking heaps of victories back in the day.

One thing that was a wee bit disappointing (though completely understandable) was the lack of paint-trading going on. The cars never really got that close to each other.

Here's that 310 from the Random Snap I posted last week – damn cool livery, and the modern NISMO sticker works too.

Before a parting shot of the cars with the grand old lady herself in the background.

It was great to see these machines being driven in anger on track, their raspy exhaust notes a reminder of what racing cars used to sound like way back when. The whole weekend, bringing the country's top (modern) series together for the first time, coupled with some very interesting support events made it a thoroughly enjoyable (and brutally busy) three days, something I really hope is repeated every season. I'm sure the 65,500 fans will agree.

Love that green #47 B110. Nice to see these classic Japanese machines in action.

THIS IS AWESOME!!!!!!!!! great photos! do you have any detail shots of any of the cars? interiors? engines? chassis? anything would be great, maybe some car spotlights? especially the Toyota Starlet...

i will pay for wallpapers of every shot you have... this made my month.

This is awesome! I really never see these cars in action glad to see you guys captured the glory. Thanks for sharing

How about an Old School/Nostalgic Week/Month?

F***ing awesome. This is why I come here.

How did 13" wheels ever get tired? Best post in a very long time. Good photo's Len.

Loving the KP61. I didnt know that the B chassis were that popular.

hey some vidz from this cup?

I LOVE old cars, especially small japanese coupes like these. They are so fun, even to stare at!

Why can't auto makers stop making big, fat and heavy cars with boring drivetrains such as FF with automatic transmissions and whatnot? They should look into the past and make machines like these again.

great shots remind my of my old b310 coupe just not that tough thanks for posting!!!!

One small thing... B10 Sunny predates the B110s, making those in fact the second 'iteration' of the Sunny name.

I love the KP47 so much, wish I could even see one in the flesh

Great shots Len, absolutely gorgeus examples of oldschool racing, but where´s the yamato civic? that civic used to race against all of this b310 and 110´s and even sometimes won!

BTW: are you coming to south america with the Fia GT1?

Anywhere to learn about the history of the original championship.

Those ole school cars are PIMP. They almost look like the Autobots. TRANSFORM and ROLL OUT!!

Would love a desktop of that KP61.

Is there anyone that can help me with info on getting the B110 flares on these cars? This matches pretty good with what I'm wanting to do with the B11 Sentra. Modding may have to take place but they may fit the bill well.