The main feature of the JAF Grand Prix Fuji Sprint Cup was the pair of races for both the GT500 and GT300 classes of SUPER GT. Launching from standing starts (as opposed to the regular rolling getaways), there was a whole new dynamic to what were single-driver sprints. Each driver would pilot the car for one 22-lap race, with no refuelling or driver switches allowed. For the first of the GT500 races (above), Richard Lyons took a commanding pole position, and never once relinquished the lead on his way to a lights-to-flag victory.

It was a hugely exciting race, with a number of drivers making massive inroads on their starting positions. Above, Kodai Tsukakoshi in the #17 Honda HSV-010GT leapt from 9th on the grid to a 2nd-place finish – though that result was in doubt until well into the evening as scrutineers weren't happy with his, or any of the HSVs. Eventually cool heads prevailed and Honda were back in the morning to fight  another day.

Here Benoit Treluyer takes a decidedly different line into turn 1, and it paid off as he jumped from 12th at the start to a strong 5th at the flag.

The #1 SC430 of Andre Lotterer (seen here in Friday's qualifying session) and the identical #6 machine of Bjorn Wirdheim made contact at Dunlop Corner on the opening lap, both cars falling well down the order as a result.

Total stability in terms of positions saw the #12 CALSONIC IMPUL GT-R of Ronnie Quintarelli start and finish the 100-km sprint in 3rd place.

Meanwhile back at the front, Lyons controlled the pace and made sure no rivals came too close. 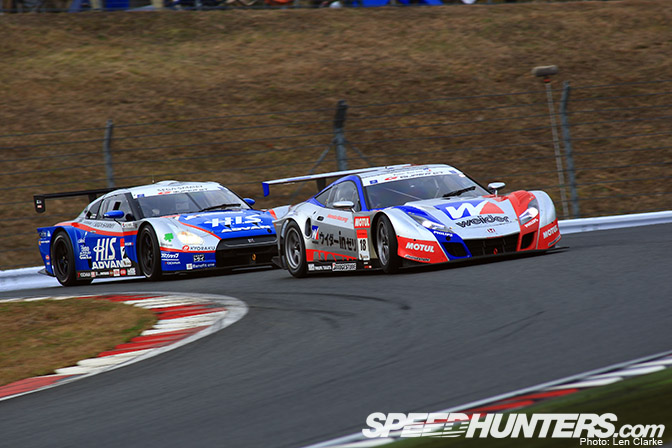 Further back, Loic Duval had had a disastrous start, falling well back at one point from 4th on the grid. He made a dogged recovery however, eventually finishing 7th.

By far the most impressive dash at the start came from Andre Couto in the #39 DENSO SARD SC430, vaulting his red and white LEXUS from 11th to 4th by the end of the opening lap. Tyre issues saw him fall back in the second half of the race, though he was able to cling on to tenth at the flag.

Back at the front, Lyons was never headed despite Hiroaki Ishiura running this close at one point. It was a well-deserved victory for Richard and the Cerumo squad, showing that they've got the pace despite a disappointing season.

In the first of the two GT300 races, the ARTA Garaiya of Shinichi Takagi got off to a brilliant start, though it wouldn't last and the bright orange machine was soon being swallowed up by its rivals.

One machine to get ahead at the standing start was the #66 Aston Martin Vantage GT2 of Hiroki Yoshimoto, vaulting from 5th to third place before the first corner. Further advances saw the machine take over the lead at the halfway point of the race…but that wasn't the end of the story.

The #74 Corolla AXIO of Yuji Kunimoto maintained its 2nd place grid spot right to the end, though was awarded the 2nd step on the podium only after Yoshimoto was handed a 30-second penalty for unsportsmanlike conduct in his attempts to hold onto the lead in the dying stages of the race.

The man he was trying to keep behind was Katsuyuki Hiranaka in the JIM Gainer Ferrari F430 GT who was on a blindingly quick charge and went on to take a convincing win.

Another car – and driver of note was Hideto Yasuoka in the newly-liveried and newly-named #9 machine, the 911 GT3 Porsche Japan entry from COX SPEED. The rookie started in a remarkable 4th place and held his own early on, though a blown engine on the main straight just a few laps to go was a bitter end to an otherwise impressive afternoon.

Celebrating its last weekend of racing, the fan-favourite RE Amemiya RX-7 started 10th at the hands of Ryo Orime, moving up half a dozen spots to end in 4th. A lot of people will be rooting for the team with their new machine (as yet unannounced) in 2011.

Serious kudos goes to the #33 HANKOOK PORSCHE of Tomonobu Fujii who, after a 15th place start – and this moment on the opening lap, made it onto the last step of the podium in 3rd. Partially due to an inspired tyre choice, he drove the wheels of the car and received just desserts as a result. Nice one.

A new livery for the #31 Corolla AXIO of Kosuke Matsuura didn't improve the team's fortunes, the former IRL driver moving up only a pair of positions from his 14th-place starting position.

Car owner Kazuoh Takahashi was back behind the wheel of the #2 Mooncraft Shiden for the first time since August's Suzuka 700kms, seen here fending off Keita Sawa in the #365 ThunderAsia Mosler MT900M during the early stages of the race.

The all-new single-driver, no-refuelling or weight handi-style sprint adopted for the JAF GRAND PRIX Fuji Sprint Cup really separated the men from the boys, clearly showing the fans exactly who among the many pairings is fastest. It's an interesting adaptation for SUPER GT, and one I'm sure a lot of the race-going public would love to see more of.

Stay tuned for coverage of the 2nd GT500 and GT300 races from the Fuji Sprint Cup.

I have received news the MODELER"S (a plastic and resin model car manufacturer) will be making a plastic 1/24 scale model kit of the GT300 Corolla AXIO, I'm not sure which version will be made, however.

awesome coverage, by the way. I love this stuff!!

Super GT vs. DTM PLEASE FOR THE LOVE OF GOD!!!!

Thanks for the coverage Len, would love to see a desktop of the RE RX7!

Thanks for posting some real racing and not drifting from new zealand or funky hella flush vans. We need more of this

Is there anywhere to watch this online. Stream, Torrent... anything? Need to watch racing.