I just can't believe it's been nearly two years since my last AE86 trackday at Mondello Park. It really just felt like the start of the summer when I last covered this event, but in reality it was February 2009. I've no idea where the time has gone (besides into the past obviously) but it was with great excitement that I grabbed my camera and headed out the door on Saturday morning just gone.

Having endured an absolute horrid week of typical Irish weather (rain and lots of it) the sun somehow came out to shine for just enough time on Saturday afternoon.

The event was independently organised by a member of the Irish AE86 owners club and attracted a field of hachis in many different shapes and sizes.

The sessions of the day were split into grip and drift only sessions. It's probably a good thing as some of the drift session guys would probably never come in to the pits otherwise.

Managing to manji the Mondello start / finish straight is something usually reserved for those with four hundred plus horsepower. Surely a testament to one of the greatest engine / chassis combinations of the last thirty years, that this wasn't the only '86 to link the straight.

Adrian Walsh has resurrected his '86 coupe from the dead. The first time I seen this car was on Alexi Smith's Noriyaro blog some years back, when it was being used as a track car by one of the Shino Kouba guys. It's great to still see the car attacking the tarmac on the other side of the world.

You may remember this car from the last '86 trackday story, it's still going strong but has been given an extra lease of life with a 20V conversion.

Another of the main straight manji-ers, this time with cheating SR20 powers

The paddock was filled with examples of both UK spec …

… and JDM spec cars. I love listening to the banter between both camps debating the merits of each spec of car.

This brown example looks and sounds absolutely amazing. I see it every now and then near home and it always put's a smile on my face.

This supercharged and Equip'd '86 has only recently survived a rather solid impact whilst, um, street, eh, parking ?

Having straightened the car, he wanted to give it one last run on track before stripping and rebuilding it over the winter. Check out the artwork on the wings, completed by Neil Shen of the rather awesome JuiceBox blog and completed with a couple of Sharpie markers.

I'm looking forward to seeing what's next for one of Irelands most infamous hachiroku's.

The track sessions were open to non-86s also. I do believe that is Formula D's own Mr. Dean 'Karnage' Kearney in the passenger seat.

Whilst we're on the subject of non-86s, this E36 M3 was absolutely balls out all day long.

This 740 Volvo looked effective but comical on track.

Ir's rare to see a decent looking EG Civic in Ireland and this was a USDM inspired example.

Back to the Hachis … 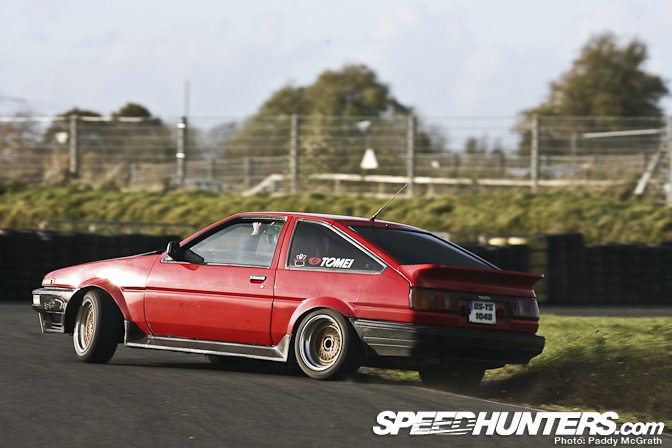 Using all of the track and the some …

With days getting shorter, the low light made for some dramatic, if not very difficult to capture, images.

Along with the Autumn colours starting to creep in, it was a dream situation to shoot in.

The Tekno Twinky road AE86 was probably one of my favourites on the day.

Along with this KE70 Corolla which I'll be looking at in an upcoming Car Spotlight.

This NA Trueno (also pictured above) gets my 'Hero of the Day' award. For reference, that's the chequered flag station he's attempting to rub at the end of the straight.

This coupe was running strong all day.

With the day ending and the sun setting, it was one last chance to take the surroundings in.

I don't usually get excited about specific make trackdays but there is something about the '86 days that just grabs my attention everytime.

This was actually meant to be a rare day off for this Speedhunter, but I'm glad I didn't miss out on this event.

I'm sick I missed this,

Twinkys Levin and Adrian's yellow 2dr do it for me!!

GREAT work Paddy, always glad to have you at the AE86 days

was good to catch up!

thanks you so much for covering this paddy.

class pictures and write up paddy ,thats me in the 16v trueno on the straight,i copped the flash under bridge and had tell myself not to fuk up cos i knew it was probably you!

Cant wait for a spotlite on thhat Ke70 corolla!

wicked post!!! man this makes me really want to sell my current car [or maybe not] and get myself a piece of motoring legendry.. there is even some feature-worthy ones flying around that track! i think the 'brown example' you clock now and again looks cool! great post and photo's - even the track looks just right!

I cannor wait to get started on my AE71 project....killing me not having a shed to work in!

Is that Kyle's KE70? Class car! Nice coverage and no rain too!

Excellent coverage as always, great stuff. Wish I had gone.....

Luck of the Irish, cool event!

out here in socal thats not a rare sight, but seeing it in another country really makes it seem unique.

love the pic of my grey trueno,shame you didnt get a pic of the front tho,

p.s thanks paddy for the speedhunters stickers (",)

as you had mentioned, manji drifting with the 86' is only possible because of is motor and chassis setup. i think this is mostly why we find the car so amazing. all year around this car is amazing!! id like to see more on the rebuilt noriyaro track car, its very very interesting lol

UK spec hachi? I thought they didn't sell them over here.

And that custom sharpie wing is awesome.