Sorry guys you haven't heard anything from me about SEMA. I'm in high production on a video game project and haven't had any time to write an article until now. So if you don't mind, my SEMA coverage will be trickling over the course of the next week or so.

I thought I'd start out with a quick look at a Mercury lead sled that was sitting pretty as part of the line of cars displayed in front of the Las Vegas Convention Center.

Regular Speedhunters readers will know that I have a real soft spot for lead sleds. My love of these cars goes back well before I had any real interest in Japanese cars of any sort.

So I was always going to stop in my tracks to appreciate this Custom Mercury.

Outwardly it's a nice execution of a clean, traditional style. The headlights have been frenched, with much de-chroming to clean up the lines of the car. It's all good.

However, take a walk around the car and you'll quickly see that something is amiss here.

This is a "new" trend of recent years in the custom scene. Perhaps there are no more unmolested Mercury coupes left to hack up, or it may be the escalating costs for prime old metal, but an increasing number of four door sedans are appearing as full-on custom builds these days.

I have to say that I'm not that enamored with the interior. I don't like seeing the modern stereo setup on display there…

Same goes for the sporty steering wheel… feels out of place for my taste.

But then again who am I to say? I'm just a fan boy with a camera…. Notice the peaked hood; that's the ridge added to the center of the hood/bonnet for those of you not familiar with custom culture lingo.

Let's look under the hood/bonnet.

It's looking pretty clean in here and the car has obviously been built for reliable driving. The stainless steel lines though would likely get the car ruled out of a feature in a magazine like Hot Rod Deluxe as they like their period specific looks. What do you think?

I think the owners have done a great job with the roof chop. You don't notice a lack of smoothness and elegance in spite of the extra doors.

It's funny how automotive trends change over time. What was once undesirable, becomes the thing to have…. this is the essence of our Haulers and Sedans theme for November. The time for four doors is now!

The question for me though is, what's next? Minitrucks perhaps? 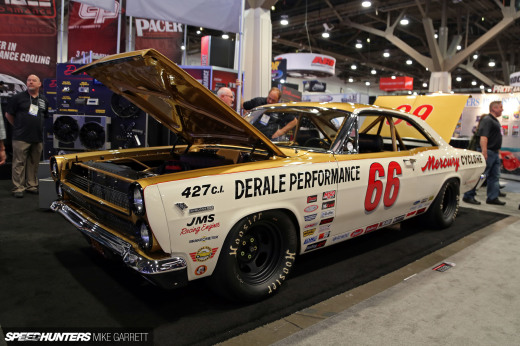 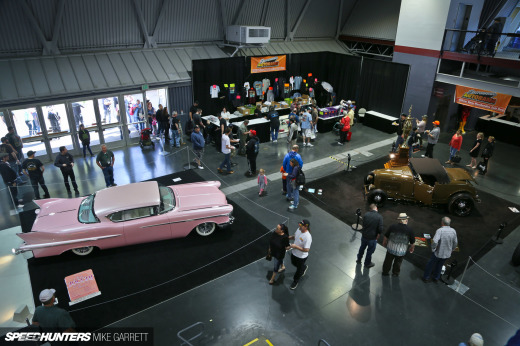 wonderful car.. the colour is perfect - the roof chop is a work of art, not easy to do at best. those suicide doors look like they were meant to be. i can't fault it! even the wheels are sweet. if i had enough hair i'd slick it back and pose off like a good 'un drivng this if i owned it (in my dreams) - err where's the pic of the young lady who was posing next to it then!!(?) - i like that you shared the photo's duties?? - great write up on a cool car!

and don't worry, we could never forsake our Rodfather, it'll be nice to have all the SEMA content paced out a little more, makes it easier to digest

weres the fox that was with the car?!!!

Awesome car! I am a definite fan of "when old meets new", it's just finding that balance between the two, or how well the "new" goes with the "old"..

FYI saloons/sedans have ALWAYS been cooler than coupés

What a superb build and amazing creation, I love it! I agree the steerign wheel, headunit and speakers look out of place but otherwise its spectacular. I prefer the motor and setup he has in that engine bay, thats a good thing in my eyes. Such a unique ride, nicely done and those doors just take it over the top, great feature, would love a desktop size pic!

When someone uses the term "Merc" this is what I think of.

what a amazing car. Great colour. Where is the girl from the other post?

You dont really tell us much about the vehicle though?

Since it's the theme for 4 doors, you guys should look look into the Toyota AE92! Great, underrated car.