Spotted at the recent AE86 Trackday at Mondello, it was the first time I've seen this car in a couple of years. The last time I seen it in action was at a round of D-rift back in 2008, when it was being driven by Martin Ffrench on loan from it's current owner Adrian Walsh.

We're so use to seeing drift specific '86s it's quite cool to see a track focused car that was built to run fast laps.

The yellow paintwork on the car is really striking, it just really popped in the low-Irish sunlight last weekend.

Spotting it parked up in the pitlane, I managed to grab some quick shots of it as it cooled down after a session.

The car is currently running a full Mercury R bodykit with the front wings having been cut, rolled and extended to take the 15×9 Watanabe wheels. The fronts are wrapped in 195/50/15 Hankook RS2's. 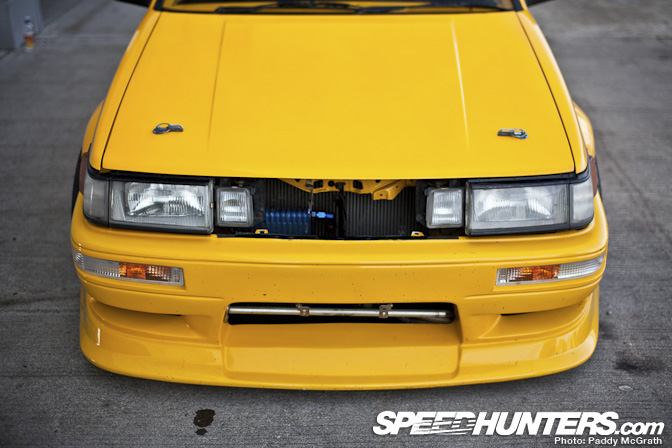 This was the only shot I remembered to take of the front of the car, showcasing the FRP bonnet, C EX Racing alloy radiator and Trust Oil cooler.

Thanks to the wonders of modern technology, I've managed to appropriate this image from Adrian's Facebook page. Here you can better see the fully rebuilt 20V 4AGE with adonised blue stacks. On the other side you'd find an Apex'i four branch manifold with a custom side exit exhaust. At the back of the engine you'll find it mated to a T50 gearbox with a TRD quickshift. Between the engine and gearbox there's a TRD lightened flywheel and a TRD clutch kit.

Inside is a pretty simple setup with two Sparco seats, Sabelt harnesses, an OMP deep dish wheel, a flocked dash which houses a set of G-Reddy gauges which include oil pressure, water temperature and a tachometer. There's also a dry cell battery located behind the passenger seat along with a fire extinguisher.

dam I want a Hatchi

Is that a bolt in cage?

I love the fender pulls like that, in the front.

Shino will be happy to see this

Top work and what an awsome car!

Great car! i love the foglights-with-no-grille look on levins, there's just something about it.

I'm wondering though, what's the connection with Shino Kouba? I'm usually very interested in the things she's doing so I was a little disappointed to see that bit being mentioned only in the title.

Absolutely one of my fav Hachi's on these land's, would love to own it,

is that how fenders have alwys been done?? i didnt know that i could just cut the fender to get my stance!! omg so doin it.

@ blue slug, the car was built at Shinos a few years back, and as since made its way to Ireland, still being used as a grip car!

i would love to know if thats a custom cage or a bolt on! any other pics of the interior Paddy?

very good article.. love the car, but not really feeling the rear spoiler.. although i know it has a functionality.

It's a bolt in. You can see the bolts in the pics, and looks pretty cookie cutter.

Cool looking hachi... but odd choice of tires for an actual track car.

Does anybody notice the EF9 bumper lights?