The first car I saw after I exited the press center at the My Car Show was this 911. I quickly set up my camera and started shooting. Two men approached me whilst I was shooting and recognized the Speedhunters stickers I had on my tripod. It became clear to me that both the men were working for 9ff, the builder of this car. After a quick introduction they showed me the car and explained a bit about it.

This car is the latest incarnation built by 9ff for a new customer. It is not the ‘regular' GT9 as some of the commenters thought but is actually a GT9-R that is even faster and has more horsepower. It will be limited to 20 cars and each one of them will be built to the exact specifications of the owner.

It all starts with a 997 911 GT3 that is completely taken apart and rebuilt with the best parts available. You can choose the exterior depending on what you want to do with the car. 9ff can built your car for Topspeed performance or track performance but both options will be street legal.

At first I thought this was the original blue version that they had repainted but the people from 9ff explained to me that wasn't the case as the blue version had been completely written off after it crashed at Bruntingthorpe, UK. It crashed during a high speed braking test after the brakes failed. 9ff is still in court against the producer of the brakes.

At high speed the exhaust can get very hot so they heatwrapped it and even made a cutout in the bodywork. I really like the fact you could see some of the technology through these cutouts.

These ultra-lightweight OZ Superleggera wheels are a perfect combination for this application. They come in 20"x8.5 at the front and 20"x12 at the rear. Behind them are the Porsche Ceramic Composite Brakes (PCCB) with custom gold calipers and GT9-R logos.

The rear of the car reveals parts of the suspension and the differential. It also shows how much wider the car has become compared to the stock 911.

The body has been completely made from carbon and Kevlar. You can still see some carbon exposed in the bodywork like these gills on the front wings.

The roof has also been left exposed. The large macrolon rear window gives you a glimpse of the engine bay and the rollcage.

The last and final stage is for ultimate top speed runs. It has 1120BHP and a top speed of 414km/h and reaches 300km/h in 15.8 seconds. This black and gold version has the final stage and according to 9ff they can even deliver this car with 1200bhp. 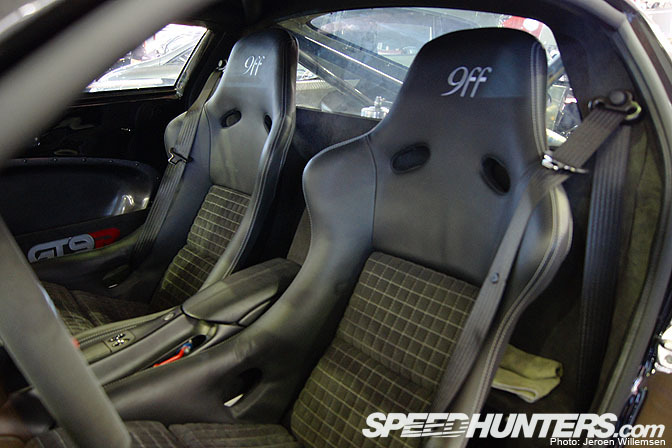 The interior can be custom made to the specific demands of the potential buyer. Sometimes you see the most horrendous color combinations but not in this car. It was all black with some nice stitching on the seats.

There is no doubt you are driving a GT9-R. You can choose three different gearboxes. A six speed manual or sequential and a five speed tiptronic that is available for the 750BHP version.

When opening the doors you immediate feel how light these doors actually are. They are completely made from carbon and there is still space for your roadmap.

Within two weeks I'll be traveling to the Essen Motorshow and I will also be going to Dortmund for a visit to the 9ff workshop. They are building something special and I hope to give you a world premiere right here on Speedhunters.

Recognising Greatness With The CSF 911

Yes, dont know what else to say lol

Porsche has done a great job on this, This is what I call a super car. Just wish i could track one

Wow, that is intense and incredibly quick! Taking the 911 to the extreme. I'd love to see this in action

Incredible! I wonder why they never built anything all out to challenge the Veyron's top speed. A twin turbo, 2 stage Nitrous oxide 5.0L flat 6 might very well challenge quite abit of downforce

The "car" is on another level:)

I don't doubt that there are other steering wheels as an option, but i really hope there are, because this is so not acceptable in my eyes.

I like this interior more than the ol' Blue one.

I was sad when I learnt from EVO that the Blue car had crashed, I believed it wasn't at a very high speed and so thought it was going to be repaired.

The steeringwheel looks like one from VW Lupo 3L ... was made from a magnesium alloy

Great write up and wonderful photos, I love the way they've given it a rear end like the classic Porsche race cars of yesteryear. The one thing I find slightly odd is the steering which looks sort of tacky compared to the rest of the car. Looking forward to some more 9ff coverage. Also for anyone who hasn't seen (or heard) the "regular" gt9 here's a link to an Autocar test with Chris Harris

Can't wait for the shop tour

The wheels are ultraleggera's not superleggera's

wow that steering wheel is ugly... :0

Well this is some piece of engineering. The price tag must be as astonishing as the car itself.

And about the Veilside R32 Drag comparison (which is 0-300 and not 0-320), the car was specifically build for it and you can see on Youtube that the Veilside gearbox is extremely "short" to get the best of the car on 0-300. And remember that the R32 is AWD. Try to do a rocket launch with a 1200HP RWD without smoking the tires

But that rear brake light arrangement reminds me of a kit that is on 2 RX7 FDs in Japan. Is it off the same manufacturer?

one of them will end up in my garage.

Love the car, hate the position of the button on the steering wheel!

What was the manufacturer of the failing brakes by the way?

Just WOW. Love that color also. Work much better than a blue.

It looks like they've moved the engine to a mid mounted position infront of the transaxle like a porsche GT1 rather than the 'traditional' 911 rear engine setup, yet this wasn't mentioned in the article at all, wtf?

H05TYL- that's because it is. It's similar in its design to the RuF CTR3 in that it basically uses bits of 911 GT3 and Cayman chassis floor with a custom body and the engine moved forwards.

isnt that actually a boxter dashbord? ....

,but seeing that dashboard makes me think it would be a boxter....

and honestly .. it would make more sense since both are Mid-engine sports-cars .... + the fact the 911 and the boxter have the same body/frame platform from the nose to the seats....

9ff unveiled this new version of the GT9 at the recent Essen Motor Show. It was specifically built for