In an area known for its increasing number of car-related events, the fifth running of the now hugely popular Motorsport Japan took place in Tokyo's Odaiba district. Superb weather greeted the throngs of fans on both days, all eager to catch the demo runs, static displays, driver talk shows, autograph sessions and general excitement of this end-of-summer bash. All of Japan's major motor manufacturers were present, with machines from their respective pasts and present displayed up close and personal.

One of the most iconic liveries in Japanese motorsport is the colouring on the 1991 Le Mans 24 Hours-winning Mazda 787B.

These Civic one-make racers, while stationary here on Saturday afternoon, were out on Sunday giving 'taxi rides' to a few lucky winners.

In the Honda tent, the maker showed off a variety of machinery besides racing cars. Above, a solar vehicle as raced in this year's Suzuka Dream Cup.

Nostalgia plays a big part in events like this, and cars from various makes' histories are especially popular. This is the rear quarter of one of the pair of Nissan Skyline GT-Rs (R33) that contested the GT1 class in the 1996 running of the Le Mans 24 Hours.

As always, 'Taxi Rides' were a very popular part of each day's activities; where professional drivers from a range of disciplines ferried punters around the rough and uneven parking lot surface. Tyres were getting chewed right up!

Here's Japanese rally hero Fumio Nutahara in his Group N Fiesta, the car he campaigned on the recently-run Rally Japan.

…and while Nutahara-san looks composed and serene, his passenger's holding on for dear life!

The demo runs weren't just restricted to cars, as this kart demonstrates – though there's something a little odd about it…

Oh right – it must be the second seat. This guy was getting thrown around like a rag doll, it was hilarious to watch. He seems to be having a blast – and isn't that the point!

The Monster Sport stand was impressive – as was the great man's driving despite the confines of the venue.

It's obvious where he got the name Monster; Tajima-san's a giant of a man!

The manufacturer tents were, of course, full of action. Current SUPER GT challenger of Motoyama and Treluyer drew a lot of attention.

As did the pair of LF-As in the Toyota /Lexus tent. They look somewhat familiar…

Nissan's latest customer-spec machine, the GT-R RC which made its Super Taikyu debut in June. This is the car as raced recently in Okayama with the crack Daishin team.

Here's a peek inside the cabin. While retaining some obvious traits of the road-going R35, just a glance and you know it's all business.

Another regular at the event is the JRPA (Japan Racing Photographers' Association) booth, where members take images of visitors to the show alongside their favourite drivers. The montage above details some of the international work JRPA members have shot this season…

…while this panel features members' work from the domestic scene. Unbelievable. Look closely; each one is a work of visual art.

There was also a display for the new Ayrton Senna movie, (featured here in a previous post) which included an example of his legendary McLaren MP4/4. People were pulling paraphernalia off the tables like there was no tomorrow!

Speaking of legendary, the 2011 Subaru Impreza WRX-STI always had a crowd of onlookers lurking around. With the doors unlocked, event-goers were constantly climbing in and out of the beauty over the course of the two days. Clearly, sedan-shaped Impreza variants still stir the hearts of die-hard rally fans.

The maker of course hasn't turned its back on international-level rallying while its assault on the gruelling Nurburgring 24 Hours has seen steadily-improving results in the four attempts made thus far.

The front of the car is indeed convincing; its carbon fibre and meshed-out air intake leaving no doubt as to the challenge that is the 24 hours of the Nurburgring.

Back at Nissan, GT300 favourite Kazuki Hoshino takes on the challenge of hanging wheels while running against the clock. The fans loved it!

This one's going back a few years: a close-up of Erik Comas' title-winning R33 GT-R from the 1998 JGTC season. Click here for a video (in Japanese) overview of the first half of that season.

Though many of the cars on display were from the domestic Japanese motorsport scene, there were a number of important international winners too, such as this Silvia 200SX that took on the Safari Rally in 1988.

On Saturday, there was a large display of rally and GT replicars, which I'll have a separate post on in the next day or two. These are fully road-legal cars (obviously in the case of rally machines) with perfectly executed decals and liveries – everything right down to the event-correct scrutineering stickers!

The same area on Sunday featured a different bunch of enthusiasts, and it is this exceptional example of a 1970 Mazda Cosmos that really caught my eye. One of the best Japanese car designs ever in my opinion. What do you think? I find it difficult to believe this wouldn't have been hugely popular on the west coast of North America back in the day. 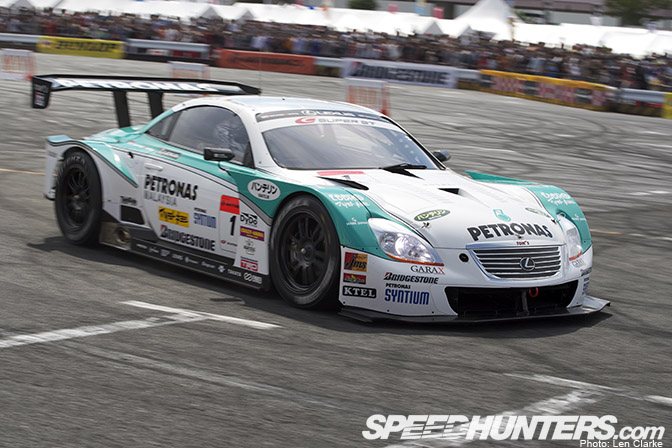 The crowds really swelled for the SUPER GT demo runs, a doughnut-fest by three of the series' leading machines and their drivers. Here's PETRONAS TEAM TOM'S driver Juichi Wakisaka getting ready to light 'em up.

And I leave you with multiple champion Satoshi Motoyama, in the car that produced by far the best smoke shows among the three GT machines. If you're interested in Japanese motorsport and want to get 'up close and personal' with the stars and cars, this is an event you simply cannot miss! And it's free! Roll on 2011.

Why oh why can't I live in japan!

That's two mega events I missed in succession. Drinking with Lewis Hamilton and this...

Too wide GTR!!! It makes me smile broadly

Please can you make a desktop of the First Pic.

Awsome great coverage! The rally cars the FD2'S the GT Racers... EVERYTHING! Brilliant post keep it up. I hope to see more!

liking those Celica reps.. plus the honda Solar vehicle.. cool - no use to us in "Blighty" tho' such a pity! Oh yes and the Mazda Cosmos is such an elegant looking ride..

those fd2's just look so beastly! i can't wait for the day i crank my fd up to that level.

Two photos of a wall of photographs.

One photo of the 200 classic cars from Sunday.

Go figure. How about writing an article about a stack of articles?

How did you accidentally get a 117 Coupe into the background of the Cosmo picture? The 117 is rarer and probably more valuable, way to aim the camera at the more notable subject. And none of the Bele-Gs?

That's a R2 fiesta rally car. It's much more than a standard car with a roll cage(Gr. N)

So with the time change and crossing the international date line, you loose eight days when filing a story via the internet.

Are there any pics of the micra/march in the first pic?

JRPA must be a dream. Anyways, those Civics in the 4th pic are making me drool.