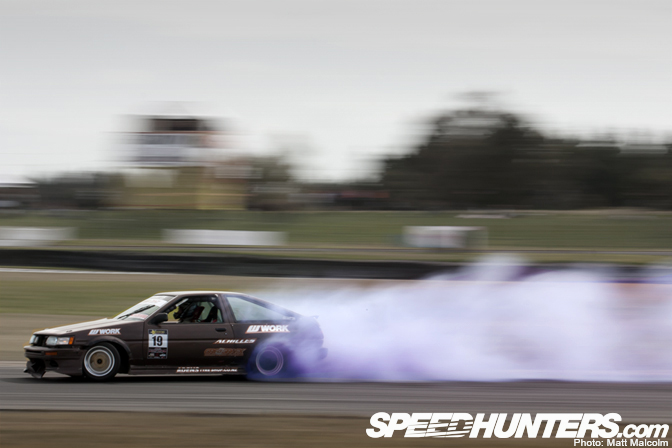 The 2010 Rockstar Energy Drink D1NZ Championship has kicked off with the first round held at Ruapuna International Raceway. As this is New Zealand's premier drift series, Speedhunters was there from the first practice session.

The course was quite technical and a number of South Island drivers looked to have the track dialed in. All were quick to navigate the judged section with accuracy and speed.

Bruce Tannock's S13 was sporting a new livery. It was looking and sounding great through the center sections of the track.

Here's Andrew Redward's used and abused S14 Silvia. I am eagerly looking forward to his new Mazda FC3S RX-7, which he will be competing with soon.

Carl Ruiterman looked solid all through practice. The grip his S14 Silvia has is amazing and subsequently the speeds he reaches are almost supersonic!

While walking through the grid I stopped by Mike's MADBUL RX-7 to ask him what it was like being back in the old girl. His response is pretty much summed up in the shot above. Choice bro!

No stranger to competition, Mike's veteran RX-7 was devastating throughout practice.

Back to the grid and Sky Zhao steals a quiet moment to talk with his pit crew.

I just love Robert Tomlin's clean looking S14 Silvia. There is something about the raw simplicity that just appeals to me. What do you think?

Another hometown hero, Simon Uquart, drove his Toyota AE86 incredibly well during practice and was one of my picks to make the top 16.

Two Australian drifters made the trip across to New Zealand to compete in the Rockstar Energy D1NZ series. Josh Coote in his 180SX (pictured above) drove well on the unfamiliar track. Unfortunately fellow Australian Jake Jones suffered mechanical problems and struggled to get any track time during practice.

That's it for practice. Stay tuned for more coverage of the first D1NZ round!

Wow Awesome Coverage here! You guys are doing a awesome job, Thanks for sharing!

it's a sad, sad day when MADBUL can be called ugly

Was such a cool event! Heaps of upsets!

So cool... my hometown track growing up. Wish I'd been there...

And there it is another shot of ur main man Hugo!! u dont let me dwn do ya!! nother boost to his EGO if thats even possible.

Yes you should come home Ian and bring some Falken cars and drivers!!!

@D1RGE.EXE im calling it ugly. compared to what it used to be, it is definitely uglier. the digi camo black with red bull graphics, combined with the BN sports kit made it beautiful. but now its just bad. the blotches of white clash with the redbull graphics and it just looks messy.

i hope the madbul ends up with a ducktail also, still dope

Rad shots! Matt has a pretty steady hand or that image stabilizer does the trick! I'm guessing these were shot around 1/20 sec? These shots are something I strive towards accomplishing.

The marble car was a S14 , The tire rack that he bolted to the rear sub frame was sweet as well . (did you get any pic s of that matt) . This guy was truly dedicated . And drove the car hard allday friday , made top 16 in rookies and was unlucky not to make top 8 ,Party'd hard on saturday and then drove the car home on sunday .

the team NFS livery works on the RX8....sadly, not so much on the rx7. looks wack now and that saddens me greatly.

the paint-work on Simon Bourke's car lookm cool, marble-style you say?? i like it. Simon Uquart looks to be "cutting things" up real hard in his AE86 too!! we need a feature on "Curt Whittboy's" R34 it looks ready to thrown down!

I agree with extreme, not that it's ugly now... It just looked so right before.