When it comes to cars that divide opinions, I think you'll be hard pressed to top this. Say hello to Queen St's latest creation: a BMW M3 powered by a Mazda four rotor engine. A wicked creation that is half drag car and half show car. And yes, you're eyes aren't deceiving you; that really is a gold-plated motor.

Rod, Casey and I have been discussing this car since it debuted a few months ago, and we agreed it was a fitting inclusion for our Drag-themed month. I mean, it's not every day that you come across a 1600hp BMW M3 built on a chromoly full tube chassis, let alone one featuring nickel and 23 carat gold-plating.

Based in Australia, Queen St are best known for building custom show cars, but their love of drag racing led them to create cars that could do both. This is actually the third BMW drag/show car that they have built. In 2003 they campaigned an E36 before replacing it a few years later with an E46. When the E46 was damaged in New Zealand, it was stripped down and rebuilt into what you see here. While its predecessors both featured bright candy paint, Queen St kept this one ominous, painting it in a House of Kolor black with gold pearl.

Swallowing up most of the cabin are the carbon rear tubs and the Lenco transmission, which is a five-speed to keep the four rotor in its tight powerband.

Everywhere you look there's an impressive level of detail, with the parachute brackets and wheelie bars also receiving the gold-plated treatment. As did the rivets and 16×16-inch Weld double bead lock rims.

A throne fit for a king… or should I say queen?

It's hard to imagine that a car like this will ever turn a wheel in anger. Indeed, Queen St received plenty of criticism with their previous BMW drag cars. When owner Moey debuted their first E36 drag car, critics dismissed it as never being able to crank, let alone run down the quarter mile. However, the naysayers were proved well and truly wrong with the E36 setting a personal best of 7.1 @ 197mph. The old version of this E46 holds a PB of 7.2 @ 196mph.

Having learnt a lot from the first two BMW builds, Queen St are confident this will be their fastest yet. And in spite of all that gold, the BMW is actually 200kg (440lb) lighter than the previous version. Before being gold-plated, the quad rotor was assembled and run on an engine dyno, producing a power figure of 1664hp. While quad rotors were developed by Mazda quite some time ago (the first prototype was in the '60s and in the '80s Mazda used them in the legendary 767 race cars), this is a custom bridgeport using a billet eccentric shaft and lightened Series IV rotors.

Force feeding the four-rotor is this enormous GT60 turbo. A turbo of this magnitude needs a pretty serious fuel system, so it's hardly surprising to discover 20 1600cc injectors.

Check out the rear housing which is best described as monstrous. The turbo setup also utilizes an equally large 75mm wastegate and 5-inch dump pipe.

A MoTeC M800 ECU and ignition system are used; the latter is mounted behind the pedal box.

The frames for the Lexan windows have also been gold-plated.

Plenty of carbon fiber has been used for the one piece front-end, doors, rear wheel tubs, interior panels and wing. Here you can see the exposed carbon in the pin-striped flame graphics.

More visible carbon, this time on the rear wing. 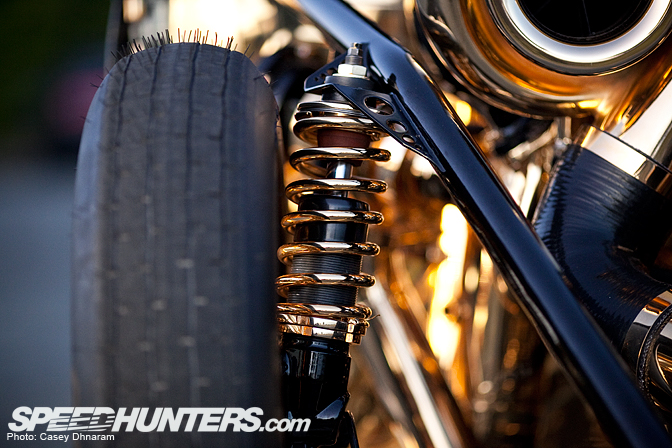 Coilovers are from Strange, with the 300lb springs given the gold treatment.

Like the two BMWs before it, this M3 will spend the rest of its first year completing a national tour of car shows. Next year however, it will do what it's been built for: to race down the 1320.

On one hand it has the flawless build quality of a show car, while on the other it has all of the hardware to dominate the drag strip. Kind of like a split personality.

This is SUPER KOOL... how much was spent to build this???? Want to hear the time this car will post...

That thing is mad.

As good as these pics are, they just don't do this car justice. It has to be seen in person, it is simply awesome!!

A true work of art!

a real piece of art

wow a clash of show and full race vary impressive

jesus thats beautiful, id like to see that tearing down a drag strip haha

this car could have been nice... instead its gold plated... it needs hydraulics and daytons to go along with the rest of the terrible its working with

Got to love us Aussies! Pure insanity combined with astounding workmanship makes this car a winner in my books. Can't wait to see this monster in action.

no single typical german "3er BMW Assi" could ever dream of that!

Casey, you got skillz alright.

This thing is a work of art but it definitely begs the question.... Waaahh?

@Leicester Green: The car is known as the 'Million Dollar Drag Car' if that answers your question

And i also would like to know howmuch this all cost

uh... backgrounds for everything....

I have seen the older version of this thing before , in fact i uploaded a video with it here http://www.streetfire.net/video/1664-hp-quad-rotor-monster-bmw-e46-high-6-s_728023.htm

automotive art at its finest!

So much attention to detail...

totaly messed up and ugly to see, PURE waste of time

Are you kidding me?

Sick sick sick. Like the maching color theme as well.

Thanks for the story and pics. I've been in awe of what they have been doing since their first 3 series quad rotor. Mind blowing stuff. Great photography too.

like showcar it looks great, but in action its too G**

Wasn't the expression "If it ain't fast...chrome it" ?

Too much to handle... My eyes and head hurts

amazing. every detail. its inspiring.

wow.... so much attention to detail..

WALLPAPER OF THE ENGINE SHOT IS NEEDED

awesome car, but man my computer doesnt like the nes background

you know some unimaginative hater troll in a primered car is gonna say something stupid like, "that car is a disgrace to drag racing and bmws, blah blah blah."

Don't like the concept at all but it certainly earns my full respect for originality and mind-blowing attention to detail. I wonder how much it cost to build.

So the flagged comments are all the people that think this is bogus?

this is by far the most beautiful thing i have ever seen. period.

one of the best looking drag cars ever!

Very pretty. Now fire the sucker up and make a pass.

Finally Queen St bring out something which isn't pink covered in fuckin Ed Hardy graphics and bling bling crap diamonte 22in rims.. They've finally made something worth looking at and to see this in person is crazy. Top work to the photographer, it's really hard to shoot this car

My God. That thing is sooo clean yet so functional.

Its insane and saw cool it hurts at the same time. Its like 50 cent went drag racing and h'd learnt to fabricate along the way.

What a waste, It's cars like this that give the Aussie scene a bad name.

This is the 1st Queen st car that hasent made me instantly vomit, nice job! what do you think they will use to get the melted gold off the strip, can of parts cleaner??

Good god that is the coolest BMW I've ever seen!

i call bullshit, there is still gold on the brake rotors, and theres no way that plating will hold the temperatures of that motor period. and in a race motor you break parts or your just not going fast, i doubt they pull that thing onto the track EVER!!!

god save the queen

Must be some arab oil millionaire carfreak ore something.

They don't how to lose their money as fast as possible...

But it's an awesome car!

way to go Australians .. these guys are awesome, queen street makes so many quality cars.

OH and it takes a complete idiot to put a steering wheel like that on a short wheelbase car, those are for long wheelbase cars that dont get out of shape as much as a shorter wheelbase cars, its art, but def not function

Saw this M3 at the Melbourne Auto Salon.

Did you see it run on the photo shoot Casey?

That front is BADASS!

I wanna see this beast run! It's too nice to just set there looking pretty. Where's the video!?

can't understand why people are criticising it, jealousy?

when i was in elementary school my friend went to australia and brought me back a copy of autosalon magazine, the queen street E36 was in it. Not really my thing but this thing is pretty rad

saw this at autosalon. COULD NOT BELIEVE MY EYES

saw this at autosalon. COULD NOT BELIEVE MY EYES

Definition that drag cars can be show cars too.

Of all the builds I have seen in my life, this is tops. INCREDIBLE!

whoa!! this car looks "ab.fab" - the detail work looks amazing.. hard to believe it will be raced down a drag strip as it loks like a trailer queen.. pardon the pun - i like it a lot!!

@NISMO FACTORY: No I didn't see it run m8, They still had a bit of work to do before it ran the last I heard, I'm sure its getting close now!

I was quite surprised to log onto speed hunters and see a queen st car on here.

This is an amazing car.

Wether you like what they did or not, that is some incredible workmanship! Gotta respect that

This is the previous 4 rotor on the engine dyno

This is probably the greatest creation to come out of Queen St. I am a Queen St customer, i do most of their photography as well. The amount of time we spent rebuilding this car will blow peoples mind. The car was put back together in 1 week before the annual Motorex show in Sydney.

Not everyone is going to like what Queen St do, we have seen it all before...at the end of the day, this car has everyone talking. In terms of it being run as it is, it cannot. With the gold plating, it can run. HOWEVER, believe it or not the only parts that will be affected by heat are the exhaust manifold, dump pipe and brake rotors so obviously they will all be changed.

The car is currently doing the show circuit around at major Australian car shows and events. Next year this thing will hit the track, hopefully for a 6 second pass

Guys, for more info on the car and Queen St, check out http://www.queenstcustoms.com.au

This looks like such a guido drag car. Yougottaproblemwitdat?

Not really into drag racing but this is engineering excellence, well done Q-St.

fyi when it competes there will be some changes, i.e. the steering wheel and turbo housing will be swapped out. the rest of the car will race as is. don't worry about melted gold on the strip lol. but it WILL race.

holy fuck the detailing on this left me speachless with shivers running down my back ....