It's sometimes difficult to remember that the origins of this year's GT series lie in endurance racing rather than bare knuckle boxing. Cars go out, pristine, clean, shining. They come back broken, beat and scarred. Patched up in the pits like fighters, they're then they're thrown back in the ring for another round. It's rough out there.

Of course, first corners are typically the place where the elbows start flying. Everyone knows the old adage: you can't win a race at the first corner, but you sure can lose it. Winning the race – you're doing it wrong.

The first corner at Portimao has plenty of run off but if you get that one wrong it's game over for the second turn, an even faster right-hander. You've got to keep your foot in, but once you're off the track, the chances of coming back on line anytime soon are minimal.

Especially if by then you're facing in the wrong direction. Winning the race? You're still doing it wrong.

The Qualifying Race looked good for Sumo Power right from the start for #23 at least, after they were promoted to second place on the grid following penalties for other cars. Having a Cosmo model (complete with suitably egotistical fashion photographer) in front of the car was a nice distraction. Drivers normally like a clear view of turn one; here, Michael Krumm was likely not so fussed about the obscured view.

At the off the Phoenix Corvette blasted away from pole with #23 close behind and a pair of Vitaphone Maseratis menacing behind. In fact there were all four MC12s in the top seven.

The final turn sweeps down from the rolling switchbacks at the top of the track in a long arc onto the start straight.

But even the start at Portimao isn't flat: as the track straightens it rises to crest where the grid is formed only to drop steeply away into a dip before the first corner. Flat and featureless are not words that apply here.

Jamie Campbell-Walter and Warren Hughes had another hard fight to make up for poor qualifying: #22 would be in 9th by the flag – up from 22nd! A great job, but getting quallies right would make their lives a lot easier…

Another stunning drive was put in by the #5 Matech Ford GT of Richard Westbrook and Thomas Mutsch: they cut through the field to finish fifth after starting 21st!

After the pit stops for driver and tyre changes, #13 had held a shrinking lead over #23 and #1 with half the race still to run. The three cars circulated nose to tail for 15 minutes or so, constantly darting around looking to make a pass. Dumbreck finally got the Corvette after selling him a dummy into the first corner. Bertolini came with him and took second – #1 kept the pressure on till the end, but Dumbreck was able to hold the MC12 off.

So, a maiden win for the #23 pairing, to go with #22's inherited Championship Race win at the Silverstone round!

The only bad thing was that there's no podium for the Qualifying Race, no champagne spraying. Maybe the next day?

Saturday's Qualifying Race may have delivered what will become the defining race of the 2010 GT1 season on a track that was the perfect match for big GT cars. 34 laps where I didn't get a chance to put the camera down once! Be sure to check it out on the GT1 web TV site.

The FIA GT3 pack were out in force as well, with two races over the weekend: it was all about Porsche and Corvettes. The Porsches looked and sounded great. The Corvettes? Not great liveries, and the GT3 cars just sound *wrong*. Still, I'm not saying they can't look good at full tilt!

The pole-sitting Callaway 'Vette was mobbed at the start by Muehlner and Prospeed Porsches, but managed to keep in touch and get back into second just before the pit-stops.

The fleet of Audi R8s seemed pretty strong here, but just couldn't manage to use their numbers to get up front.

Everything had looked good for the #76 BMW: Patrick Soderlund had driven the wheels off the Z4 and was up to eighth by the pit-stops. Linbergh and I were in the pits watching the stop: it was fast and clean – Edward Sandstrom was strapped in and smoking out of the pits in double-quick time. But it was too quick. Patrick's elation on the pit-wall turned to desperation as a penalty was handed out for the car being released before the mandatory minimum time.

The team could barely look as Edward #76 idled back through the pits to serve the penalty. In a double blow for Team NFS, #77 suffered a puncture and was forced to pit again from third, dropping right down the order. Two great results lost.

But up front the #61 Prospeed Porsche stroked home to victory in race 1, pursued at a distance by the whistling #101 Callaway Corvette.

Edward hadn't given up though. The rumbling Beemer seemed to gain a place every lap as the hour ticked away: he was on fire! Every time he sailed past me Edward was lining up another car: he somehow got the Z4 back up to eighth place by the chequer. Truly epic!

As he climbed out of the car in Parc Fermé at the end of the race it was pretty clear just who much effort he'd been putting in. The swimming pool by the cars must have looked pretty tempting!

This meant that Daniel Keilwitz and Christian Hohenadal not only took the winners' trophy but also the 2010 European GT3 title as well with one round still to go. Not a bad weekend's work.

Edward Sandstrom in #76 had gained four places on the first lap alone and by lap five was up to an amazing seventh place! Patrick took over at the stop on lap 20 – and pushed the BMW up to an incredible second place on lap 25. But once again it was frustration for the team: it was #76's turn for a puncture and the car tumbled down the order to 13th.

Following on from GT3 was the main attraction: the GT1 Championship Race. There's no question that this race that really should have been #23's after they led from the rolling start.

After a solid first stint by Peter, the pressure was on for the pitstop: but a failed airgun cost the team valuable seconds and dropped the car right back into the pack – and handed the lead to the #1 MC12.

#22's race was even worse: it only lasted two laps before a power steering leak put the car off. But at least they lasted longer than the majority of Italian cars. Once again the Lamborghinis and Maseratis suffered. #38 was collected by the #2 Vitaphone Maserati into the first turn on the first lap and deposited in the gravel, whilst the #2 immediately retired. Scratch two.

The #34 Triple-H Maserati suffered a puncture just a couple of laps in… Scratch three.

#37 almost made it to the end, stopped with a couple of laps to go and retired. Scratch four.

At least both Reiter cars ran strongly (and together) for the whole race, finishing seventh and eighth.

They were joined by the #33 MC12, which finished just behind the flaming Murcielagos.

The #5 Matech Ford GT had another great charge and closed right up to Bartels in the closing laps. Going in the other direction was Tomas Enge in the Young Driver Aston Martin DBR9: I've never seen a car suffer so much from tyres going off. He dropped like a stone after running out of fresh tyres for his stint.

The paddock is saying that the championship is already Vitaphone Maserati's (yet again – they won in 2009. And 2008… in fact, they've won every year since 2005) but that doesn't make the racing any less exciting or unpredictable. It's only two weeks until round 8 at the Navarra circuit in Spain. I can't wait! 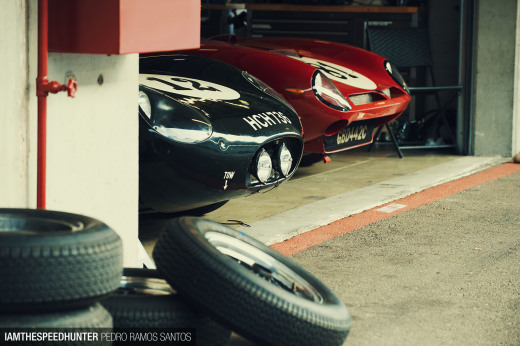 The first shot may be one of my favorite shots.......ever. It drips menace.

You sir, have some absolutely amazing shots here.

I've got a few shots of the Sumo Power car and the Z4's (plus "someone" caought photographing the NFS Z4). Where should i send it to?

love the heat haze in this shot