SpeedHunting and consequently SpeedHunters, are all over the planet. None of the continents are safe, one minute it is Bonneville, next San Luis, the next Monza, but this frenetic travelling grows less and less attractive, the more it is experienced. If I never see the dump that is London Heathrow and its peculiar inhabitants again, I would be very happy. So finding a motoring activity that takes place in your backyard and involves minimal distance to cover is a wonderful thing. Earlier this month the first Chelsea AutoLegends was staged in the agreeable grounds of The Royal Hospital, along the Chelsea Embankment, in the heart of fashionable London.

For many of you, this will be the first exposure to the venerable institution that is The Royal Hospital and the Chelsea Pensioners. The Royal Hospital was opened in 1692 and is a retirement and nursing home to former British service men and women. Designed initially by Sir Christopher Wren, the buildings are in need of extensive refurbishment. This formed the catalyst for Chelsea resident and long time Le Mans fan, Michael Scott, to conceive and then create a show that brings the flavour of the world's greatest race to Central London.

No one, even the organisers, knew what to expect. Would the public flock to Chelsea? What would they exhibit? Would the event raise much needed funds?

The answers were all resoundingly positive. Over 6,000 paying punters crossed the turnstyles, the Bonhams Auctions were successful and a handy sum of money was raised. Best of all, the reaction from all those I spoke to was overwhelmingly positive, a new show has been born.

There were exhibitions of interesting and rare cars as well as the ranks of those racers that had competed at Le Mans. Here is an avenue of Italian swagger and style with the Battersea Power Station forming an unmistakable backdrop.

Even on the morning of the event, surprises were in evidence. The 2003 Bentley Speed 8 that won Le Mans that year, made an unexpected appearance, completely unannounced.

Evidence of the long involvement of both Bentley and Great Britain with the Vingt Quatre Heures du Mans was provided by the Bentley 3 litre that raced in 1926.

Not to be outdone on the heritage field, Aston Martin had examples of Le Mans racers past and present on hand.

Our lead shot had those other great British names that achieved so much at Le Mans, McLaren and Jaguar. And what event dedicated to speed could be complete without a Ferrari or two or three. This 365 GTB, more commonly known as the Daytona, is a fine example of 70's GT racing.

And who could not fall for the sleek curves of this motoring answer to Sophia Loren, a Ferrari 268 SP from 1962.

Wherever Ferrari race sportscars, Porsche are sure to be found. A Konrad 911 GT2 from 1998 heads up an exotic line up.

This rare Porsche 908/2L finished second at Le Mans in 1970 in the hands of Rudi Lins and Helmut Marko. Nestling behind is Porsche 956-003 which managed one place better than the 908, taking Vern Schuppan, Al Holbert and Hurley Haywood to victory in 1983. 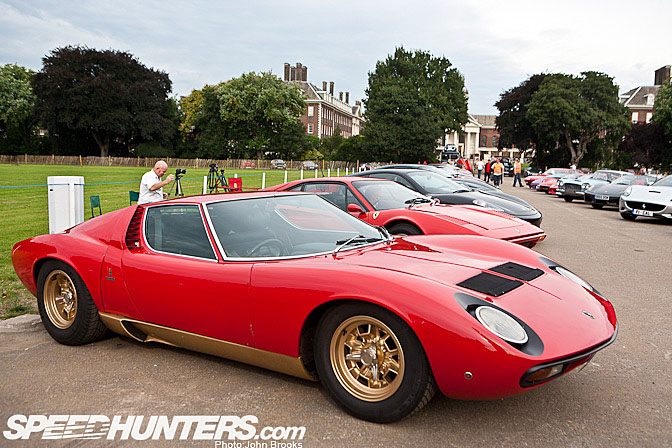 The event was also a celebration of exotica such as this Lamborghini Muira SV, simply stunning.

At the other end of the collectable cost level is this fine Lancia Fulvia Sport with Zagato styling. It is a worthy companion to the Ferraris parked next door.

More heroes from Lancia, a Monte Carlo sits with its younger sibling, the Delta Integrale. Fabulous.

There is no doubt in my mind that this Lamborghini 350GT is one of the most desirable cars on earth, a real gentleman's carriage. It is grand-daddy of all the Lambos that have brightened up the motoring scene since the brand was launched in 1963.

Is this what Ferraris would have looked like if Henry Ford ll had managed to buy the Italian manufacturer back in the early 60's? A De Tomaso Pantera.

There are a few similarities to the F40.

Ferraris at the gate.

Another tasty treat on sale at Fiskens, a Ferrari 275GTB, yum.

The world of commerce is never far away, with HR Owen offering up a selection of supercars, and the gentle residents of Chelsea have the moolah to afford such automotive works of art. The 458 is now apparently cured of its arsonist tendencies, it is hot enough just parked up on the lawns.

This Old Soldier, who has not faded away, declared that he wanted the Bugatti for Christmas, it would be a mean Old Santa to deny him.

Despite my evidence to the contrary, the Show was not all Italian, it just felt that way at times. Porsche, as might be expected, were on parade.

Old and New in the shadow of The Royal Hospital.

If it is Chelsea, there must be an E-Type lurking somewhere, this one a V12 example.

Although the AutoLegends had a distinct Le Mans' theme, the car nut business is a broad church, off road heroes have their place, like this Lancia 037.

Another classic Italian, the Lancia Stratos HF. I understand that 2011 will see a revival of the Stratos brand with a limited run of machines powered by the V8 from the Ferrari 458…………..I really must win the Lottery, actually I did last week, but the £5.90 I received won't even by a scale model of this iconic machine.

Retail therapy is one of the boom industries in these troubled times but you would need a banker's bonus to afford this top notch luggage.

Horology is an essential part of motorsport and of any show.

And light refreshment is always on hand.

One of the principle themes of the 2010 Chelsea AutoLegends was a celebration of the 40th Anniversary of the making of the film "Le Mans". Steve McQueen's epic homage to the World's Greatest Race still captures the imagination, the coolest guy on the planet, racing the coolest cars.  So we had a brace of the protagonists on display at the main stage, a Gulf Porsche 917K and a Ferrari 512S.

In the Bond movie Goldfinger, the principal villain declares "Once is happenstance. Twice is coincidence. The third time it's enemy action."  Perhaps that should apply to the Porsche 917 and SpeedHunters as it is 917-013. This what I had to say about this particular 917 last month:

…a genuine Gulf Porsche 917, originally chassis 917-013. It is maintained by Barwell Motorsport and by a strange co-incidence was featured earlier on SpeedHunters HERE.

In 1970 the car was one of the stars of the Steve McQueen epic "Le Mans" having been sold to Solar Productions for the making of the film. During an action sequence there was a severe accident that cut the 917 in two, grievously injuring the driver, David Piper. Porsche rebuilt the car, using chassis 034 and the renumbered car was despatched to the Gulf Porsche team of John Wyer.

It was entered in five races, scoring four wins and a second, not bad for a second hand car.

Now it was to be found on the lawn at Chelsea.

On the other side of the stage was the Ferrari, drop-dead gorgeous with its Red Rims. 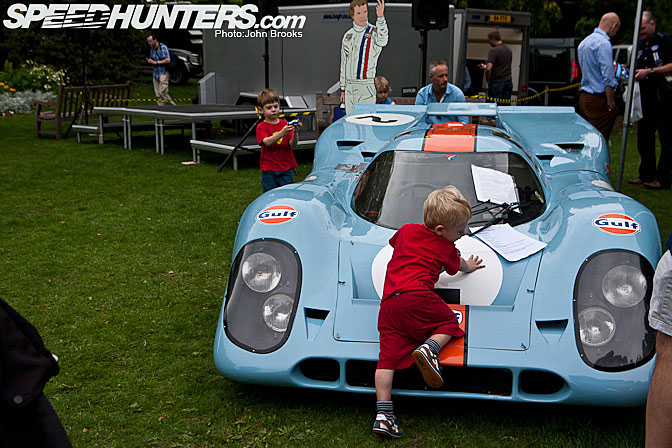 Both machines attracted lots of attention, not necessarily for their original attributes. 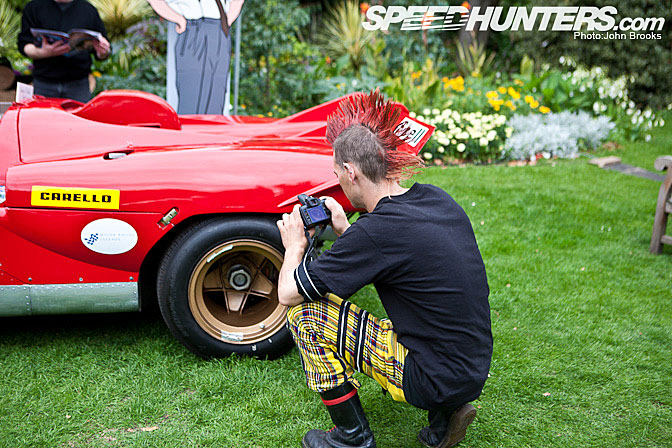 Matching plumage, one of Chelsea's other famous residents, does his David Bailey act.

One of the stars of the film, Derek Bell, tells his tale of how the stunts and action sequences were shot. Fantastic.

Once again the stage is surrounded as Sir Stirling tells of Le Mans in the 50's. Considering that less than six months ago the 81 year old sustained multiple fractures falling down a lift shaft at his London home, he looked pretty chipper.

And how can mere words describe, the courage, the endurance and sheer bloody-mindedness of a man like Major Phil Packer? In 2008 he was left without the use of his legs and classed as paraplegic after being the victim of a rocket attack in Basra. He has since dedicated his life to helping others, raising money for good causes such as "Help for Heroes". In 2009 he completed the London Marathon on crutches, taking 14 days and raising huge sums for charity. Meeting someone with his qualities is a humbling experience. With Phil are the BBC presenter Kate Silverton and 1970 Le Mans winner (in a Porsche 917) Richard Attwood.

On a lighter note, all round petrol head and Jamiroquai front man, Jay Kay, enjoyed the relaxed and informal atmosphere.

The hat has a familiar quality to it……..must be the look de jour.

A final look at a pair of Le Mans' Legends, the Rothmans Porsche 956-003 and Derek Bell, a winner of five Le Mans 24 Hours races. Incroyable!

The good news at the conclusion of the 2010 Chelsea AutoLegends was the announcement of the 2011 date, Sunday, September 4th. Be there.

The Realities Of Clean Air Zones: London’s ULEZ, One Year On

Now this Blog has made my week, what a plethora of goodies and top quality photo's!! well the Alfa Romeo SZ is one the only Alfa's i'd "love" to own.. plus the De Tomaso Pantera was one of my fave 'Matchbox' cars as a young kid - Hey and talking about Jay Kay?? he has a awesome collection of cars!! what about a guest blog by him? - just remember who gave you the idea LOL - Thanks

Is this labelled under pornography? It's making me excited in my pants.

this is what i love about speedhunters... great article

Ohh yes I shall be there! (Hopefully)

what a fantastic event! And superb coverage Mr. Brooks!

jbab ,,, Hi Jbab, why would they not be popular across the pond

Kind of make Cars And Coffee seem like just a... parking lot?

That Lola-Aston Martin is perhaps the prettiest LMP racer out there.

Kids climbing on cars worth over a million as if it's a playground. Where are there parents at?

Dear god this was one of the best articles you guys have EVER produced....

i am absolutely LOVING all the coverage of british classic/motorsport events! so much goodness to be found. It's also nice to see some faces of the people who attend these events. I look forward to next year's installment!

I missed the greatest show ever stratos , lmp1 , dbr9 , ferrari's & more and i missed it what am i doing with my young live!

Glad you all seemed to like what you saw. Just to say Chelsea AutoLegends will be back, both bigger and better on September 4th 2010 so put it in your diary now. Eric

Great coverage, looked like a fantastic event, making good use of the grounds. Looks like it had a real community feel to it, plus it's great to see these cars being put to good use and not just taking up garage space.

The 275 GTB is the prettiest Ferrari ever IMHO, great to see one even in a photo. But that 037 is the one I'd try and smuggle home.

The refreshment mini van is nice.

awesome, John says that the porsche 917 has featured 2 times now but its 3 times, the car stands in Musee de Spa Francorchamps and John have seen it over there!