An awesome day was ahead for both myself and Robert as we took to a road trip along the East Coast of Australia.

I'm located in Brisbane, Australia a.k.a the Sunshine State and I thought it would be a great idea to guide you from my native Queensland to The Gold Coast and Byron Bay. The Gold Coast stretches out over the east coast of Queensland, however Byron Bay is located just over the New South Wales border.

With the help of a mate's trustworthy Toyota AE86 there was nothing holding us back!

Having the day rostered off work usually means sleeping in until midday and relaxing for the remainder of the afternoon. Getting up early from underneath my warm blankets however was not a hassle. With a gorgeous, crisp and clear winter's morning, it was a perfect time for a road trip!

The 7-AGE ticking over gave me quite a thrill. Whilst I was molding myself into the stock JDM coupe seat, I pulled out the camera and prepared myself for an awesome adventure!

We started making tracks around 9:00AM, filling up the car and jumping straight onto the new and improved Centenary highway. This highway links onto the Logan motorway which merges onto the Gold Coast motorway, also known as the M1.

Veering off the Centenary highway onto the Logan motorway the 7-AGE started to stretch it's legs up to 100KM/H. We were well underway for our road trip!

Traveling along at our own pace, this stock Porsche slowly cruised by us.

Veering off the Logan motorway onto the overpass, merging onto the Gold Coast motorway (The M1). This used to be a two lane highway, but has now been increased to a four lane highway. With convenient highways like this it makes trips up and down the coast a breeze.

The sign we've been waiting for! Surfers Paradise … doesn't that sound nice?

As we entered the Gold Coast Shire the fun begins! Running along side the M1 are a variety of theme parks. Dreamworld is a major attraction on the Gold Coast as well as Movieworld, Wet 'N' Wild and Seaworld.

We ended up pulling into Dreamworld for a quick peek! It looked extremely busy for a Tuesday, the car park was near capacity!

Robo's Sprinter in front of the entrance.

Heading back onto the M1, the rules for our highways are like so.

Cruising up alongside our old school corolla was this gorgeous old BMW.

Taking exit 77 (Seaworld, The Spit) exit, is when things start to get very exciting. You can see in the distance the high-rise apartments which run along the beachfront.

We turned right at this set of traffic lights onto the Gold Coast highway. This road not only runs behind all the high rise apartments, restaurants and shopping malls but a large part of the road makes up a section of the Indy Grand Prix track.

Making our way over the river, the high-rises become more visible.

Turning left off the Gold Coast highway onto the esplanade. This is the road that runs parallel to the beach.

Stopping at a wide open area at Surfers Paradise I took more photographs of Rob's AE86. We simply couldn't have asked for a better day. Don't take note of the rear guards, they're still in progress!

Back on the road, heading down the esplanade we saw an Aquaduck. You might not be familiar with this but not only is it a bus, but also a boat which does tours all over the Gold Coast area and then out into the rivers and oceans. It is definitely something to experience if you're planning on coming to Australia!

Continuing down the esplanade those tiny buildings become slightly larger and greater in detail.

Another BMW cruising down the beachfront, he definitely had the right idea with the top down!

This building is Q1. It is the tallest resident high-rise building in the southern hemisphere. Ranging just under half a kilometer in height.

As our stomach's began to eat themselves, lunch was calling! Noodle Box was a perfect idea, especially on the beach.

Only planning to go from Brisbane to the Gold Coast, after we finished lunch and had a walk around it was still quite early so I suggested that we drive down to Byron Bay before dusk. Here we are again, continuing south on the M1.

60 minutes flew by and we had already taken the exit and before we knew it we were on the road that leads into Byron Bay.

This is the main drag, filled with restaurants, gift, surfing and photography shops. It is such a relaxing place.

As we continued through the town, the sun was starting to descend and we wanted to be at the lighthouse lookout for the sunset. The AE86 sounded great travelling through the never ending forests. Whilst enjoying the views on the way up I thought to myself "I really wish this time of the day lasted longer than it does". It is just so gorgeous.

Parking up the AE86 amongst a Hyundai Excel and a Mitsubishi Magna we made our way up to the lookout. Check out that background, the hinterland is so amazing along the coast.

As we headed up to the lighthouse lookout, not only being an
unbelievable view. Where we were standing was the most Easterly point
of the Australian mainland! 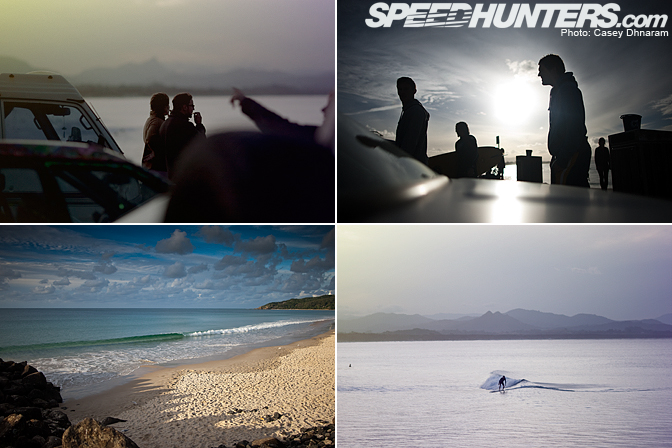 Here are some of the gorgeous sights of Byron Bay. It is by far the most relaxed and chilled out town I've ever visited. A Tuesday afternoon with people scattered everywhere amongst the beachfront listening to music and watching the surfers.

I'll leave you with this one, final image. It is a shot from the most Easterly point of Australia looking out on the ocean as the last few surfers catch the last few sets of waves before it turns to dusk.

I really hope you enjoyed this article and I hope it gives you a bit of an incentive for some Australian sights. Huge thanks to Robo for the use of his AE86 which got us there and home in one piece.

" AE86 amongst a Hyundai Excel and a Mitsubishi Magna "

Australians sure know how to live it up.

they have a bunch of aquaducks in seattle, wa too.

in pittsburgh we have "duck tours", which are basically old WWII amphibious vehicles turned into tourist attractions. pretty cool. http://www.justduckytours.com/

these kind of articles really make me love cars, just crusing about taking pictures, and just living life. keep it up.

I love this post,it makes me travel!

So now it's Eigty-Sixteen day? What, if you throw a rat out of its hole on August Sixth and it sees it shadow, then crapola day lasts six more months... If it doesn't see it's shadow, crapola day only lasts 179 more days... Either way, site content goes down hill fast...

so where's the speed?

Epic!!! Relates so so much to me as I live in Ballina just down the road from byron. One of my fav things is going up the coast with some mates just for the sites and sounds.....pretty much the opposite trip you lads did.

the hottest girls are on the gold coast!!. sweet photos!

Beautiful pictures, really; but what does this have to do with SPEEDHUNTERS?

There has been SEVERAL posts in the past (and recent days) where bloggers just write stuff that has nothing to do with "speed" nor "hunting."

Oh I'm sorry, I JUST realized that there is a AE86 in the article. so I guess that's fine?

Same, makes me want to travel. That pickup/van was with you most of the journey from what it looks like, nice shoe!

Nice pictures and write-up, Australia seems like a cool place to live!

Just a little thing that bothers me: The contrast is too high in some of the pictures in my opinion; taking clearer/brighter pictures would not be a bad idea.

In response to Alex's comment, "Beautiful pictures, really; but what does this have to do with SPEEDHUNTERS?".

I would like to say, that for me, Speedhunters is about car lifestyle. Not just racing or high powered cars, but also the little joys that you get from spending everyday with your pride and joy. Enjoyment in cars can be had on the racetrack, the car show, the local hangout or even on a good roadtrip.

If you don't enjoy or feel excitement driving your car on a lazy day, then I pity you. You are really missing out on a big part of owning that you can connect with.

Great post Casey and Robo. As soon as it warms up here in SA I'll be taking every opportunity I can to enjoy my AE86 out on the open road.

Killed it man, great shots.. was a top day

shall i take some pics of my trip up the freeway each night or maybe the coast as i drive to work...

Awesome pics! Wish we had places like that... makes these roadtrips so much better!!

Great pictures there. From down south in Melbourne and haven't done a decent road trip up the east coast in years. Its definitely motivated me to do it again.

Nice pix, that's one of my favourite drives. Do it way to often though!

Is that the 86 you did the home job guard flare on?

Gee I live in a great spot. 40mins to the Gold Coast ... 40mins to Byron. This day off trip makes me think of the quote "Life moves pretty fast. If you don't stop and look around once in a while, you could miss it." (Ferris Bueller)

pretty boring, theres about 7dash shots and 7 camera out of passenger window shots, i think your concept is good, it is about car life but with a half completed car and uninspiring highways it gets boring quick.

a mountian run story sounds good or windy roads at least but this misses the mark. i dont know what its like there but i guess mountian names would be under wraps so people dont abuse the good locations, they could be done without names.

a bunch of post processed shots dont make it a win either, you have skills but need a little more development in your ideas and less development of the shots on the pc

You guys that comment on here about why is there an 86 in here when its past 86 day, or how this has nothing to do with speed or hunting, are full of shit. Are you saying that the 86 can only be posted on here on August 8th, and no other day?? And what is the big deal about the setting not being a racetrack without racecars? Grow a pair and quit complaining

I road tripped it up to the Gold Coast earlier this year, such a nice drive! And even in winter it's beautiful and warm up there =] better weather than down here in Sydney!

Great shots, enjoyed the read. To the haters... If you don't like the post... simply skip pass it, It's not a very difficult thing to do? Why whinge.

Road trip experience are unforgettable.Even though Australia is
my own country & I live in the most amazing city.
<a href="http://www.mechanicwaverley.com.au/%E2%80%8E">Vehicle Inspection & Testing in Glen Waverley</a>