It's not quite clear why, but the D1 organizers had a little surprise at Ebisu Circuit for us during Round 5 this past Saturday. They decided to change the line leading into the famous Minami Circuit drop, effectively removing the little kink and allowing drivers to carry even more speed than usual. The result? Mind-blowing action throughout the day, with the bravest drivers getting a few wheels in the air before landing sideways, others getting caught out by the higher speeds with some pretty wild crashes.

It was Hibino who took the win on the day, after a series of great runs in the Best 16, ending in a very well fought battle…

…against Ken Nomura. The win allowed Hibino to move up into 5th position in the leader board, with Nomuken securing a second position standing, 16 points behind Imamura.

It was great to see that Itakura, with the H.D.O. Celica GT liftback, made it up to Ebisu all the way from Hiroshima, a great and pleasantly unique addition to the D1-GP line up.

Most drivers were trying to get used to the new line D1 officials introduced on the day, with a few struggling to string together the faster entry speed with the rest of the clipping points on the main judged corner. Kumakubo was just not feeling it and was unable to make it into the Best 16.

The main judge, Keiichii Tsuchiya, leading the pack during the opening ceremony.

One driver that was absolutely killing it during the practice and qualifying session was Yukio Matsui in his NAPREC S15-front RPS13. He had been absolutely flying over the drop, lifting both front wheels but during his Best 16 tsuiso run against Murayama, it all went wrong. As soon as his car compressed hard onto its suspension it instantly straightened up, sending him at full speed against the dreaded Minami wall. The car suffered very serious suspension and chassis damage, but somehow his mechanics were able to fix the car for Sunday's Round 6!

Team Orange driver Naoto Suenaga was on fire, nailing some near perfect runs all day long. He didn't quite comprehend the decision for the dangerous, yet thrilling, new line but did the best he could to adapt to the new requirements.

In the Best 16 he went against Daigo Saito, losing due to a simple mistake that made him lose his line for a split second, giving the advantage to the JXZ100 driver. Saito had been literally shocking everyone with some of the most outrageous and aggressive entries throughout the day, things I had seen him practice a few months back during the Spring Drift Matsuri. Since we were banned from shooting along the wall due to the dangerous speeds you should check this video Andy at Powervehicles.com took to get an idea of just how fast everyone was entering the Minami drop!

This was the best angle I could get on the day! Fukuda in his S15.

This is simply one of the most extreme D1 builds ever…

…but Ueno wasn't quite feeling it during the day.

D1's megastar, the great Manabu Orido during one of his entrances!

It was cool to catch up with fellow countryman Federico Sceriffo, over for his second D1 round during this 2010 season. He was back behind the wheel of his Team Orange LHD Impreza, set on bettering his performance from last year's Ebisu round. But things went a little pear shaped on his second pass during the morning practice as the transfer box on his transmission decided to spit out a few teeth.

This is what the damage looked like. At least he did a good job at annihilating both cogs!

Gotta love the tri-colored oblique mohawk. Maybe a mullet as well next time?

With the August heat making sure everyone got nice and baked, it proved hard to keep the cars cooled and most teams were spraying or even pouring cold water onto oil coolers and radiators as soon as the drivers came back to the pits.

Masao Suenaga made it all the way to Best 4, losing out to Hibino who was squeezing every little bit of performance form his heavily nitrous-injected 4AG.

Saito's JZX100 usually churns out so much smoke that most of the track remains covered by slow-moving tire-smoke for minutes after his pass.

It was kind of this that made it hard to see the massive impact that Akinori Utsumi had in his 180SX-front S15 during their Best 16 battle.

I know a lot of you guys like this car, but it isn't looking too hot at the moment. Much like Matsui, it was one hell a hit!

You will have to wait for a spotlight on this cool little KP61 Starlet, the perfect car for our current oldschool theme…

…much like Itakura's cool RA28, but we've already taken a look at this back in Okayama.

No, vertical tail lights are not a new style in Japan, that's what a soft-ish impact with the Minami tire-wall will cause!

Trying to give you an idea of the smoke trails these guys were creating.

I've got more Best 16 action for you in Part 2 as well as the obligatory walk through the paddock to check all the girls…ehm…sorry, stands and cars in the pits! 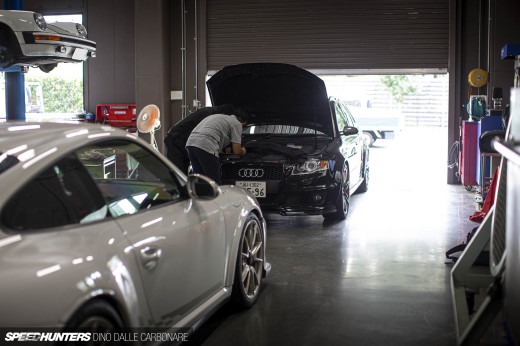 Love the picture with the judges. Thought it was some mafia or yakuza or something hahaha.

Can we get more coverage on the 3 rotor RX-7 ? Loving the posts!

Ebisu used to be an AE86 track until Kumakubo added the kink before the Minami drop. AE86's couldn't carry enough speed into the judging section because if they drove the kink too fast , they would drift into the wall. Now that the judges allowed cars to cut through the kink to carry more speed, the AE86 was able to win again at Ebisu. Hopefully D1 has more tracks that favor the AE86, Celica, or Starlet.

" Since we were banned from shooting along the wall due to the dangerous speeds you should check this video Andy at Powervehicles.com took to get an idea of just how fast everyone was entering the Minami drop! "

Here is a cool video from inside that wall http://www.youtube.com/watch?v=KZIxMWxTaow

nice coverage! great to see an 86 (even with big wheels lol) take the win

That Minami kink was epic. Every drift track should have a jump!

an AE86 in the victory circle? ***looking at the nay-sayers from the previous 86 threads this week lol***

another request for first pic background

can we get wallpapers of Hibino's and Daigo's pictures?

Awesome work "D", what a great weekend. Next up is G1 GP and Matsuri in a week and a half!

Can we get a wallpaper of Saitos "Aggressive line"?

About time Hibino won at Ebisu...he was the original flying AE86 driver, slthough I wouldn't know if Ueo also had the same sort of aggression.

CONGRATS to Hibino!!! After almost 7 years of trying he finally gets his win :):) HELLS yes!

Imma get drunk !! Celebrate with them Four Loko's

Love the coverage Dino! Would love to see Nomuken win one though!

Can you get anymore pictures of Matsui but looks like Yokois new S15.3 that crashed?

what the hell happenes to the celicas N1 flares? O_o

and its nice to see that KP in action again and with proper vold TE37v's this time.