The 80s … Personally I hated the decade. Atrocious fashion, bad hair and limp wristed soft rock are my main memories and problems with the years that followed the glorious 70s. But one of the things that stops me assigning the whole decade to the metaphorical dustbin is my memory of the Group B rally days. The forests of Europe were alive with the sound of 500+ horsepower turbocharged monsters ripping through seas of spectators at barely believable speeds. Such was the power and pace of these incredible cars, the mental strain warranted the need for shrinks to look after the mental state and well being of the drivers in service halts. To see why I am all bleary eyed and sentimental over this bygone era just watch this short film … Pure petrol head porn!

By 1985 Rover had decided it wanted a piece of the Group B action. In true British 'men in sheds' tradition it took its best selling city run-around the Metro and created the MG Metro 6R4.. The basic shape was the same but that was the only similarity left. The aging asthmatic 1 litre A' series was taking from under the bonnet and thrown in the bin and replaced with a Williams designed 3 litre V6 unit. Mounted longitudinally where the shopping space used to be and attached to a four wheel drive drive train Rover created an 'F1 car for the forest'. However By 1987 it was all over. Some very public and well documented deaths of drivers and spectators alike signed the death warrant for Group B and the class was promptly banned.

With Group B shunned by the rally world for being one notch too high on the crazy dial, the cars were embraced by the Rallycross world. And that brings us neatly on to Mark Pollard's mint example. Although many kits and conversions are available, the car you see here is a genuine MG Metro 6R4. The car had done no forest work when Mark bought it and originally planned to run it in rally cross / rally events. He then discovered the Time Attack series and with the help of 6R4.com the car was built to full tarmac spec to compete in the N/A class. 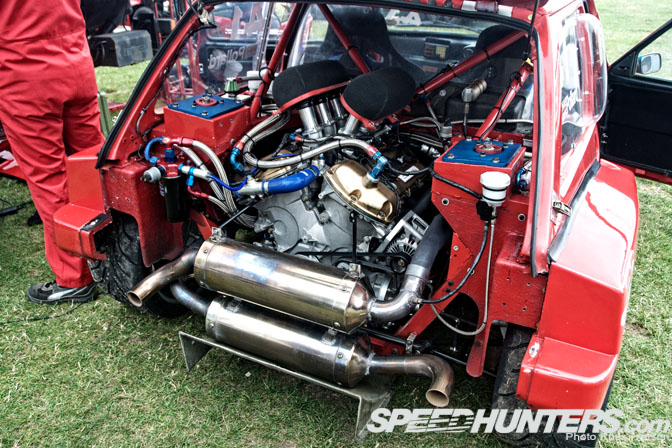 With original engines being a little harder to find than hens teeth. The unit you see here is normally found in Ford's 'Dame Edna Everage'  incarnation of the Mondeo, the Jaguar X type. The 3 litre V6 was expertly shoehorned into the boot space with everything made bespoke by 6R4.com.

Producing 380hp and driving all four wheels it's no surprise that Mark is leading the N/A class of the 2010 Time Attack series. It's an astonishing feat on engineering from Austin Rover and 6R4.com that the engine fits in and works. Its indicative of the craziness of the Group B era and one of the things I love about it.

Inside there are still little hints of Metro left … Well the dash shape is vaguely the same. Look at the distance between the top of the steering wheel and the windscreen.. It gives you a idea just how small these cars actually are.

The space where the nasty little A' series lived in the original shopping special now houses the fuel and cooling system.

It's fantastic seeing the 6R4 holding its own against modern machinery and with a twin turbo 600hp conversion on the cards, the car is the embodiment and spirit of the Group B era… The ultimate pursuit of speed. 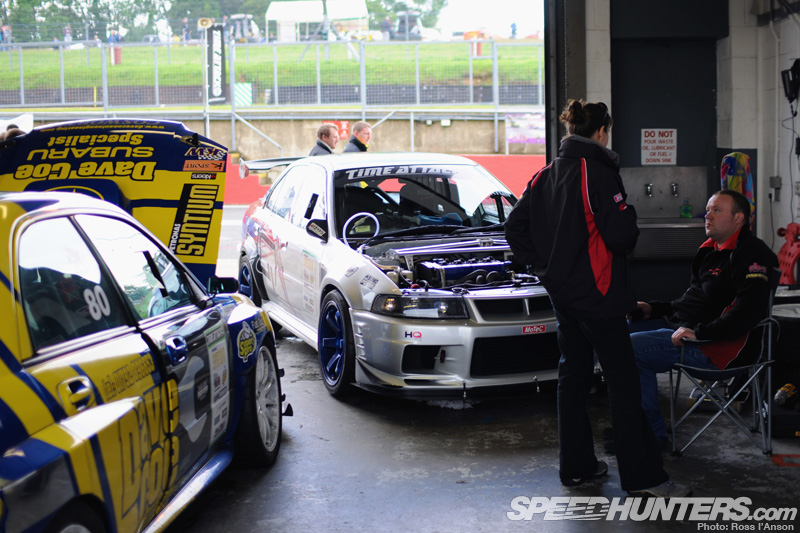 The Power Plants Of Time Attack

NA is BEST!!! That thing must be a hoot to drive. Especially with the intake right there behind your head. I love it!

Nice to see you Wrighting about the 6R4! I've not seen them doing anything other then Rallying(much much better compaired to Todays stuff!) and the V6 can pack quite a punch as well!(the same V6 was used in the Jaguar XJ200 of all things later on!)

That thing is just plain crazy. I approve.

I think it is GREAT to see these older cars compete against newer one and still remain competitive... Just goes to prove that not that much has changed over time. What worked then, still works now... Great Looking 6R4 !!

This is why British cars are just the best

Awesome article, Great car. The 80's had a lot to offer in racing, Group B and Turbo F1, 80's was the era of low restrictions and lots and lots of power.

Incredible car! and if thet video dosn't get your heart pumping you must be lying in a morgue.

Epic car from an epice era.

@ross to give the a series its due when modified it can knock out nearly 200bhp when modified and a bmw motorbike cylinder it a popular conversion for them.

But i do love the 6r4 and you are right about the original engines being rare. I hope too see more group b cars on here aswell.

The Lane Motor Museum in Nashville, Tennessee has a black one (http://lanemotormuseum.org/mg-metro-6r4-1985). I haven't driven it (yet!), but it is fully operational like everything else in the museum.

first time i saw a 6R4 was at a rally event and i thought they were some ugly little creatures but boy did they sound good and moved incredibly quickly. Technology as allowed rally cars of today to be as fast overall like Grp B cars of yesteryear, but those cars were just raw untamed animals

That is absolutely amazing.

awesome! love this era of rallying.