Sportsland SUGO, one of the lesser known Japanese tracks when it comes to international competition, but a fixture on the domestic scene. Located about 300kms (200 miles) north of Tokyo, it is set in a lush, verdant region – where there are thousands of bugs!

The first thing that comes to mind is the changeable weather. In a given day it will definitely be sunny, but it will also rain. There may be occasional foggy moments, sunny patches, and then rain again. And the day will end under clear skies. Typical.

There's always a strong local crowd at SUGO and the Pit Walk and Grid Walk events never fail to sell out.

One of the talking points this coming weekend will no doubt be the performance of Honda's newest challenger, the HSV, making its debut at the hilly track.

The following year Nissan debuted its mighty GT-R, with the hopes of finally breaking its SUGO duck. The track had been a real thorn in the side of Nissan's aspirations for years – being the only circuit in Japan where, throughout the entire JGTC/SUPER GT era, the make had never won. Alas, the top-finishing R35 was only eighth. The four other GT-Rs all finished – though in 11th to 14th places. It was not a good day.

So to 2009. One can easily imagine the fire and pent up energy within the Nissan camp as they prepared for the annual meet with their nemesis. Coming off a commanding win in the previous round at Sepang, the Hasemi Motorsport duo of Ronnie Quintarelli and Hironobu Yasuda were on a roll right away, and ended up snatching pole position. This despite the winner's handicap weight they had on the car. Maybe it was finally Nissan's time to score at the Sendai area track…

…and that's exactly what it proved to be, though not in the hands of the pole-sitters from Hasemi. Instead, Benoit Treluyer and Satoshi Motoyama muscled their way from from fourth on the grid to the front, edging out the Eneos SC430 which had led the majority of the race. It was an historic day for Nissan.

Amidst all the craziness and heat of qualifying, it's easy to forget how picturesque the track is.

The track itself is great! Rather compact in its design and length
(3.704kms – 2.3 miles/lap), it provides fantastic visibility for the
fans, who, from the main grandstand (just to the left of the 1st corner
on the map above) can see the next three turns and when the cars pop
back up at the S Curve. Brilliant. Further around the lap (the wooded
section) through Hi-Point, Rainbow and Horseback is the quickest part of
the track, before emerging in front of more grandstands just prior to
110R Corner and the sweeper that takes cars back up hill and under the
Dunlop bridge for the start of the lap. (Thanks Wikipedia for the map
image)

Sunday morning warm-up and the fans are out in force. You can just about make out the Dunlop bridge in the background.

…and yet just two hours later it was like this! Nicely coordinated fans, eh! Now that's what I call dedication!

The race started in the dry, but within about 30 minutes, looked like this. The Eneos SC430 looked for most of the afternoon to be on the way to an upset victory, only for its deep-cut rain tyres to fall away in the final fifteen tours of the 81-lap event.  The Lexus ended up fifth.

Another car absolutely flying (but who would go largely unrewarded, finishing 7th) was the TOM'S SC430 of Lotterer and Wakisaka.

But the car/driver pairing that deserves the outright MVP award for the weekend has to be the DENSO DUNLOP SARD SC430 of Andre Couto and Kohei Hirate. After a scintillating qualifying performance that put them 6th on the grid, the pairing were sublime in the race, Couto climbing to 3rd before handing over to Hirate, who went on to cross the line just 21 seconds behind the winners.

Finishing in 3rd place were the 2008 winners of the race, Kogure and Michigami. This entry is now the silver Weider-backed HSV of Duval/Kogure – surely a pair to watch this time around.

The Amemiya guys had a terrible weekend, starting and finishing in eleventh place.

While the #74 Corolla AXIO didn't do too badly on its first visit to SUGO, claiming 8th in GT300. The sister machine came in tenth.

SUGO will feature a full complement of GT300 machinery, that's five more cars than went to Sepang last month. Four of these are Porsche 911 GT3 RS entries, two from Taisan, the Goodsmile Racing entry, and this year's spot performer, the #25 Samurai team Tsuchiya car, last seen at Fuji in May. The other car we're welcoming back is of course the R&D Sport-run Subaru Legacy B4 GT300.

A shout has to go out to the JLOC, as SUGO hasn't been the kindest track to these guys. In 2005, driver Wada Q nearly became a burn victim when his Murcielago RG-1 burned to a crisp, right beneath the Dunlop bridge. An eerily similar incident befell the team in 2007, when in the Sunday morning warm-up session, another Murcielago chassis caught fire. IN 2009, their sole Murcie qualified a respectable 8th, though fell to 13th by the flag.

Another car that could be quick (but fell from 3rd to 9th last year) is the ARTA Garaiya. Definitely loves the twisty bits.

So "Expect the Unexpected" – that's the catch phrase I'd use for SUGO; there's always something interesting happening, but it's never easy to see who'll end up on top until the very end. Bring it on (but hold the rain).

The Legends Of Nismo At Fuji Speedway 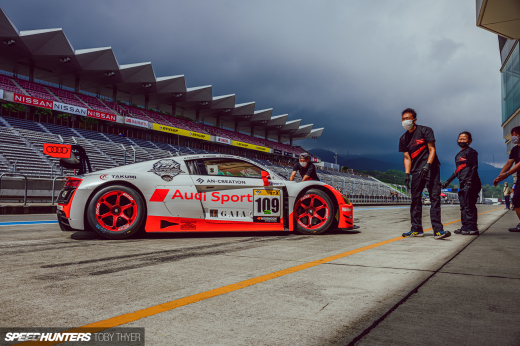 Nice Pictures of those japanese cars !i wonder if there is any channel or website that broadcast Super GT event live?

The Goodsmile Racing has changed to 997 GT3R already, not using 996 GT3RS

Enjoying these SuperGT posts. Not much coverage of this outside of Japan, so makes Speedhunters a bit more special

Love those little horizontal blue LED fog-lights on the Honda in the 14th pic!

is there any livestream ? nice pictures !