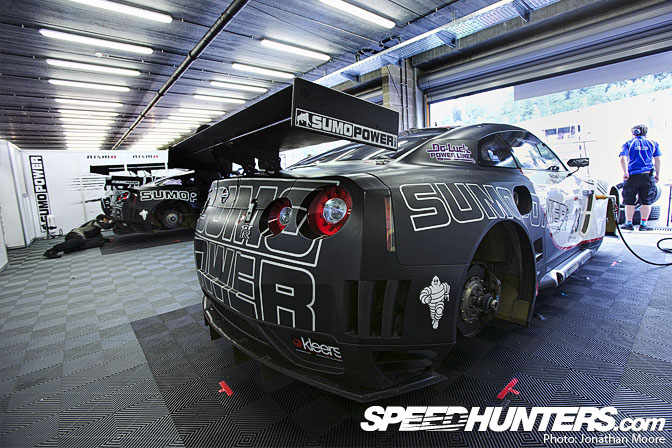 Sumo Power's recent test at Spa in Belgium looked like setting them in good stead for the fifth round of the World GT1 Championship at the same track – there had been a group test for cars competing in the 24 Hours that was open to GT1 teams, and Sumo jumped at the chance of getting some early practice in. Times were good: drivers were confident, the car was well balanced and things were looking good despite the 50kg of success ballast on the #23 Nissan GT-R of Michael Krumm and Peter Dumbreck. Was another set of podiums on the cards? 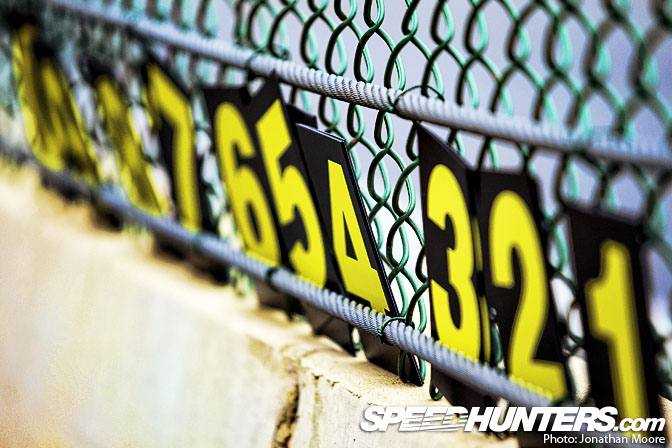 On the second day of on-track action at Spa, numbers meant everything. GT1 qualifying in the morning would whittle down 24 cars to the the fastest 8 in the battle for pole. This would then be followed by the Qualifying Race in the afternoon; although only the top three score it in turn set the grid for the all-important, full points-paying Championship race at lunchtime on the Saturday, just hours before the Spa 24 Hours would kick off. 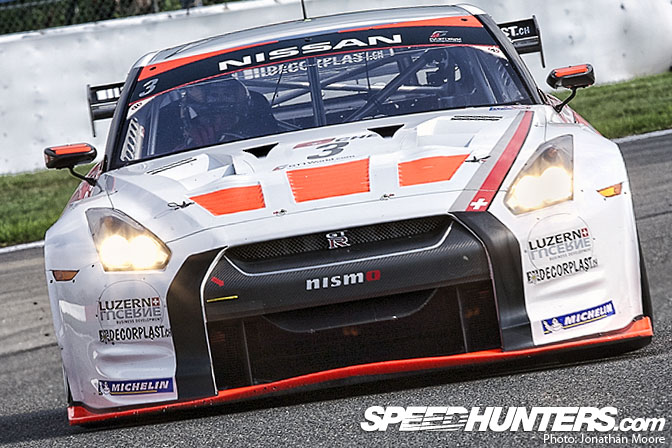 The Swiss Racing Team had got one of their Nissan GT-Rs  ahead of the Sumo Power sister cars in practice: #4 with Seiji Ara and Max Nilsson scoring second quickest overall in the slippery Free Practice session, although #3 driven by GT veteran Karl Wendlinger paired with Henri Moser was a little way back. But where were the Sumo pair? The team were taking a steady approach in the wet conditions and building towards qualifying, managing just 20th and 21st in the 80-minute Pre-qualifying session – and the SRT cars were similarly towards the wrong end of the pack. 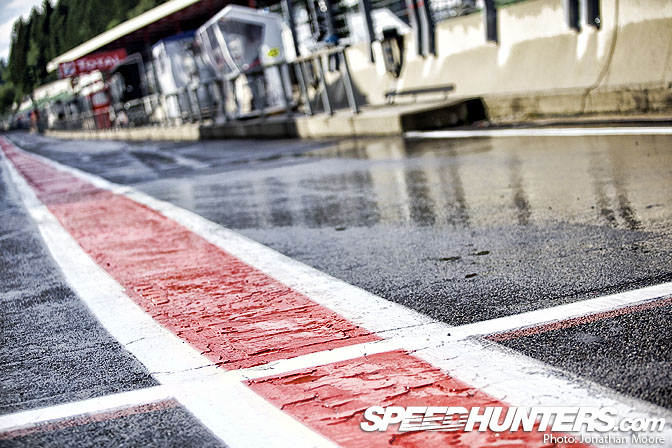 The previous evening, it had looked like we'd be in for more of the same wet weather and I was sure I'd be swaddled in plastic for three days. This is a shot from the bottom of the old endurance pit-lane, which runs down the hill after the first turn at La Source. The GT1 cars exit their separate pit-lane at the top, just after the exit of La Source, but during the 24 Hours cars have to run the complete length of *both* pit-lanes, only rejoining the track after the Raidillon corner at the top of Eau Rouge! The inordinate length of time it takes means pits stops are even more crucial for the 24. 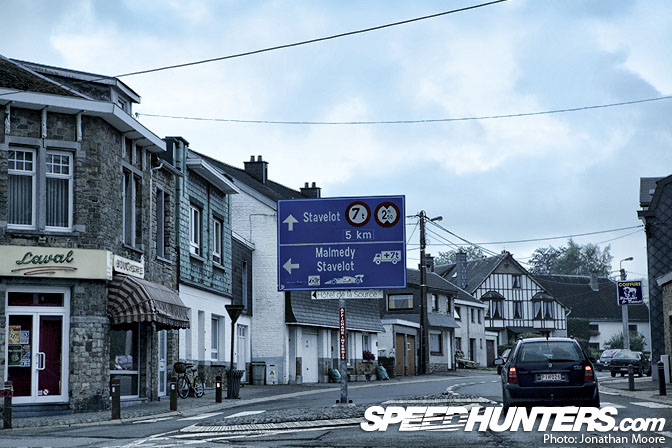 The local Liege area is intensely proud of the race: most of Spa's corners are named after nearby villages, and references to the track are everywhere – from the obvious road-signs to the local hotels: the Racing Hotel, Pitlane Lodge and so. Even the local smart Radisson has a glass display case full of memorabilia from the classic sportscar and F1 races at the track, and the bar menu used a graphic of the track on its cover! 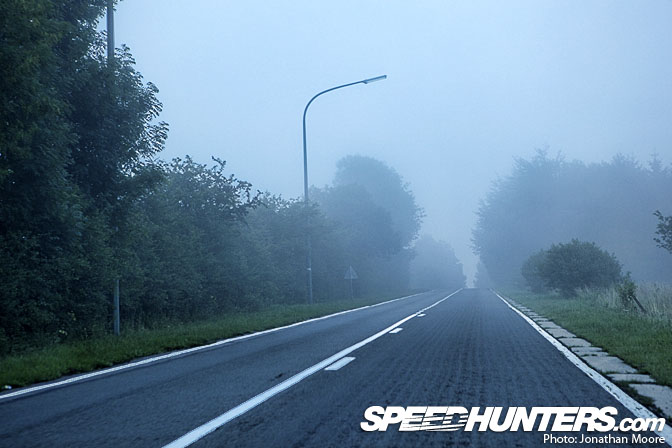 Friday morning had dawned cold and misty… Driving to the track through the ghostly landscape, I wasn't optimistic, and zipped my jacket up extra tight. 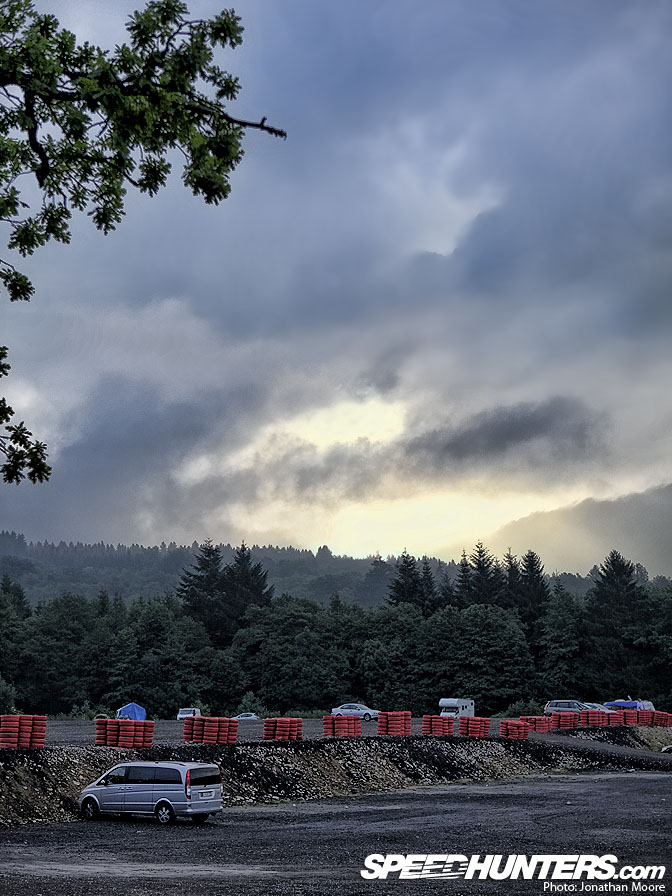 As we parked our hire car the clouds were still battling the rising sun for control as to who would be boss. 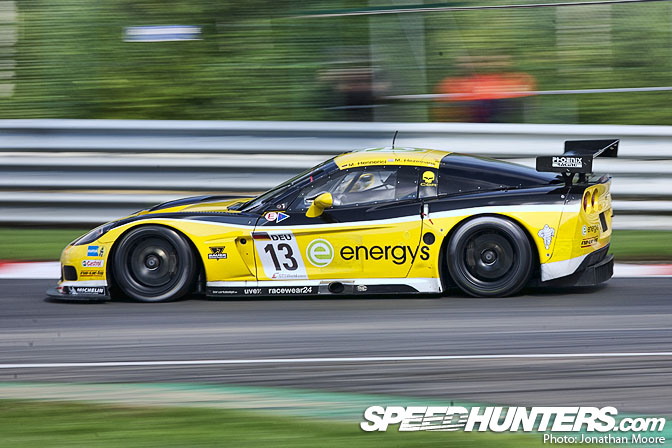 But when the sun triumphed and gradually burned away the morning mist the track completely changed character. Kerbs gleamed, the trees shone with a lush green tone and the cars glinted in the sun. And yes. It was too hot! I think this is a problem with being English: no matter what the weather we're never happy… Luckily the sun only lasted a couple of hours. 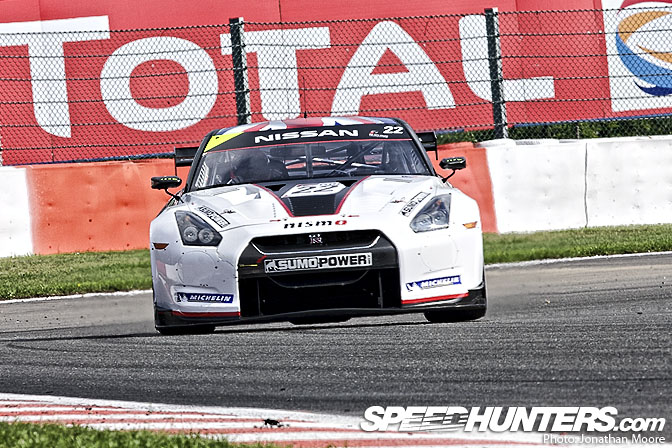 Qualifying kicked off with the first knockout session, which would lead to the slowest eight cars being eliminated. The initial runs looked promising for Sumo Power, with respectable lap times posted… 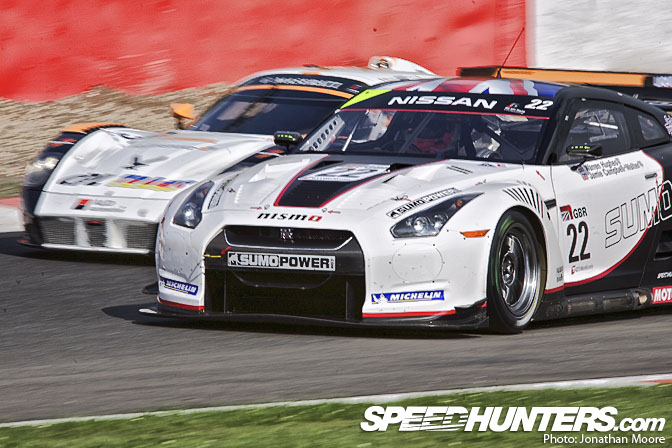 …but then it all went wrong. As the first session ended and the second started, there was no sign of #22 or #23! Back in the pits, jaws were on the floor. What had happened? Bad timing seemed to be the culprit: #22 took on new tyres for its second run but didn't get enough heat into them in the little time that was left; #23 had risked doing a single run to save a set of tyres but as the times for the other cars started dropping they realised they would have to put another hot lap in. With almost the full 24 cars out on track  trying to improve, traffic killed Sumo's chances of recovering the situation… #23 ended up 19th on a 2:19.720s, with #22 just 25 hundredths of a second behind. Disaster. 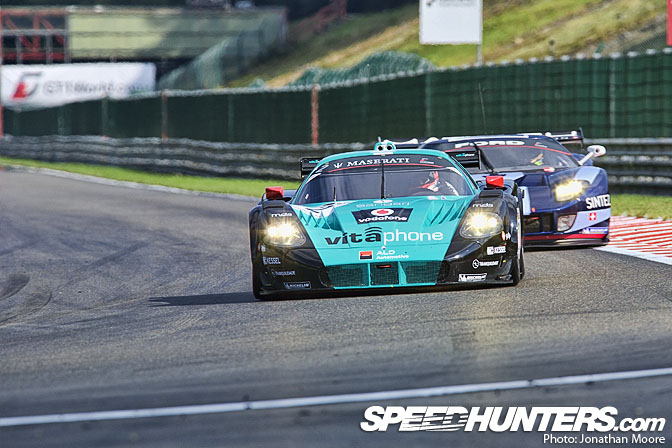 It wasn't just Sumo Power in trouble. The dominant, championship-leading #1 Vitaphone Maserati MC12 was also mired at the back in 21st place, another victim of the heavy success ballast. Instead it was #2 that got through to the second session and headed up the Vitaphone challenge. 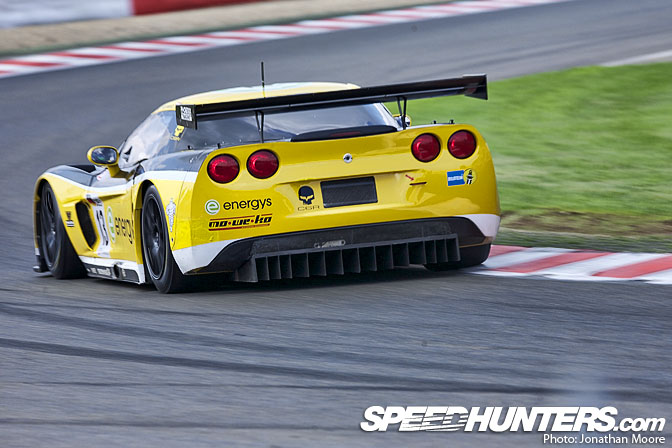 It was good news for Phoenix/Carsport: after the fire that burned out one of their C6.Rs at Silverstone they finally managed to source a replacement chassis and were back up to being a two-car team again. Both cars got through to Q2; #13 ended up an encouraging 5th and #14 in an appropriate 14th. 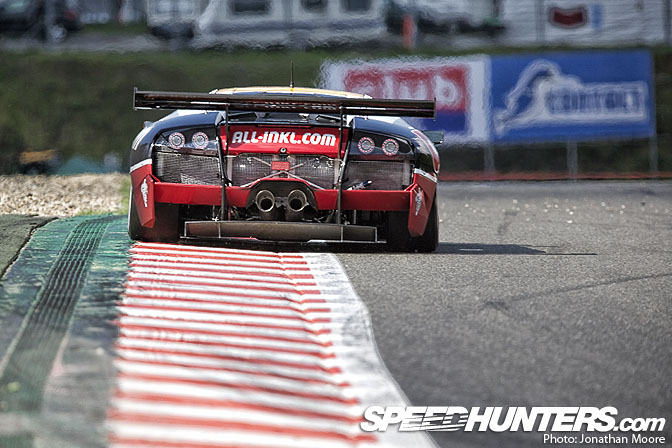 The Lamborghinis seemed very much at home here, the long straights allowing their screaming V12s to be on full song. However, both the Reiter and All-Inkl teams only got one each of their two pairs of cars into the final 10-minute fight for pole: All-Inkl's #38 Murcielago lined up in a season-best second and Reiter's #25 just behind in third 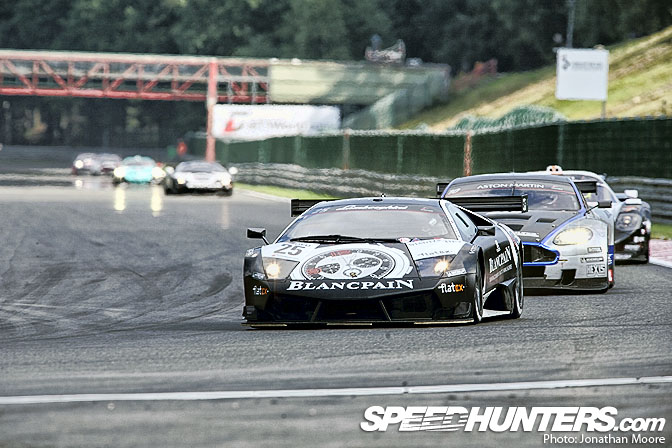 Taming that V12 isn't that easy though, especially on a greasy track. At the top of the Kemmel straight is the right-left flick of Les Combes – scene of many a braking mistake. 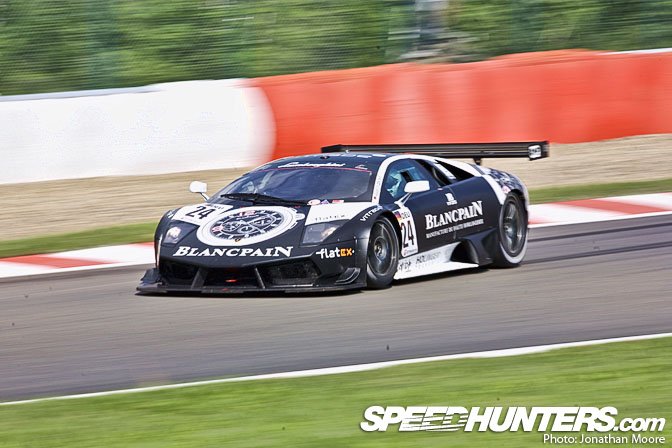 The entry is relatively fast, but then the following tight left makes life difficult. Brake and turn  when you're not in a straight line and you'll be fighting your way all through the sequence of corners. Nice black lines being laid down here though, I thought. It would explain why #24 was back down in ninth though. 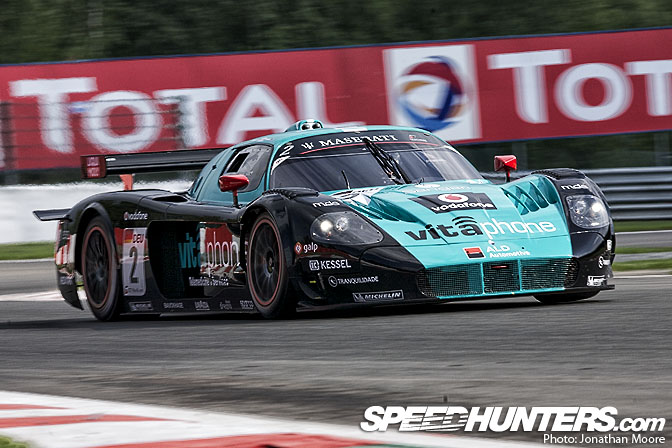 The Maseratis obviously have very reflective rims: I was trying to work out what they'd done to their wheels when I was downloading these shots, before realising it's just the reflection of the kerbs! Nice red-walls… 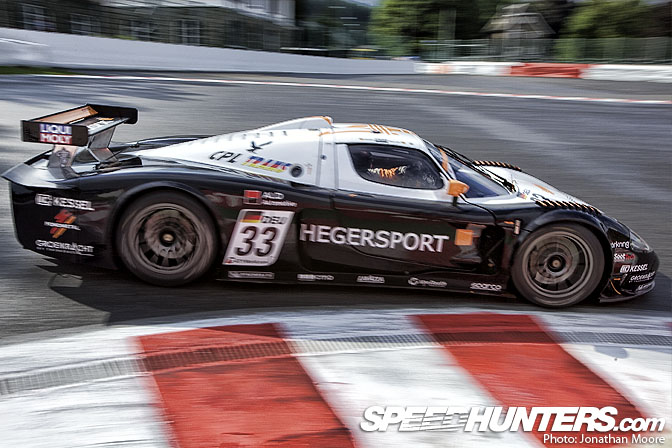 You'd normally expect team cars to be on a similar pace, but it does show what a difference ballast can make in such a tight field. The #33 car had finished on the podium at Paul Ricard but was now dead last, whereas its sister car, #34, was up in fourth place only 7/10s of a second of pole. Fortunes would change for this car, however… 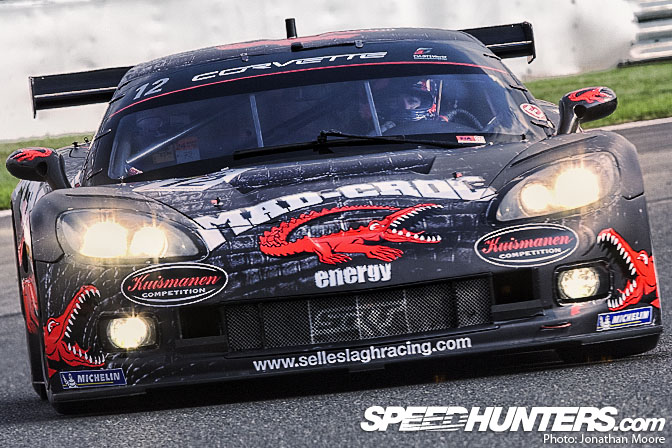 Another team where the cars are at opposite ends of the grid were Mad Croc with their Corvettes: the #11 driven by the Dutch pairing of Xavier Maassen and Jox Menton grabbed pole by 2/10s from the Lamborghinis, with a  2:17.605s lap. #12, with Corvette star Oliver Gavin? 16th. 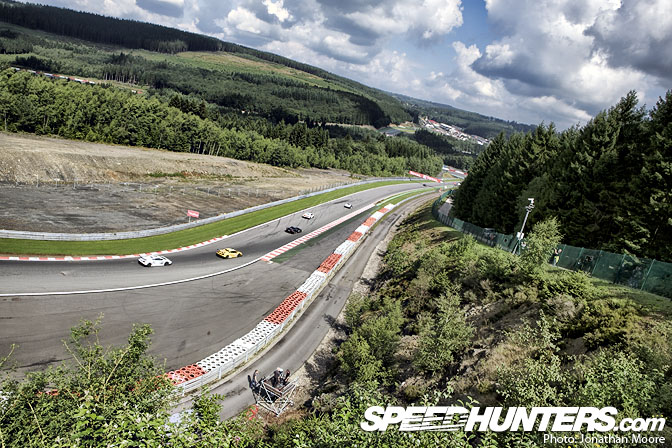 Spa is not a track you go for a short stroll round. It's an enormous place. Even in its current, 21-corner truncated form – reduced from 9 miles to 'just' 4.352 in 1979 – it's still monstrously long, as the GT1 lap times attest. The length and sprawling nature of Spa means that a photographer's job is not an easy one if you want to get a decent range of shots. For instance, this is a shot from the Corner That Has No Name, after Rivage and before Pouhon. In the very distance is the pit-lane. Just getting from there to here during an hour-long race is no mean feat, let alone actually then taking some pretty pictures. Media shuttles do operate around the perimeter track at Spa, but seem to be like London buses. None when you want one; loads when you don't. So often it's a case of saddling up and walking out on your own. 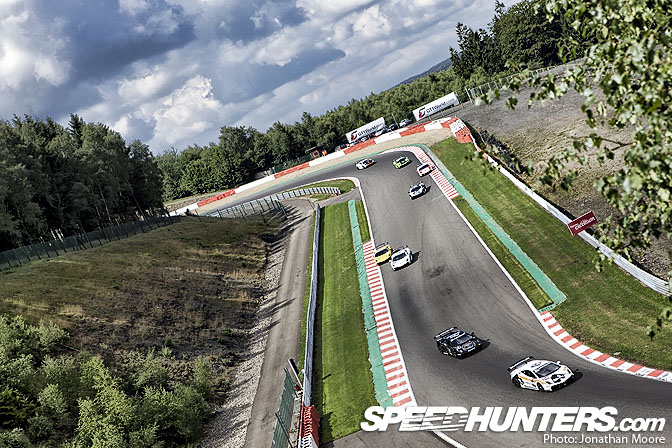 But walking right up to the top end of the track is a must. From Les Combes through Malmedy and Rivage the track squirms downhill to another balls-out corner, Pouhon (Spa doesn't lack for such corners, as you've guessed). Camper vans and tents were already lined up right up against the catch fencing after Malmedy, literally within a couple of yards of the track. At Le Mans, I always love the constant sound of racing engines – but in the near distance. For 24 hours, I think this would be a bit much even for me… 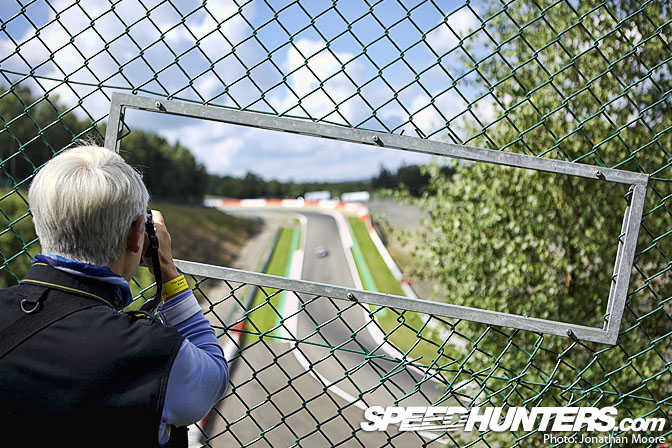 There are some great vantage points overlooking the track – and even better, a lot of them are in spectator areas rather than locked up for those with the right passes. There are even snappers' holes cut in the fence, allowing the fans to get as good a shots as anyone. 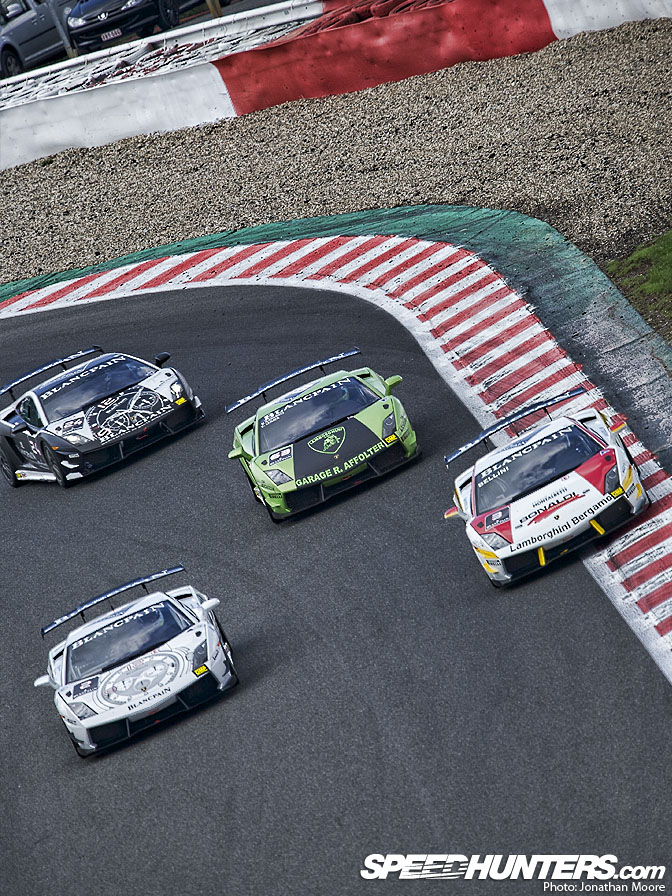 Rivage tightens to the right and then drops downhill. As my driving skills limit me to computer games (and even then, 'limited' doesn't begin to sum up my abilities) my experience of the Spa GP circuit made me think I knew the track. Forget it. No game can put across the violent levels of gradient and camber here. Except maybe Shift 2, should such a game be made?… 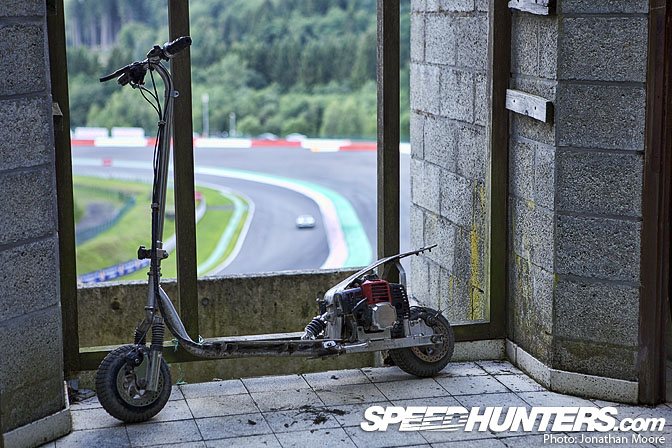 So, there I was, stuck out at the furthest possible extreme of the track. How to get home? Now, I think I'm a pretty law-abiding citizen, but when I saw this little motorised scooter propped up… Tempted. Some photographers can be seen precariously teetering their way around tracks on these things, zooms swaying. The smart ones scam proper scooters or even quad bikes from teams. I was thinking of a Speedhunters helicopter (Speedchopper? Helihunter?) to transport me round, but for some reason Rod nixed that idea. Will Roegge and I are still planning a Speedhunters Zeppelin though, so watch this space. 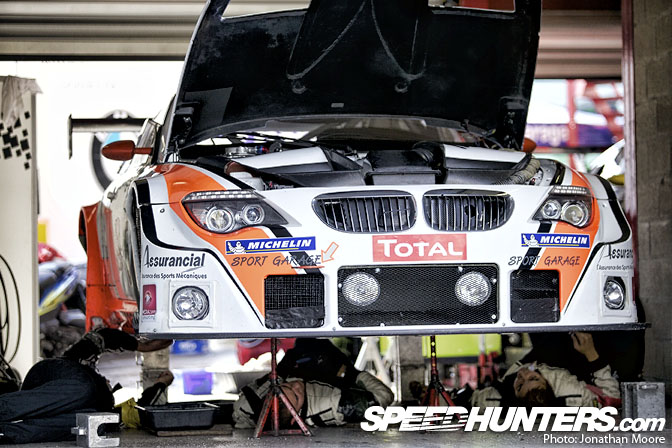 After walking all the way back, I found work continuing on cars tackling the 24 Hours in in the cramped endurance garages, despite (because of?) them having no track time that day. Literally the guys working on this BMW Alpina can touch the walls either side of their garage. 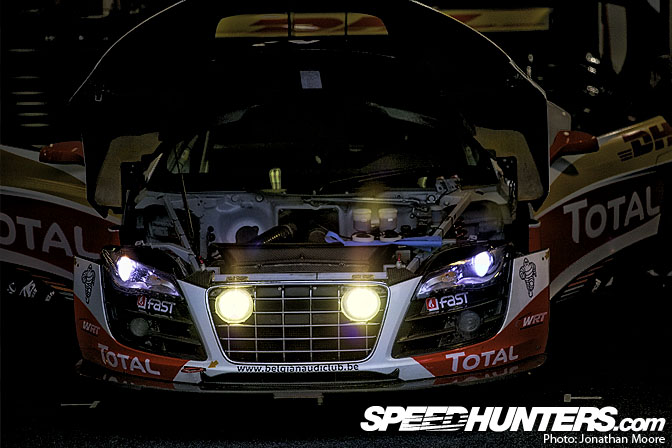 Whereas up in the F1 pit-lane were the Chosen Ones: the factory teams with the expected uber-professional set-ups from the likes of Audi, Porsche, Ferrari and BMW. 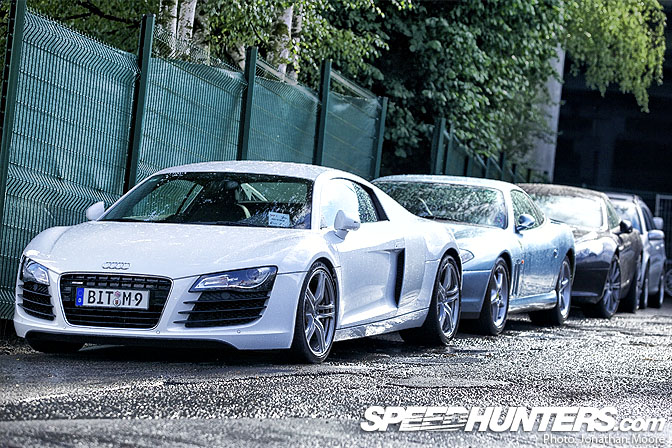 As the day passed, more and more supercars started appearing: initially there was a scattering in parking areas… 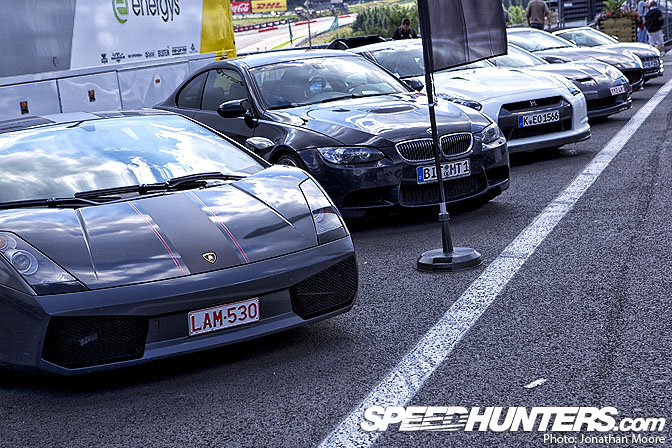 But then the official show cars started lining up. Outside the GT1 offices was this line-up representing the current manufacturers – with one obvious addition. Although BMW are only officially in GT2 and GT3, there are strong rumours that the team running the GT3 Alpina are planning to step up to GT1 in 2011. 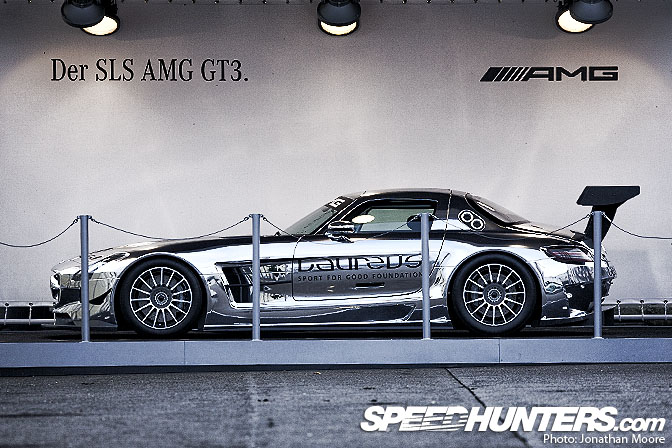 A new team coming into GT3 next year is Mercedes, with the stunning SLS. There's already a big push behind the team, as you'd expect from a manufacturer. The car is going to look stunning on track. 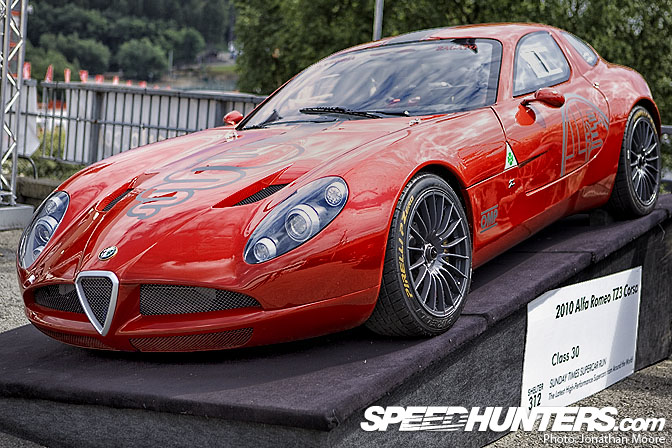 However, I saved the best till last. No, really! Okay, I heart Alfas, but along with the 8C this Zagato bodied T23 Corsa is a work of art: truly a worthy way to celebrate Alfa's centenary year. I want one for Christmas. Rod, how about if I drop the Zeppelin idea?…

It wasn't that long ago that the catch fences weren't even there.