I often tell people that Speedhunters is designed for the modern attention deficit mindset. You don’t really need to read anything on the site to get a sense of our stories. Just visit the site every day, scroll down, look at some cool cars and you’re done. There is depth for those who want it, but it’s not a requirement to get something from the site.

At the same time, most of the Speedhunters team members themselves have rather short attention spans too and we feel the need to mix things up sometimes on the site. Why keep doing the same thing month in and month out? Who says we need to? I certainly don’t.

So for June we are going to mix things up a bit and change the focus of our stories yet again.

The last two months have seen a record amount of events coverage on the site, as we’ve sought to bring you stories from every corner of the globe.

But at the same time you may have noticed that we haven’t really featured that many cars in the past two months.

Well for June all of that is going to change. We’ve decided to christen June “Spotlight Month”.

The plan: flood the site with as many quick Car Spotlight features as possible.

As you can imagine, we see a lot of cool cars in our travels, but arranging a proper, professional quality feature shoot takes up a lot of effort and time. There are only so many of these that we can shoot each month.

Spotlights on the other hand are quick and dirty and don’t take a lot of time.

So we hope to showcase a huge variety of different cars, from racing machines to street cars to hot rods. June on Speedhunters will feature a massive range of machines from all sides of the culture.

In terms of events, we’ll be starting things out with coverage from Formula D New Jersey.

Last year, Team Falken had a clean sweep of the podium. We’ll see if they can repeat this! We’ll also try and shoot some spotlights with the various new FD machines.

This same weekend Dino Dalle Carbonare is going to be covering D1GP at Fuji Speedway.

Which coverage is more important for you to see now? D1GP or Formula D?

… but I’m sure that Allan McNish and the Audi crew will be gunning to take back the crown. We’ll be running daily reports from La Sarthe to bring you to the center of the action.

Meanwhile our new Japanese based Speedhunter Len Clarke will be in Malaysia to shoot Super GT for us.

Here’s a start shot from last year’s race to wet your appetite.

Jonathan Moore had to do some wet weather shooting in the at Brno the other weekend, but he’ll be off shooting at the GT3 European Championship at Jarama Circuit in Spain this month. I’m sure sun will be blazing! Remember to bring sunscreen m8!

We’ll also be bringing you coverage of the British Drift Championship round three from Lydden Hill care of Ross I’Anson.

If that’s not enough drift action for you, Dino will be back out at the end of the month for D1GP Okayama. It’s just so good it hurts!

And finally Paddy McGrath will be showing up at Brands Hatch at the end of the month to shoot Time Attack round three. Here’s a picture of last year’s winner.

Somewhere in there we’ll be covering off the Idler’s Games straight from Tsukuba Circuit care of Dino.

I’m sure it will be paining Mike Garrett not to be there as this was his old haunting ground.

As for me? Well I’ll be busy working on my other Need for Speed job this month so will have to skip out on shooting for Speedhunters… I do have a rather interesting announcement to make very soon though regarding a new Speedhunters project though… See the above image…

The Other Side Of Idlers 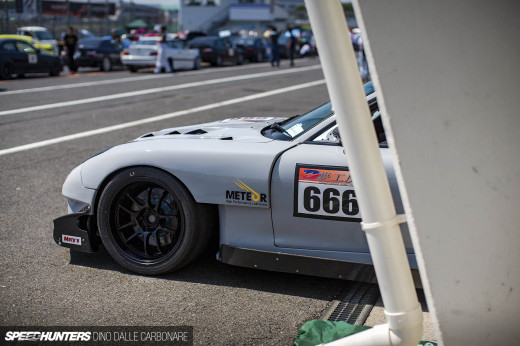 The Rotary Power Of Idlers

Rod, I really hope you guys dont give us another 'Shift'. I dont rememeber the last time I was so disappointed in a game!! I drooled on every screen shot put up on here, then when I finally got the game... HUGE let-down. Glitches everywhere, cars that didnt work, yacht-like racing physics, limited customization although we were promised maximum... Dont even get me going on the so-called "drifting". I could go on, but I wont. You guys did a fantastic job on the graphics, and the sounds were amazing. But this is a game, not a movie!! If this new game isnt a mix of Underground 2 and Shift, this will not be my last gripe!!

I think the project he means is another Build...

For the first pic you put Speedhunters.com in the perfect spot!

Does anyone know what wheels are on that white S13 coupe?

Just found this clip on you tube ,

Check out the marshall fall off the wall and land on the bonnet of the Rx7 .

i think it's time for Need for Speed to split: one side staying with the lovable arcade physics (Underground 3 perhaps?) and the other entering the racing simulator arena. and by simulator i dont mean NFS:Shift. i mean a real simulator like Forza or GranTurismo. now THAT would earn a lot of respect. as far as im concerned, Underground 2 was the last great Need for Speed. it would be nice to have reason to be a fan of the franchise again.

DO BOTH D1GP AND FORMULA DRIFT. AND DO A SPOTLIGHT ON TANNER FAUSTS CAR

Last pic must be from NFS World.

# DRFT Monkeh - that is what Shift and World are bro. One is trying to be hardcore, the other is total arcade. Honestly, NFS has gone downhill since NFSU2, i totally agree. Shift has some good moments, but too many things that make you never want to play it again. I will say it was a good try. But honestly, steal the code from Codemasters for your drifting. It's arcade too, but at least its playable, and I can drift Mt. Haruna multiplayer on it. NFS, you were so close with NFSU2, then you KILLED drifting in your games!

Those are Rays Gram Lights 57S in white. I had the same rims with a little less offset on my S14 a couple years back!

D1GP. Because I can't make it to any of the events this year

More D1GP coverage please! FD too but I dont have to ask for that.

@max Next 2 NFS games will be: purely online street racing with open city tracks and single player game from creators of "Burnout". None of them is even trying to look like it's simulator, so don't get your hopes up)) BTW, judjing by the quality of graphics from this screenshot, it's most certainly from that MMO game.

Isn't NFS World coming out or something? Sounds like a killer month!

spotlights are my favourite part of speedhunters.. lookin forward to the rest of this month

shift DLC? i think the last pic is from the need for speed world beta i think, not shift

Hi Max. I think everyone involved with Shift took the feedback that the Speedhunters audience gave to the project VERY SERIOUSLY. You'll see that we have taken a lot of what was said on board and more.

This new project is not part of that game lineage though.... We can discuss more about this soon though in a separate post.

please don't do quick features. they dont tell u much about the car. give us super in-depth features !

Really appreciate the Speedhunters crew will be in Malaysia for the Super GT this month. Looking forward to meet this guy & get some speedhunters stikcer

I'm really looking forward to Dino's coverage of the Idler's Games, as well as the wonderfull pics that will inevitably be taken at LeMans (My money's on Audi for a comback). Is there any chance that we'll be getting any coverage of this months DTM race as well? Either way, it'll be a great month

OMG, pass the tissues, That Black Zenki is pure sex on wheels!

I totally agree with DRFTmonkeh and Dirge.exe. i have both NFS Shift and NFSU2 and after playing shift for a while, the novelty wore off and i went back to playing U2 because its way more fun not frustrating like shift is. (customization levels SUCK!)

Rod, why don't you guys do a feature or a series of articles on the developments in motorsport safety over the years?

I agree with max and DRFTmonkeh!

NFS Underground 2 was the best NFS by miles!

The hallmark of NFS U2 was its uniqueness to extensively customize cars.

We need race wars in cities and not a racing simulator that takes place in tracks.

There is a wide range of games that do so.

I would also like to be able to adjust the ride hide of the cars and use real bodykits.

But thats just me...

Please let us know about the new project asap...

oew that mk1 scirocco is pretty...Should be a good month!

Wow, surprised by the comments. I greatly prefer formal D. Something i can actively participate in the USA.

I'm going to be at Le Mans. Maybe I'll run into you guys.

What is car #36 in the second to last picture??

@dianab that is a Suzuki Cappuccino

Rod, I really appreciate the personal feedback. you guys do a great job on this site, which is why i come here often. I just wish the games reflected the dedication and effort everyone see's you guys put in here. Thats why im looking forward to the new game, whatever direction it takes.

What about features on Moto GP or WSBK? I know I haven't seen any motorcycles on here. If you're truly hunting for speed, I know you can't go wrong there.

All pic are really great, but...

the pics from 2009's Idlers Games really brought me back to the original Speedhunters days when Mike still covered anything and everything that was going on at Tsukuba, i mean that was the whole reason i even started following this site! Hard to think that it was just over a year ago that he came back to North America..

Also i CANNOT wait for Le Mans! this year promises to be exciting and i'm going to have to try to stream it on my phone while i'm at work or something lol