For the second round of the JDM Allstars series, the circus arrived at Donington Park. Now if you have been watching the news surrounding Donington, you'll know the circuit is virtually unusable after a failed attempt to host British F1 GP. However, using the "under reconstruction" Donington track for a round of JDM Allstars would be far too straight forward. So the event was held on the little known and truly awesome Old Melbourne loop.

Not used for competition since 1938, the Melbourne Loop is now used as a link road that serves a Sunday market. Even though this mundane purpose shows none of its former glory the track is still intact. And this provided a perfect venue for the second round of the JDM Allstars series.

Turn 1 was A fast left hand flick over the Melbourne rise… And then a plunge into fast sweeping tree-lined turns 2 and 3.. 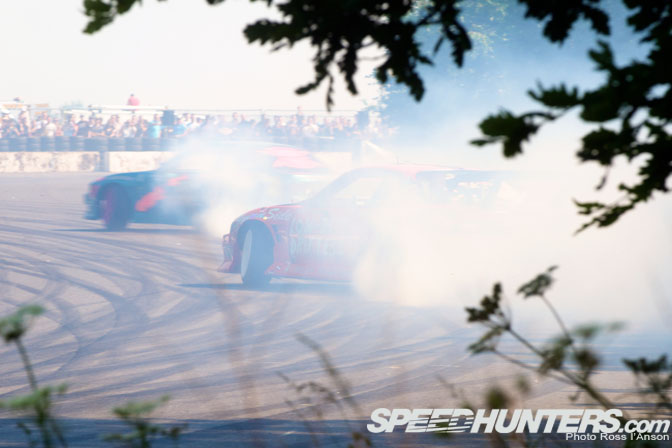 Through to a long right hand hairpin to finish the course..

The unique nature of the track and the total lack of run-off, made shooting conditions more akin to wildlife photography than event coverage -as demonstrated by Paddy McGrath.

It didn't take long for the sleeping track to come back to life. Though not with the thundering sound of Auto Unions and Silver Arrows, but screaming SR20s and 2JZs.

Making the long trip over from Poland, Pawel Trela and Maciej Bochenek were impressive from the start. Huge angle and speed through the whole track instantly identified them as forces to be reckoned with.

Matt 'Mitto' Steele made his return to competition in a freshly built and very trick S14.

As qualifying started the track started taking its toll on a few drivers. Round 1 winner Jon Calvert was suffered a very heavy impact at the hairpin. Although the damage doesn't look too bad in this photo…

… A look at the other side of the car reviles the extent of the damage.

George Tilling put in a superb performance in a underpowered car to qualify 13th.

Luke Fink put in a shrubbery clipping run to get 2nd spot..

But it was JDM rookie Marciej Bochenek that took the top qualifying spot with 90 point run.

First up in the top 16, Bochenek beat Tom Yates.

Trela beat Esperanga to get through to the next round..

Mitto span and hit the wall, Phil Morrison progressed through to the top 8.

Steve Will won against Alan McCord.

I'm not entirely sure what happened to Luke Fink on his warm up run against Brad McQueen. He appeared at the hairpin with his car looking distinctly second hand.

In the tandem run, Fink aggressively went for the over-take on McQueen making contact. The battle went OMT.

Fink then put in a awesome run, taking the win.

In the last battle of the top 16, Vince Noott span against Ben Broke-Smith and Ben took the final top 8 place.

Into the Top 8 and a quick 'Ray Mears' moment for me hacking through the bushes to get back to the Melbourne Rise. Chapman met Trela with Chapman progressing through to the semi finals.

A small engine fire put a end to Robin Neeson's day and Bochenek got a place in the semis.

Phil Morrison won against Steve Will…

… As did Luke Fink against Bon.

In the Semi finals Dan Chapman, won against Bochenek.

…With Phil narrowly taking the win in the re-run…

…Leaving Fink to fight it out for 3rd place with Bochenek. Fink took the win.

So we had an all Team Driftworks final..

Judged 5-5 on the first run it looked like it would have to run OMT. but with Chapman taking a slight advantage on the second run he took the overall win.

So  the final standings were Dan Chapman 1st, Phil Morrison 2nd and Luke Fink 3rd. Thus ends a superb JDM Allstars round from a truly unique track. Paddy will be along soon with some more action from Donington and the next round of JDM Allstars is next week from Newcastle.

"I'm not entirely sure what happened to Luke Fink on his warm up run against Brad McQueen. He appeared at the hairpin with his car looking distinctly second hand."

He hit the inside tirewall at turn 1 in warm up at full speed.

awesome round!! congrats for Dan Phil and Luke!!!! But i'm so impressed by polish drivers. I'm from Poland and that what they doing on polish tracks is almost impossible. I had some worries about Pawel and Maciek in JDM allstars but they did well Maciek 4th and Pawel 5th. I can't wait for some podium places with polish faces. Come on guys!!!!

How about some info about the track too since its a historic track.

oh my god what a day

the sheer speed these guys throught the coure was crazy, dan chapman is now the man to beat in europe

Polish guys where amazing, cant wait to seem more of them, brilliant drive

hey fink, you left your broken chairs and caramel on the counter at ya old house in melb...

"fixed the handbrake and still got 3rd place... the track was seriously amazing....."

That's all about the Poland. Good but lucky 4th place, and here we have a lot of assholes, who make huge mess. Go to the hell.

A great event that really promoted a camaraderie that is becoming an industry standard amongst the top drivers in Europe. Many of the battles, especially those between Dan and Trela, looked to be just as much fun to drive as they were to watch. Thanks Ross for the write up and the awesome pictures as usual!

What an awesome day, So proud of my baby!!!!!! Really looking forward to this weekend round 3. Good luck everyone, but im with LUKE to take 1st place, he deserves it this time..

Awesome! congrats to all the guys that got results,that old track looks quick for sure!

why hate ? they did a grat job in representing Poland, what else do you want ?

wow, looks like a really great track and venue.. really love those special places, as normal tracks have become a bit boring and too unspectacular for spectators

Where were the Dutch guys??

yeah theres still lots of amazing guys out there James Deane in Ireland,Fredric Asbo, Remmo Niezen,Paul Vlassbom of current top european drivers but from watching dan compared to last year when he beat all those he is on another level now

we will all have to wait till wembley maybe if they all do battle...

Shame the field of drivers doesn't live up to the hype, 2 Polish, 1 Aussy, 1 Irish and a Portuguese driver living in the UK - HELLO .....? Not the best drivers in Europe is it????

What happened to the 60 drivers from 11 different countries as promised at the start of the season?

Certainly not setting any standards as claimed above...

Shame only a fraction of the track was visible for the spectators, no seating, no big screen as promised....

lol was very cool event, fast track, awesome driving by the guys there !!

but i am in no way the guy to beat in europe!!! im just a dude from the uk keeping my shit fun and pushing hard as i can!!! but the last few events of the yr WILL have the best in europe there and i will have have fun with them smoking some tyres and having some laughs!!! peace