On my way to San Diego for the Subaru meet on Saturday, I'd be passing right through Irvine in the morning – meaning there was no reason not to stop by Cars & Coffee for a bit.

It's a bit like SoCal's version of the Daikoku Futo in Japan. You never know exactly what you're going to find, but you know it's going to be good.

By the time I rolled up a lot of the cars had already left, but there
was still plenty to see. There was big showing of Nissans, such as this Hakosuka.

As well as this Kenmeri, which was pulling out just as I arrived.

Some slightly newer Nissans were out as well. This is one of the coolest R35 street cars I've seen yet.

It wouldn't be Cars & Coffee without a good showing by the BMW guys.

And parked just across the way, this immaculate Mustang fastback.

Alfa Romeo SZ, a rare machine in any part of the world. Personally, I can only recall seeing them in video games…

A '69 Camaro looking just about perfect on a set of eight-spokes from Vintage Wheel Works.

There are always Ferraris at Cars & Coffee, whether they are classics that look straight out of Pebble Beach…

…or newer, but just as iconic models like the Testarossa. You can almost feel the presence of Don Johnson.

C2 and C3 'Vettes parked side by side.

I don't know if its possible to choose a better wheel for the Lotus Esprit than the OZ Futura. Mmmmm…Just look at that.

These gents are staying classy in their drop-top Continental Mark III.

I am not worthy.

Ah yes. just another great morning under the June Gloom in Orange County. 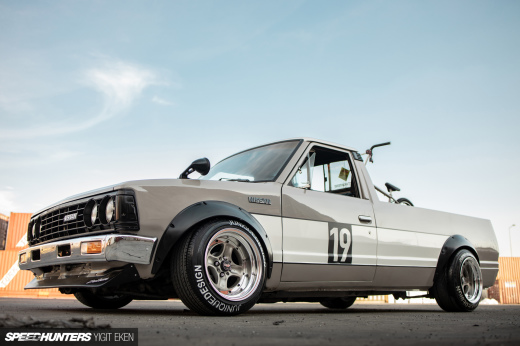 a GTR and a GTO side by side! thats not something you see everyday!

What about that TIME MACHINE, Mike????

I was there too saturday. What time did you roll through? The parking lot looks a little empty.

I just bought newest Top Gear Polish Edition magazine I saw a funny note about Alfa ZS "Alfa Romeo ZS was the first car designed on a computer,but it seems like the mouse must have been broken."

WAIT!! Whats the red vehicle next to the 3 BMW's?

what time does cars and coffee start, and what time (estimate) does it end? please and thank you!

I don't undergo if its doable to determine a alter revolve for the Lotus Esprit than the OZ Futura. Mmmmm...Right sensing at that.

Is that a grey delorian in the right next to that green pickup truck?!!! I THINK SO!!!

surely you have some shots of the DMC? These meets look great!

Thats a Firebird 400 next to the GTR not a GTO.

Wow that Hakosuka looks amazing, very jealous of you seeing that car.

Do I spy a delorean in the background of the last pic?

aw what time were u there?? i have been goin lately and put my crapped out s13.5 in the show. everyone looks at my missle like its a piece of shit. hahah only u guys would really understand. when do you think ull be there again??!

Old and new, all great.

TE37's would look great on that Esprit...

What a great collection of cars! Especially loving that Continental Mark III

ive only ever seen 2 Alfa SZs and one RZ, ugly but I love them

i love it. wish i was there.

love the early GT-R's they look great.. i saw a stock new GT-R last night but it wasn't as nicely turned out as this one in Grey, plus those LM's suit it better than the std issue rims.. one of those Alfa Romeo SZ's pulled passed by me on the way to Hull, i sidled passed him a few mins later and got thumbs up!! yes i love cars LOL.. nice write up on a cool looking event.. keep up the coverage!!

anymore pics of that Firebird?

As I mentioned in my post yesterday, last weekend's Cars & Coffee event had a large showing of old school Nissans. There were a few Skylines imported from Japan, a couple 240Z's, and a few Datsun 510's - one of which really caught my eye

The lotus Esprite V8, those wheels were the stock wheels for that car. Thats how awesome it really is

Love that DeTomaso Pantera in the background of the Hakosuka's shot.

lol @ the Camaro on RS Watanabes. haha jk but thats what they look like

lol @ the Camaro on RS Watanabes. haha jk but thats what they look like