The season's annual visit to Malaysia was a little less crowded this
time, with 27,500 fans in attendance on race day. In order to avoid some
of the midday heat, the 54-lap race began at 16:00. It was still over
34 degrees Celsius (95 F?) when the cars left the line for the 2-hour
event.

Sepang's searing heat did nothing to stop the GT-R juggernaut as two of the three examples qualified in the top three.

In the race's opening stages, the thorn in NISSAN's side came from the very rapid Honda HSV-010 GT of Ralph Firman.

…and though the factory NISMO GT-R dropped back in the early stages in order to conserve tyres, the car out front was never headed.

Satoshi Motoyama may have been running fifth, but his consistent pace meant everything was going according to plan.

Meanwhile, the car that took victory here in 2008 could start only eighth after electrical problems sidelined the car just as it began its Super Lap qualifying attempt.

Ones to watch: Consistency is key when gunning for championships, and the ENEOS SC430 has done that better than any other car so far this season.

A storming drive by Richard Lyons in the first half saw the ZENT SC430 move up in the early laps, but a drive-through penalty brought the car back down the order.

Loic Duval was another to really set the track alight early on, the Frenchman making an amazing comeback after being pushed into a spin on the opening lap.

Firman in the ARTA HSV ran 2nd until handing the car over to teammate Yuji Ide on lap 23.

Heavy after their victory at Fuji last time out, the MJ KRAFT SC430 had Kazuya Oshima at the wheel for the opening stint. The car started 12th.

Andre Couto was once again the starting driver in the DENSO SARD SC430.

…..while horrible misfortune hit the Nakajima Racing HSV of Ryo Michigami, the car lasting just a single lap before coming to a halt at the end of the pit straight.

Meanwhile Motoyama in the MOTUL-backed GT-R continued to run to plan.

But this is all the rest of the pack saw of the CALSONIC GT-R – if they could even keep the machine in their sights!

Soldiering on in the KONDO RACING GT-R, JP de Oliveira handed the car over to Hironobu Yasuda after 25 tours.

The Raybrig HSV ran particularly strong all afternoon, jumping up to 3rd after 15 laps, then briefly leading at the pit stop cycle. The car would eventually finish where it started, in fifth. 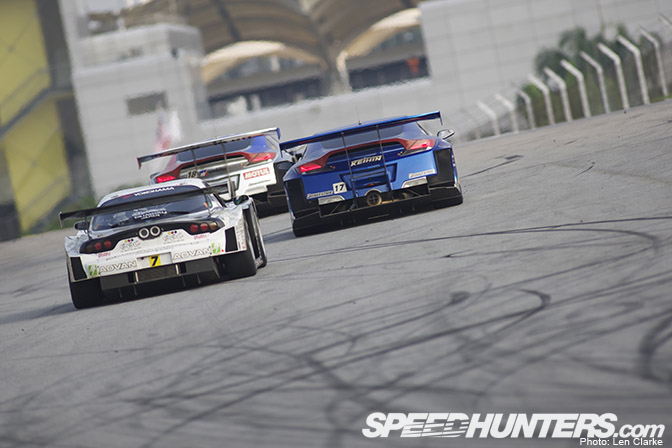 Another Honda that went well was the #17 REAL RACING example, though heartache for Kodai Tsukakoshi just three laps from the end when he was running third, taken out by a spinning GT300 machine.

As  the afternoon wore on, the sun began to set – though it was still scorching!

Traffic is always a feature of SUPER GT, and Sepang was no different. GT500 machines are constantly having to thread their way through the slower GT300 cars, which can make for some intense battles.

With Benoit Treluyer at the wheel, the #23 MOTUL AUTECH GT-R steadily moved closer to the front. Here's the car just a handful of laps from the finish,  settled in to 2nd place.

Evidence of the heat was everywhere. Just five laps from the end, Yuji Ide made an unscheduled dive into the pits, falling out of the car due to heat exhaustion, for Ralph to run the remaining laps. Having run so strongly all day, it was agonising for the team, who eventually finished just outside of the points in 11th, one lap in arrears of the leaders.

The Lyons/Tachikawa SC430 went on to finish 6th.

While the reigning champions Andre Lotterer and Juichi Wakisaka were eighth, handing the points' lead over to….

…these guys, Bjorn Wirdheim and Daisuke Ito in the ENEOS SC430.

Taking a pair of points for ninth was the result for the HIS ADVAN KONDO RACING GT-R of de Oliveira and Yasuda.

Despite being whacked from behind by the #100 (Raybrig) machine at two-thirds distance, Ronnie Quintarelli kept his cool (pardon the pun!) and took victory by over 13 seconds.

It was the Italian's second straight Sepang win, having taken victory in the #3 GT-R of Hasemi Motorsport in 2009.

Occupying the rest of the podium were Benoit Treluyer and Satoshi Motoyama from the #23 GT-R in second, and Round 2 winners Loic Duval and Takashi Kogure in third.

There's a short break (while the cars are shipped back to Japan) before the next round at Sportsland SUGO on July 25th.

Stay tuned for a run-down of the action from GT300.

Are these Races Televised anywhere? Online Maybe? I would love to watch this series.

Do you know what are those five things on the Lexxi roofs??

Yes Mr Zuffenhausen, they are used to direct air more efficiently to the drivers - installed in anticipation of the heat in Malaysia. Each of the five vanes is facing in a slightly different direction for maximum efficiency.

I have made a video clip if you guys wanna have a look... here is the link at youtube http://www.youtube.com/watch?v=TY6hN6FKHBc

I was Malaysian, but the non charged tv ain't broadcast this thing since before.. Fuck Malaysia Government!!

if F1 they'll broadcast it but this event...hurmmmm

if F1 they'll broadcast it but this event...hurmmmm

a good effort all-round, Super GT challenges the best of the best!! some excellent photo work too..