The cars finally took to the track at La Sarthe on Wednesday afternoon for their first practice session and it was immediately apparent Audi was up against it. Peugeot were quick, straight out of the box, where as Audi's appeared to struggle.

The first qualifying session got underway at 10pm. Despite the weather forecast, the track stayed dry. Peugeot continued there dominance with the French manufacturer locking out the first four places. Sebastien Bourdais was the quickest to take provisional pole from his team mates.

Audi followed the quartet of Peugeots with their three entries. Is this their true performance? Time will tell.

The Strakka HPD Honda was the quickest car in LMP2 with Johnny Kane at the wheel, just ahead of the almost identical Highcroft machine.

In the GT classes, the Young Driver DBR9 was the quickest in his relatively small GT1 class. Speedhunters will recognise this car from the FIA GT1 championship.

In GT2, Risi Competizione Ferrari set an impressive time in the hands of Gianmaria Bruni, ahead of the #63 Corvette. The battle between Corvette and Ferrari is set to continue into the race. BMW were a little disapointed with their results. Pundits were expecting great things, but the cars were #10th and #11th in class.

The race hasn't even started, but cars are already falling by the wayside. Marco Andretti had a few offs earlier in the day, so the car didn't go out at all in Qualifying.

Both Ford GT's had also crashed earlier, but got out for qualifying. 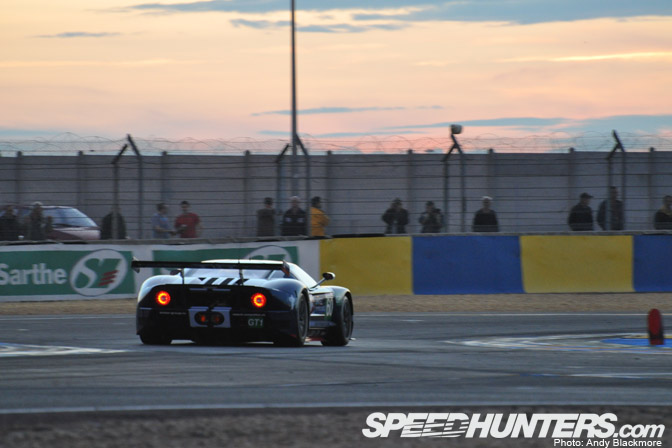 The session was stopped a couple of times after accidents. The most serious being the #96 AF Corse Ferrari which is probably terminal.

Uncertainty remains over the Jaguar entry. Endless problems with the car resulted in limited running. The ACO will need to advise if their rookie drivers have done enough to proceed into tonights qualifying.

Thursday Qualifying just started and will go onto midnight. So far its dry.

Andy or anyone else know if Risi Competizione are using the same chassis that brought the last two back to back LeMans GT2 wins for them? Can't be but that would be amazing.

Could you guys please update a little bit faster? It would be great. Anyway good job.

James- Speedhunters isn't a new site. goto Autosport and pay for their service. Its about car culture. Personally I think they are doing a fantastic job

just look at the first photo, these vehicules look like they are sticked with glue to the track :O

Home boy standing on the front splitter makes me chuckle. ~80kg of downforce.

Man... Peugeot is killing it. Any word on whether Audi is sandbagging?

PS3 GT 5 on the banners. What a joke. Good thing we have Need for Speed!

Thanks for the feature Andy! The 430 GT really grew on me and I'm glad there was a switch to low offset rear wheels for some reason ha. I hope I love Risi's 458 entry as much next year.....