This is my final post on the Ferrari Festival – and about time, you might be saying. Well, I simply had to include a selection of the things I saw inside the pit garages – from the future, and a few glimpses on the past…

Above, although I was never a huge fan of the F50 per se, the GT version is, in my opinion, what that car should always have been,  and in this guise it looks a worthy successor to the F40.

Speaking of which, this beauty was tucked away in the one of the garages, the sixth and last F40 spotted on the day…

The 599XX were as much stars of the day as the FXX.

And stopping this charger are these massive brakes.

When the 599XX were started up, people came straight in to the pit garage to see what the incredible racket was all about. 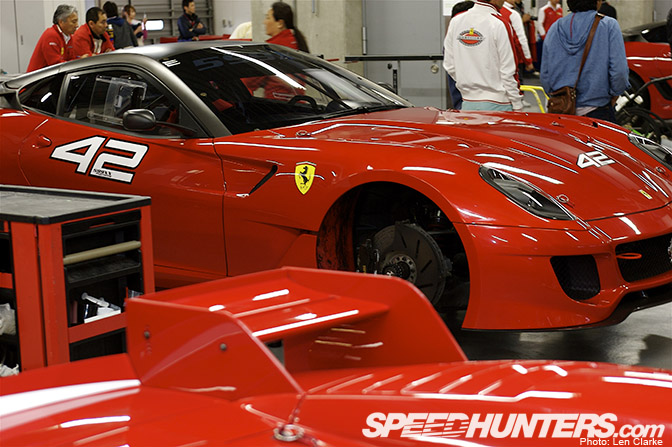 The car looks incredible from any angle.

Naturally, the FXX were causing quite a stir

And were equally impressive from the rear.

Here's my submittal for "Jobs that definitely don't suck."

This was the sole FXX campaigned by a Japanese owner driver.

While this father/son pairing made the trip from Hong Kong.

No Ferrari Festival would be complete without at least one or two Formula One cars. Here there were three, cars from the 2000 and 2002 season, as well as this F2003 (remember when Schumacher took a podium in every single round of the season?) That was in the model above. Quite a machine.

Another angle, with that glorious F50 GT in the background.

At the opposite end of the pit garages, there was a most impressive display of classic machines put on by Ferrari Classiche.

To the same extent that I'm mad about F40s, I am ecstatic about the Daytona. For a car that went on the market over 40 years ago, this is automotive heaven for me.

Of course, I couldn't possibly leave out this pair of 288 GTOs.

Just as convincing from the rear.

The quintessential Ferrari – proving a design this intoxicating doesn't need to be red to bear the prancing horse emblem.

This display of 'only' a dozen or so cars kept me salivating for ages. Every single car an icon for the brand.

Though normally I would never chop the ends off a car, for me this time it works.

There were four 365 GTB4s in this grouping. I was delirious!

Parting shot: The model that has, in recent times, gone 'through the roof' in terms of asking price. The 246 Dino.

That wraps up my coverage of what was an incredibly interesting event, and one where I nearly experienced 'sensory overload' a good few times. It'll be interesting to see how they top this at next year's Festival. Forza Ferrari!

I've seen a Daytona irl before. Jamestown, Rhode Island, and it was maroon. My girlfriend wasn't impressed, but i knew it was a once in a lifetime sight.

I would love to be their!

"...as well as this F2003 (remember when Schumacher took a podium in every single round of the season?) That was in the model above"

Actually, you were a year ahead of yourself Len. Michael Schumacher won a podium in every single race in 2002, not 2003.

So wonderful...how many millions of $$$ on display there...

Being 180 degrees makes it non-V-shape and in fact precisely a boxer? :scratchheatsmiley:

got the opportunity to drive a daytona, work at a local auto garage and guy brought it up from cali. I live in vancouver so it needed it's inspections completed and i was more than willing to oblige

absolutely gorgeous car. silver on red and black interior. Clutch on the other hand, heavy as a tractor. Did that detract at all? not at all, I was on cloud nine.

Yeah sorry guys, guilty as charged - I guess I was a little tired when finishing the post. 512 is obviously a boxer and the F1 cars were 2001 and 2002 models, confirmed with Ferrari press office. Thanks for looking!

i love using that f50 gt on pgr5 hahaa

nice to have a father with an FXX...

how dare you suggest a ferrari engine is like a porche or suburu engine! *glares*