SHARE Driver Blog: Kouta Sasaki>> Behind The Wheel Of The Panspeed Rx7 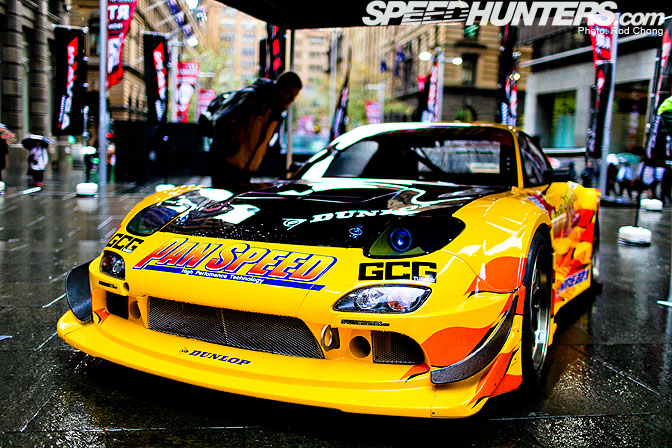 It was an event I will always remember.

I couldn't believe how popular Japanese vehicles were.

But because of this the event had a lot more impact than similar events in Japan.

I also felt the PanSpeed car was in top form. 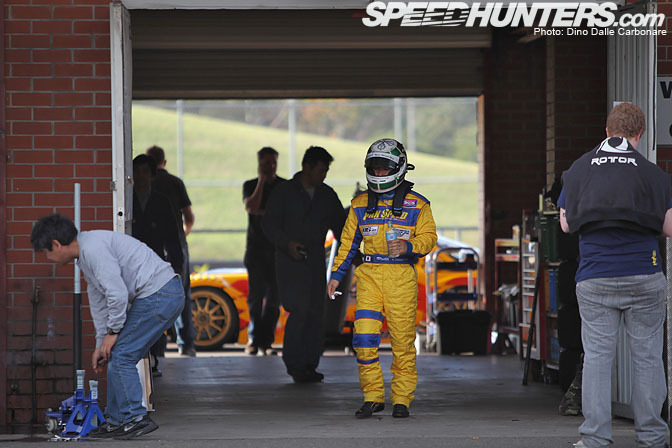 It was everything I imagined it to be, a great country. 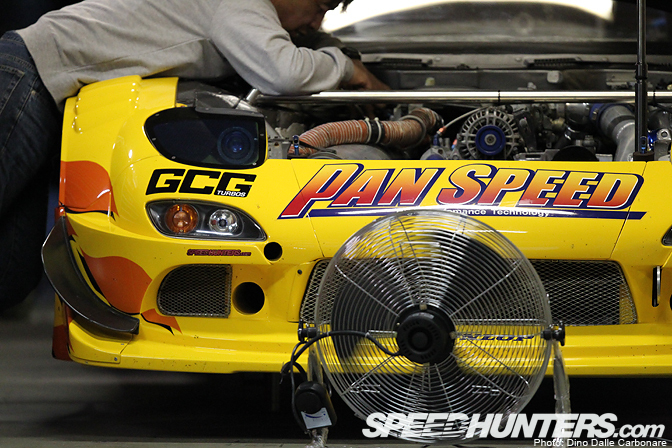 Eastern Creek Raceway also turned out to be a fantastic circuit.

Due to Super GT testing at Suzuka Circuit, I arrived in Sydney… 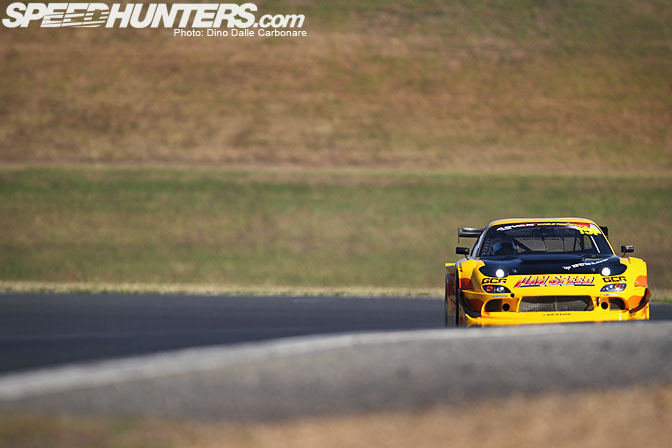 …the morning the testing began. I headed straight to Eastern Creek Raceway. 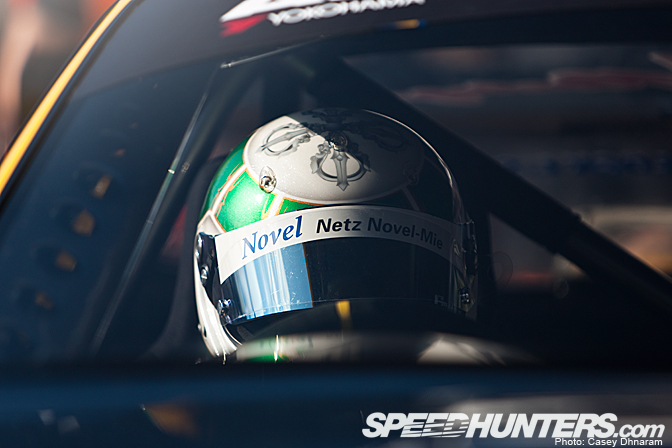 We had no trouble with the car and had a great day of testing. 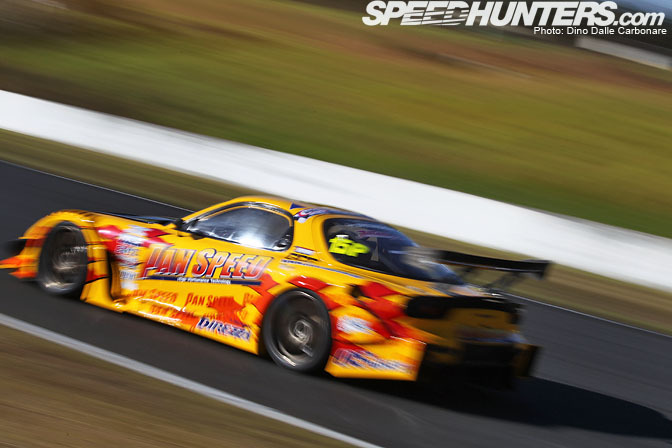 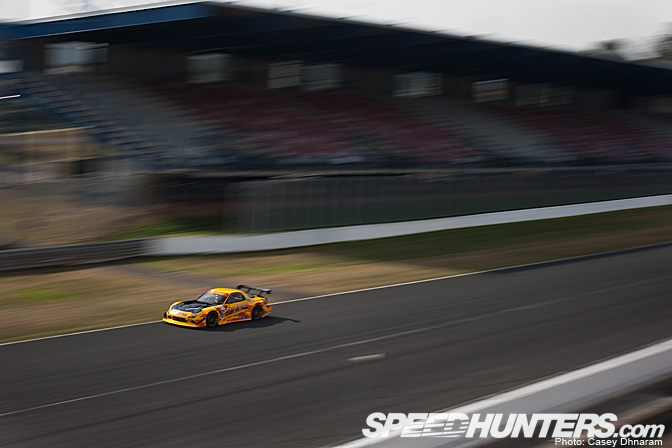 … this was our main priority for the day.

We went with the Dunlop tires that we used to record our quickest lap time at Tsukuba Super Battle.

…were a much better choice for Eastern Creek

We finished the practice day with a 1 minute 34 second lap.

The first day of the event we decided to go with a used set of Dunlop Direzza 03G’s.

They ended up performing better than expected with less of a drop in grip compared to using new rubber.

That afternoon, with the rather distracting glare of the sun, we managed to secure second place with a 1 minute 32 second lap, up with the 4WD vehicles.

On Saturday the crowds were much bigger and even while I was going from the pits to the toilet I ended up with excited fans asking me for pictures and autographs.

It really showed the popularity of the tuning scene in Australia.

Our strategy for the second day was to take advantage of the lower morning temperature and doing our quickest time for the event.

…and also had turbo trouble.

We changed the turbo as it had chewed a bolt holding the intake pipe and prepared for the last attack.

…that actually forced me off the track, which was very dangerous.

I heard from the driver that he hadn't seen me coming, due to the glare from the afternoon sun.

It was unfortunate, but at least we got the top time amongst the real wheel drive cars

But for PanSpeed and myself I think we performed to our best ability possible!!

I am looking forward to Super Lap 2011 and leaving Australia with even better results than last year!!

And to all the fans in Australia…

…thank you for cheering us on, we really appreciate it!!

Many thanks to Daniel Ellis from GCG Turbos for the translation!

seems like something has been intentionally changed in translation..

It was great to meet you Kouta

Awesome driving, and very friendly. More than happy to get a photo!

Panspeed! rocks! love that car......fd owner meself and its great to see rotarys still out there showing the world just what a great little motor they are....people i find tend to forget just how competitive and successful these machines have bein over the years.

Wishing PANSPEED the best for the rest of the year,and hope to see 'SPEEDHUNTERS' do a history lession on 'mazda rotary' in the near furture hint! hint!

Thank you Sasaki for coming!

Hope you enjoyed your time here and come back again!

And thanks for the photograph!

Thank you Sasaki for coming!

Hope you enjoyed your time here and come back again!

And thanks for the photograph!

what an amazing car!! Probably my favorite rx-7 of all time!

I was lucky enough to get a photo with Sasaki-san @ WTAC. What a genuinely nice guy. He even asked if the photo I took was ok in case we had to take it again!

Loving the translated guest blogs on SH this month!

Awesome photos and blog! This is why I love Speedhunters

I was at the corner where he got stuck behind the GTR and it you could really sense his frustration as he tried to get past, guess it only means next years lap time is sure to be quicker!

One of my favourite FD's, so cut i couldn't go and watch it in action. Maybe at Tsukuba...

Was a pleasure to see, hear& smell the car, pictures only capture a moment. Nicest sounding rotor at the track that weekend.

I just want to say thanks to pan speed for bringing their car to australia.

I'm not even a rotary or rx7 fan but i've really liked the pan speed rx7 for a couple of years now and it was great to see it in the flesh!

The panspeed rx-7 has always been one of the fastest cars out there. This was a really great post for the fans of the the panspeed rx-7 and rx-7s in general. Love the post and pics. Good job!!!

Was awesome meeting him and hanging in the pits on saturday with a keen eye on their progress.. Was interesting watching how you have to improvise when things go wrong, half a turbo in one hand and sand paper in the other trying to remove the scrapes and get a nice and clean fit!

Second to last would be so fine as desktop...

Can't wait until Superlap 2011! Hope to see you back here.

What model is that Panspeed RX-7 RC? looks realistic..

Time now for a final look at the 2010 Tsukuba Super Battle, an event that seems to always come to and

For Rod Chong,
I'm sorry for bother you, but it was since you post this photos that I can't sleep (June 2010!!)

I only wanna know with which lens was shot, because I'm really in love with this bokeh and I've bought a 24mm f1,4 while thinking about this picture. Am I in right? Is it a 24?
Thank you
Andrea