Drift Attack 2010 brought many good quality cars, one of those was Krish's slammed, street R32. Sitting in the pits, this skyline really set itself off with its super low stance and tight wheel fitment, which is what we all dig right? So, let's take a closer look!

This is James Dihardjo, the man that introduced me to Krish.

After chatting for a few minutes, we brought the car over to the v8 pit area to shoot some more staged photos.

This R32 look so ideal from every angle, it is really great to see this style of car street registered and driving on Australian streets!

The wheels play a big roll here: bringing the drooling flushness are Work Emotion XD9's, 18×10 +38 on the rear, no spacers…

Little things are also what bring cars together, such as the type M rear pods, Type M side skirts and the DMAX roof spoiler.

Up front we have a large Apexi Hybrid Turnflow intercooler hiding behind a sexy R32 GTR N1 model front bar and lip.

Take a step back, and all the accessories fall into place, giving the car a clean, aggressive look.

Driven by a trustworthy RB20DET mounted with a RB25DET turbo, the car has yet to skip a beat over the 4 years of its life. It also sports a HKS Actuator, 3" dump & front pipe, removed catalytic converter, GTR radiator and a remapped ECU tuned specifically for 1 bar of boost. The car is currently making around 230 rwhp: A perfect amount of power for a street driven car.

Krish was even lucky enough to get a couple of my last beloved 'Speedhunters' stickers that he was thrilled to stick on the car!

It was a pleasure meeting Krish & James, thanks a lot for your time! 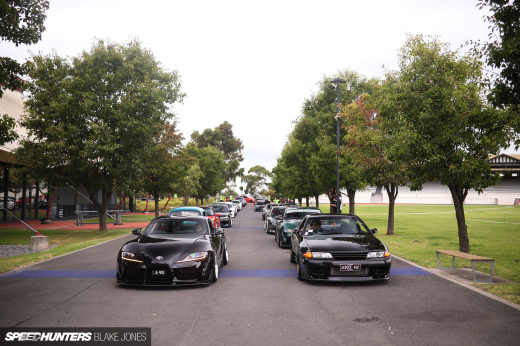 Nice R32, I have to say though, I loved the Nissan Patrol in the first image as well

Do a spotlight on that Cruiser(?)!

that "4 door" is missing a couple of doors i think

More pictures of the XJ please!

You should read that first paragraph again. The 4 door was a different car.

Very nice car, I love seeing Aussie R32s on this site. Maybe mine will be on one day?

Was there any swap for the front fenders?

the front wheels were SOooo wide!

Amazing! I've never seen a 2 door swap on a 4 door! Great job! No really. That car is freakin' awesome. Even if it's not a 4 door!

I love the silver on white. It can so easily fail, but this is definitely one of those few that pull it off perfectly.

i see the linhbergh influence in this article

Or at least spell check and proofread.

I want my HCR32 to look like this. I love the wingless trunk + the DMAX roof spoiler. That Skyline is pure win !

This beast is amazing! Glad to see Krish repaired it all after that "Incident" as well!

The usual of what I like to see on making a GTS-T decent!

Fitment / ride height / bolt on hardware is all good here.

Getting that registered in victoria would be a real pain.

But still don't understand why almost all the GTS-T 32s I see roll on those XD9, no more wheels in the market guys?

the R32bodylines never gets old

it is street registered

what a beauty, with what reads like the right spec.. nice look to the car!!

more idians need to do this than rice up their cars here in NZ lmao!

and Schadenfreude ... what is wrong with that article ? even if he mispelled ... your brain will just read over it .. i dont like people which are just searching mistakes ... the article is nice!

this car was parked directly outside my window at work today...

...needless to say i got zero work done.

ECR33 you fail at life! his not indian and yes he skates it every event! go do your little 1/4 mile with ur hks bov ricer boy!

still drooling over the Tinker sticker...

"...super low stance and tight wheel fitment, which is what we all dig right? "

No, that is NOT what we all dig.

would look great with a gtr grill