By popular request, here's a quick gallery of photos from the Street Challenge Autocross at the Goodguys Orange County Get Together.

As I found, it's damn fun watching hooked-up muscle machines do things usually reserved for vehicles like shifter karts and Miatas.

At least half of the cars running were GM F-bodies of some sort. Here we see TCI Engineering's Camaro about to head out for a run.

I think the immense popularity of first-gen Camaros has given my a big appreciation for the slightly less popular, yet just as cool second gen cars.

I've photographed lots of unique things, and a Ford pickup shredding at the autocross is definitely high on that list.

There were also a few modern muscle cars taking part in the fun, such as this S197 Mustang.

Another '69 Camaro doing its thing.

The F-bodies outnumbered the Mustangs significantly, but there a few out there to represent the Blue Oval. This Mach 1 from Spectre Performance was one of them.

A lot of the muscle car magazines were out competing with their project cars. This '72 Nova is being built up by the guys at Chevy High Performance.

A NASCAR-inspired '75 Chevelle Laguna. How cool is that?

You might remember this Minilite-equipped Challenger from my coverage of the Mopar Spring Fling. Here it is in action.

Why can't cars have cool names like "Valiant" anymore? Here's the Hotchkis-equipped A-body performing true to its name.

The famous Bad Penny '68 Camaro about to lay waste to the course. Love the LED taillights.

Bad Penny has become one the most famous pro-touring builds of the past few years. It's been covered extensively in mags like Popular Hot Rodding and Camaro Performers.

Another view of Spectre's insane El Camino. I'm thinking about dropping by soon to have a look at the shop and do a feature on this bad boy.

One more shot of Elana in her Challenger.

And another of the classy Camaro from Starlite Garage.

The Hotchkis E-Max Challenger. One of the coolest cars ever.

Stand back, testing in process.

That will do it for my coverage from the Goodguys OC Get Together. As you can see, there's much more to it than street rods with billet wheels and "do not touch" signs. 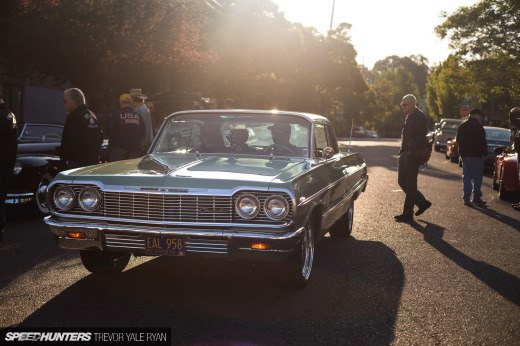 I bet these cars sounded burly. Not really my cup o tea (I'm not a geezer) but a highly tuned V8 does sound nice.

that truck is inexplicably awesome

great cars, all of them

Having grown up in the SCCA, I can't get over the sight of people autocrossing without helmets.

D&*#, look at the width on some of those tires....what I would give to drive one on that course!

These guys must spend a fortune on tires!

The blue second gen Camaro has the perfect drift angle!

Just a hint of countersteer, weight set strongly on the right rear tire.

look at the similarity between pics 2 and 13 :0, i just thought tht was pretty sweet

Lots of nice muscle here. I really like the first shot of the yellow Challenger. And the blue '72/3 Camaro really speaks to me.

Haha, great pics! Come to Australia mate, all the Valiants you could ever want!

Vaughn Gittin needs to be ther enext year with his RTR-X to show them how cone shredding is DONE!

Nice post as always Mike! You're one of my favorite car dudes I've never met. I dig your car style.

These cars are all top-notch. I'm not really a fan of the pro-touring style, but build what you want. Great coverage!

As a teenager in the US thats into cars, you're inadvertently pushed towards the civics, skylines, and rx7's to name a few but I think its good to have a range of interests and this perfectly shows that these muscle cars not only go in a straight line but can also turn and look DAMN GOOD at it.

Always cool to see some American Iron being driven around the corners. Even better that these guys are driving them instead of just taking them to shows.

Some tough looking cars there, makes me want to own and build a "Yank Tank" one day, either a mustang or camaro.

Though watching those cars on an autocross track, is like watching a fat man on a treadmill.

@ Henry: You don't have to be a geezer to enjoy old-school muscle.

So amazing seeing that old detroit iron throwing down around some cones.

@ Ryan : Not a Road Course, its called Auto Cross.

there is no replacement for displacement!! with the same amount of $ in the engine american V8 will run all over any japanise pice of crap all day!!

beautiful cars all day long.. love the Bad Penny with those LED's.. nice..

You should cover Goodguy's Autocross in Des Moines or Kansas... I will more than likely be at both events trying to beat up on some of those high dollar muscle cars in my cheapo rat rod built to handle...