For the first time in over two years, I ventured back on to the stages to cover the Carlow Stages Rally, home to the MK2 Escort Challenge. It's an annual event, with stages around the Carlow / Kilkenny countryside in Ireland. Although the event is not exclusive to Henry's finest, the Escorts do make up a solid chunk of the competing field. 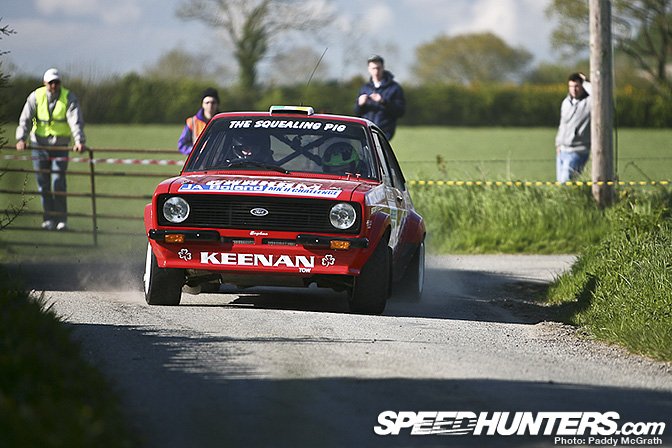 Dessie Keenan returned behind the wheel of a MK2 in Gary McPhillips car using his own engine and gearbox.

David James is always a fan favourite, his yellow and black colours are infamous on the stages.

Local driver Sam Smyth slightly overshot this corner at the start of SS1, the cure for which was more right foot.

For any of you who are interested, the MK2s are quick on the straights as well. One of the cars was clocked at 123MPH. Mightened sound fast compared to what the current stable of F1 and GT cars are capable of, but look at how at narrow the roads are. No gravel traps here folks …

Liam Howlett from yesterdays 'In The Moment' post, defines everything I love about MK2 Escorts and rallying in one photograph. Speed, aggression and determination.

Johnny Murphy accelerates hard from a junction on SS7.

Trevor Mulligan steers his MK2 from the rear on SS1.

Another great thing about rallying is the support from fans and spectators. Two of these guys are marshalls, who give up their own time to ensure the safe running of the stages. These were all on stage before 8 a.m. on a Sunday, just to watch and look after one corner's action.

As I said at the start, it's not just a MK2 event.

Terence O'Shaughnessy had an unfortunate off on the first stage. The car was returned in one piece and later provided 'Double 0' duties, clearing the stages ahead of the field of competitors. I think we'll have to try and get a more in-depth look at this car shortly …

Eoin Doyle in his Impreza WRC tries to imitate the MK2 drivers on SS1.

James Travers in his Renault Clio finished an amazing 13th overall at the end of the day. In a field of 80+ competitors including ex-WRC cars you can see how much of an achievement that really is …

Mark Cullen in his rare Darrian T90 retired after SS2.

Simon O'Rourke in an Evo VI was the unfortunate subject of a 'John Brooks One/Fifth' experiment.

The winner of the MK2 Challenge event was English-man Simon Mauger. Check out the amount of dead flies on the front of the car, proof if needed that these guy's don't hang around.

I hope to bring you more Irish rally coverage throughout the year along with some features on the top competitors and their machines.

Here in holland we got like a dozen of the latest WRC cars running, al by guy's with more cash then skills in my opinion ... altough those cars are fast as hell, i like to see the more amatuer like cars en drivers giving it all, its why i like the fact the clio finishd 13th, kudo's to the driver

Class photos there what a day out hard to beat rallyin on a nice sunny day like we had yesterday. Great event il def be headin back down nxt year for another look.

Thats incredible converage and images. Thank you so much. I have a new lust for escorts. Shame theyre so rare.

would love to go there... big fan of the old escorts

i want every one of those escorts in my garage immediately.

i think the Escorts were just so built for rallying.. being svelte, yet chunky and squat.. here in the UK they have a massive following akin to the AE86's and Rotary Mazda's do in Japan for example.. i love 'em.. - thanks for the welcome reminder

This is one car that I wish my daddy never sold... Hope I can get my hands on one in near future... All hail the escort!

Isn't the 'Darrian T90' really a Davrian, no Darrian?

Great article and I love the photos.

You might want to proof read the article next time tho...

It's definitely a Darrian : http://www.darrian.co.uk/

@Xlar I've just read over it now, apart from nut instead of not and the fact I can never figure out the whole S and apostrophe S thing, I don't think I've gone too far wrong ? Should I be worried I can't see any other errors ?

I think that maybe I was being to harsh, sorry

The only other thing that I spotted was "Mightened".

I really did like the article tho as I did find it entertaining.

No problem XLar ! Hahaha, I was so certain 'mightened' was a real word ! See you learn new things every day !

Rallying FTW, really glad to see this on Speedhunters, and mainly historics too! Need more of this kind of coverage, good work lads

Rallying FTW, really glad to see this on Speedhunters, and mainly historics too! Need more of this kind of coverage, good work lads

and where can I get my Impreza WRC?

Already I can hear the call of those deriding the ride height of this eight/six. I do have some unfortunate

Rallying was always my first love. It's a family thing really, an entire lineage before me was involved

What a year. Just what an incredible year it has been. To think, in January of this year I was still