There was just so much goodness in the parking lot at the Mooneyes Street Car Nationals on Sunday that it would have been a pity if I didn’t dedicate a whole post to what I found. Starting off with this immaculate Mitsubishi Debonair. This car was built in 1964 to go head to head with the popular Toyota Crown and Nissan Cedric in the big luxury sedan market. We have seen a few of these cars in the last year from the various Mooneyes shows but never one kept in its unmolested factory spec (wheels aside).

It has a few touches of Lincoln Continental in there and looks remarkably like a Toyota Century, although that car came three years after it! Check out the two tiny exhausts!

…all the way to outrageous lowriders like this Impala…

Seeing a Eunos Roadster parked up next to this huge thing was rather comical! Two different schools of thought.

You really can’t anticipate what you might run into at these kind of events! I have never seen a Suzuky Jimny done up like this, and on Hawaii plates, Japanese ones nowhere to be seen!

How about this multi-continental selection, a Datsun pick up next to a VW Camper van and a 1963 Chevy Impala.

This Malibu station wagon looked like it had recently been rescued from the junkyard.

Yep this is Japan!

This 1970 Dodge Challenger was absolutely spotless and should have been in the show area, not left alone in the parking lot!

There was a lack of classic Skylines this year but I managed to run into at least one nice example, this very clean R31 wearing an aftermarket chin spoiler and period correct mesh SSRs.

This is the complete opposite of understated.

1969 Stingray Convertible sitting all alone in a corner of the parking lot.

Managed to grab a quick shot of this old Toyota Chaser just as it was about to leave.

Here is a rear shot of that ultra-low Prelude from Part 1. Check out the how the rear wheels have cambered in following the suspension drop…bordering on VIP-style angles!

This Camaro Z28 must have circled the car park a dozen times while I was there shooting, probably waiting for a spot close to the entrance to free up.

Plymouth Belvedere, the first I have seen.

1960 Cedric Custom, the first ever generation of Cedric produced.

…and this shocking Cadillac from the Saitama Riders crew.

The pink treatment extends to the wheels too! Very interesting and, ehm, unique…

…but I prefer this more sedate “Bayside Blue” Coupe deVille!

This must be the only old-gen Golf I have seen at these events, wonder why it doesn’t get a bigger following in this scene.

Took this as I arrived early in the morning as the parking lot was still filling up.

Quite liked this Z11 Nissan Cube lowered and fitted with Moon Discs. Looks like the owner also had the Nissan logo painted when color-coding the front grille.

The Nissan Crew is usually used as a Taxi in Japan or the occasional Police car. I recently sat in the back of one of these after getting pulled over for speeding. I don’t like these cars!!

Don’t miss the final installment from Odaiba as I return to the show area for one last look at the Street Car Nationals.

Vintage Vibes At The Race Of Gentleman 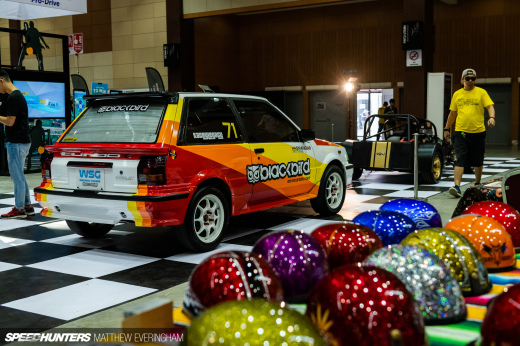 In The Moment: An Introduction To Malaysia’s Art Of Speed

That Prelude looks like its rockin chopped springs (or no springs and bumpstops) if ya ask me. Not so flash.

Great great pictures Dino!!..Bring us more ol'skool JDM into your final installment and that would be excellent!

great pictures. loooove that black nova. and i like that look of that cube, those moon discs really set it off

so many interesting cars here, the Dodge Challenger is just right, the Nissan Crew looks cool on those rims just needs a little more love, i even like the Cube sitting quite low.. i like the Plymouth Belvedere too.. as for the Prelude, he just needs some decent wheels to set it off.. the Suzuki Jimny (Samurai) is a great little car, even now i see them whizzing around in the UK. - great post and photo's i could look at this 'fest' all day - thanks - keep it coming..

Dang. I'm glad to see how our USDM cars is appreciated overseas.

amazing. hard to believe some of those pics are in japan!

Really hard to believe that some of those cars are in Japan. Great shots and write up!

Isn't the 'Jimny' a Suzuki SJ? I always thought the old boxy shape was an SJ and the new replacement was the Jimny?

I really enjoy coverage of these Japanese Mooneyes events. I had the awesome opportunity to go to one in Yokohama in the fall of 2007 and I loved every minute of it. It takes a certain amount of dedication to own and maintain some of these cars in Japan as it seems to go so counter to the prevailing "normal" culture. And most every one I saw with vintage 50's rides were also totally into the whole Rock-a-billy look and style. So, so cool to see in a place like Japan. Keep it up Dino! You're making me wish I was back there again.

I believe that lip on the R31 is not aftermarket, but the factory mechanical "Insta-lip" that can be triggered to flip down or up from inside the cabin.

What's parked next to the '59 Chevy ragtop?

Yeah that was a Suzuki SJ, a whole liter of mega engine power 1.0 4x4's are the way forwad (ive had one for 6 year and loved every minute of it)