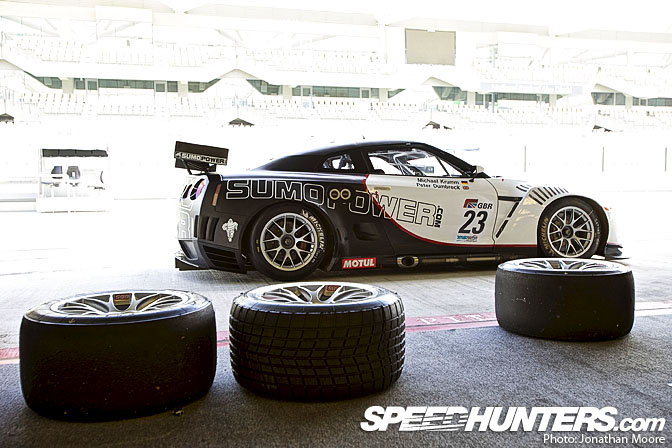 It's Tuesday, three days after we should have left Abu Dhabi and started preparing for the next round of the FIA GT1 Championship at Silverstone in the UK, which is in less than two weeks' time. The Sumo Power team are ready for round two: they want to be given a level playing field to show just what the GT-R can do… The two cars are already back in Europe, courtesy of freight transport – hopefully we won't be far behind. In the meantime, here are some desktops of the GT-R at the amazing Yas Marina circuit. Be sure to check out video of the races on the GT1 TV site as well!

The CLK GTR: My Hero Car

YESSS!! THANK YOU very much!

LOVE the name Sumo Power and picture of the cars placed 9th - 13th - you should make and sell placemats from it (no pun intended). Really like the matt black paint (the car looks like a stealth Sumo bomber) and the hub cab shots too... and can I have a mechanics suit with goggles to face our repro suppliers with? Does that track really run under the hotel? Have you had any sleep? Corvettes may sound loud but from my experience are a pile of very expensive (and evidently inflammable) plastic. Hope you get home in time for Silverstone in one highly tuned piece.

Well, Absoltely , Car looks good but they are slow!! BOP test? he he , in onesty need to be clever and real racer , but sumo unfrtunately is not!!!