I met up with a bunch of the local rotary crew here in Vancouver last week, had some beer and some wings and did a lot of bench racing, always fun to meet up with some Rotangs. The late night antics of a couple of the guys was pretty fun too. There may or may not have been an 'incident' with a Toyota Prius, I can't comment on it here though.

Check out Jean-Marc's FC that pumps out 400+ RWHP, 13B half-bridge ported with a Garrett T67 turbo I believe, tuned via a microtech ECU, and custom stainless intercooler piping running to a nicely sized front mount intercooler. Sounds pretty mean coming out of the Racing Beat exhaust. 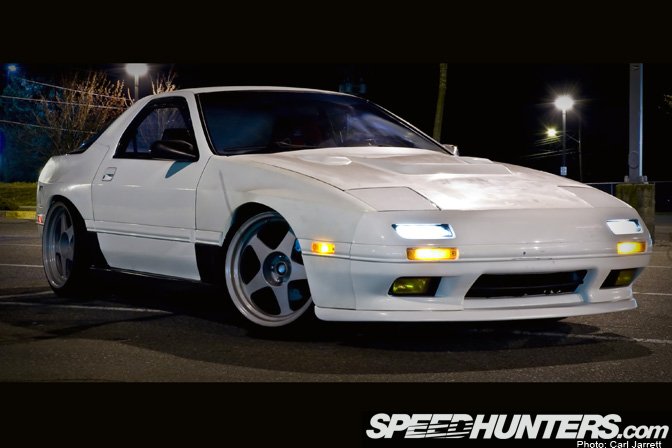 Eric's white FC looked pretty nice, despite the primer white overfenders and 1 out of 4 polished wheels, the overall package is pretty well thought out. Car seems to be an ongoing evolution of itself, starting out as a non-turbo RX-7, has gone through a few different looks over the years. Under the hood is a stock 13B Turbo II, on the outside he's running Foresight fenders and hood. Lots of stance with the Kei Office coilovers keeping the 18" Regamasters planted. Inside is a Momo wheel with a Sparco Sprint racing seat.

My buddy Dave's car is another Turbo swap car, although I think he needs to decide which wheels to run! 15's AND 17's? You crazay! Anyone selling 2 more P45R's? He's got some Powered by Max coilovers and RB sway bars in there too. Dave's got big plans for this car, right Dave? *cough* trackday car *cough*

Pretty sure Eric's got the best stance of the night. I think he's running 225's all around. Notice how this one wheel is the only one polished?

Miguels car, which also started as a non-turbo FC, that's 4 of them! He's got a T04 hybrid turbo mated to the stock engine with a streetport and a 3" exhaust. He's running Megan coilovers and some staggered Work Equips. 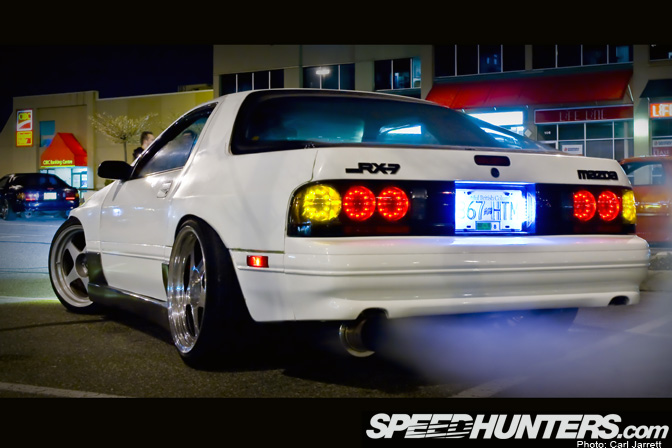 Eric's car has some crazy LED taillights, definitely make the rear look a bit more modern, not sure if I'm a fan of them or not.

Dakota has one badass FB sleeper, pretty stock on the outside but under the hood is a streetported S5 JDM 13B running a T04S turbo, tuned with an LT10s, making 404rwhp at 15psi! All in a 2,200lb car..

There were a few other rotaries there including an FD but didn't get a chance to snap all of them.

More on the prius incident!

looks really good with the car

so dope, all three of them

FC's are so so sick more pics more pics!!!

Nice to see some more Vancouver love coming from SpeedHunters!

beautiful cars, to bad ive never seen them running around on the street, tho im sure i would get my ass handed to me lmfao.

dam that white fc on the regamasters is look oh soooo sweet...deff the best in the crew

Its good to see some love for the FC

Besides the FD, the FC is also one of the best RX7's ever produced!

Ahh the ol rotary meets in vancouver...how i miss them

Hey CJ long time no see! Hope all is well nice to see the rotary love. On another note.....those desmonds look really good especially the regamasters on white.....mmmmmmm

How about some more pics of the FB? Show the old chassis some love

wish i could have had my car there that night, but i'm fighting the never ending battle with aircare haha.

you wanna talk about an FB sleeper?

there's a decent rotary scene over here in Ontario as well, with RPM in Cambridge holding down the fort. We've even got a Fortune FD as i mentioned in another post

hmmm? i wonder if there's a Rotary scene here in the UK?? i like those funky LED's on Eric's car..

dakota's killer FB!!! what rotang is correct! the first time the FB was dyno'd it made 404whp@15psi in 36C running tempatures!! the second time he had changed to a bigger wastegate and IIRC a different tune and it did 430whp@15psi(not sure on the running temps but they were significantly cooler). as of friday april 9th his fasted time on the 1/4 mile is 12.56@120. congrats to dakota on building an insane sleeper!

love the white FC and respect to the others as well but man I was hoping to see a hundred pix. What a disappointment! Where have all the good FCs gone?!?!? I miss mine so much, I will have to build another, thats most of the fun anyways. Thanks for the FC coverage though, long live aluminum 4pots and big T2 LSDs!

Nice, Any chances of seeing a desktop of the first pic?

Got love for the rotary.

I like the FC with the Equips Carl, he has good taste lol. I am not a huge fan of the LED's either. I think if the bulbs were smaller and in a larger/ tighter group it would be more subtle.

Dakota's FB has got to be monster in disguise! That son of a bitch must pull like no other.

Hey awesome pics! Where are you guys getting tuning done? I can't find anyone here in the NW that specializing in rotary?

73turborotary: There are plenty of tuners online that can get you in the right direction AND educate you so you are able to tune yourself. I highly recommend BDC motorsports.com

you need to find the guys from ForceFed in Abbotsford. I saw their street driven RX7 trap 145mph at Mission dragway... 3 rotors a plenty

Loving this RX7 Shoot. I miss mine terribly and need to find another this winter. This time, with a turbo haha.

heres a vid of dakota's FB http://www.youtube.com/watch?v=Pvp_sqF7hcg cheak it out!!!!

Hello, I came across your site while googling RX7, and wonder if anyone in your group would be interested - I'm selling my Mazda RX7.  - it's a Red 1990.  (Pic of one on your site) It's well maintained and has low kms.  I bought it brand new and have been the only owner.