When you hear of the name Top Secret, or of the legendary tuner, Kazuhiko “Smoky” Nagata, you’ll conjure thoughts about cars with million-billion horse power and are driven at massively illegal speeds in various countries. If you’re unfamiliar with the name of Top Secret or Smoky Nagata, let me direct you to this youtube video. Your education will thus be complete upon viewing. You’d be hard pressed to believe me that these two Nissan 370z a far fetch from the legendary titans of lore but rather, these two cars are delectable, but saucey, wood nymphs.

If you were keeping up with the Speedhunters twitter and facebook pages earlier this month, you would already be somewhat familiar with both of these cars as we teased you guys with a few cell phone camera snaps during our trip to Texas.

If not, than let me introduce you to the Planet Zero/Top Secret 370z. The name Planet Zero might ring a bell as Rod Chong and myself ventured out to Houston in the autumn of last year to see what the whole Texas tuner/ricer community was all about. This 370z is owned by John Leigh, a person that quite familiar with Top Secret cars. If you remember correctly, we took a look at his OTHER Top Secret car, a G37.

In stock form, this 370z started off with a 268 wheel horse power. After the tune from the infamous Smoky Nagata, the car resulted in… wait for it…… 289 wheel horse power! This car isn’t about power but rather it’s about throttle response and well, touching you in the nether region of your trousers in ways that’ll top that Prom back-seat after party.

Here, John Leigh will explain the difference between a stock 370z and a Top Secret 370z:

“Driving a stock 370z is was a little less exciting that I would like it to be; The most annoying thing is how much the car has to think before it realizes you have your foot down. The drive-ability of the stock car is the pinnacle of conservative sports cars. It’s like eating steak at Denny’s.

Smoky’s PROcess tune fixes this problem. It replaces your boring wife with Jessica Alba. The difference is, you’ll never be late for dinner and you’ll want to eat dinner 10 times a day.

Same with the car, the driver-car romance comes to life and you’ll want to drive it every time, everyday. Naturally, having a touch of Smoky means serious response, no speed limiter, higher redline …and a dash of additional HP. All the ingredients you need, to get in more trouble.”

With that taken care of, let’s talk about just what exactly makes this 370z replace your significant other with the likes of Jessica Alba….

The car is set up relatively simple but the modifications it has are all top quality products. A set of Top Secret Super Damper coilovers were imported from Japan to improve the “less than exciting” stock 370z handling. John really wanted to make sure the car would stop so he employed a Greddy eight piston front and four piston rear brake system.

A Mines carbon fiber front splitter improved the front appearance of the car quite significantly.

Check out the top quality carbon fiber work. The last time we saw something of this quality was when we looked at the Mustang RTR-C.

Of course, something of this quality gets the Top Secret seal of approval.

The engine is relatively untouched except for Top Secret’s dual intake system and a Top Secret titanium exhaust.

Another Top Secret mark of quality. 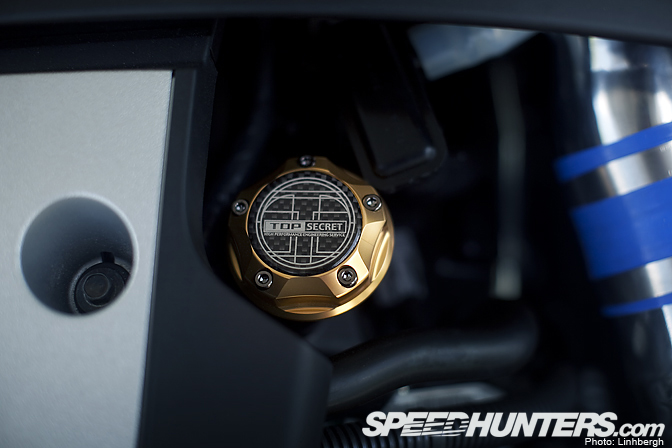 Next, we’ll look at The Planet Zero/Top Secret 370z’s twin, the Baker Nissan/Project Mothra Top Secret 370z. Quite a mouth full, no?

Before we get into anything else. Let’s mention that this car is sporting a brand new Powerhouse Amuse Vestito body kit.

It just completely transforms the look of the car.

There are hints of Porsche 911 with this body kit –and thats not a bad thing….

Stillen sway bars were also installed to help improve the car’s handling that much more.

Project Mothra’s engine and drivetrain were done up just a bit more than the Planet Zero 370z. The Top Secret dual intake system was added, as with an NST over and under pulley kit, and also a pair of Stillen ceramic headers. The drive train was beefed up with a new ACT clutch and a lighter flywheel from Stillen. A beautifully crafted Amuse titanium brace bar was also installed. It was painted to match the exterior of the car.

The interior was also beefed up quite a bit. A full Kenwood Excelon sound system replaces the not-as-impressive stock system and a reverse camera was installed with the help of a Blitz R-VIT data link system.

A B&M short shifter was installed for that extra bit of pop-and-lock shifting. Though, I was surprised that neither car had the Nissan Synchrorev match system. I drove a fully decked out Nismo 370z late last year which had that option. And well, it makes you feel like a driving god that even the likes of the Stig wouldn’t be able to match.

I guess when you have a car tuned by Smoky Nagata, you don’t need such options, right?

Both cars’ ECUs were PRO-cess tuned by Smoky himself and any car that is lucky enough to get this treatment gets this very special, Smoky Nagata, seal. When you see one of these badges, you know that the person behind the wheel is grinning ear to ear… and has been for a long, long time.

Look at these two nymphs. They’re no mega horse power monsters but cars that will delight every sense in your body. So when you catch the gaze of either one of these cars, they’ll beckon you to come closer to step into their luscious interiors. And once you press the START button and hear the perfectly tuned V6, all pure thoughts instantly leave your mind and are replaced with only the most vulgar, lewd and lustful thoughts.

These cars will tease, please, and push you to a point of ecstasy. Well, at least until the the local fuzz burp their cherries at you….

P.S. All of the above mentioned parts can be purchased at SWAT Performance.

tht amuse kit is awwwwwwsome jus take another look at the rear OMFUCKING!

top secret has always impressd me!

Unfortunately, I am not impressed by the 370z's horsepower but it is an irrefutable truth that Nagata is a Tuning Guru!

Please offer wallpapers of these:

PS: The blank lines are a nice touch

love the new 370Z as a car.. a def. improvement.. Advan RS-D's look very 'nice' and suit it down to the ground.. love the strut brace under the bonnet too some sensible styling cues..

Ugh I want one SO BAD! The Z34 is such a badass car, I love the styling and am glad to see TOP SECRET give the car some love. Let's hope in the future we see 800HP Wangan monsters from Smoky himself.

Beautiful cars. A little over hyped on twitter/fb IMO but definitely nice. I was expecting some 500+hp beasts since Smokey was involved. I'm looking forward to seeing that S14

Some Desktops please. I love your style of shooting. Especially like in Pic nr.2

The badge that all the PROcess tuned cars got was a different badge...

Thank you for a perfect coverage of these two cars and the major huge props! Swat Performance is ready to serve. Thank you to Planet Zero, Baker Nissan and of course Speedhunters.com!

where can I get the top secret oil cap? I could use a few ponies in my car

Amazing cars, i would like to see something rotary from Top secret!

the advans look good but those i forge look like shit! whats up with the rubberband size tires and stock height??? its got alot of money into it but the stance is off and the wheels are whack. why would you pay homage to a great japanese tuner and then buy american wheels that are knockoff's of a european wheel design anyways??? just doen't make sense. but the other 370 is looking proper.

Actually, when I hear the name "Top Secret", I think of a really funny Val Kilmer movie from the 80's. But then, I'm old.

These cars are too awesome to drive! Yeah!

Thanks for the great article. What a wild weekend that was. I can promise you that there is much more to come from Mothra, Baker Nissan and Planet Zero.

I LOVE those rolling shots linbergh!

I love every bit of these cars. That Amuse kit has got to be one of the best looking kits ever made...and im not a fan of body kits,

The bodywork on the cars looks sweet, though.

please can you send me 14. and last picture in original size to my mail?? D.M.cust1993@gmail.com

So now decals, some bolt-ons and an RH9 tune on a stock ECU make a car a "Top Secret" official car - lame. So much for the good ole days with crazy engine swaps, full body conversions, and the infamous gold paint...

The Vestito kit looks odd w/out the emblem on the front, and I love how they show off a completely stock engine aside from some basic intakes. Like I said...so much for the Top Secret of yore.

And as for the Amuse and TS parts, Swat Perf isn't even a real dealer for either of these companies, they gray market everything, so if your stuff is defective for any reason, you're SOL.

Oh yeah, and you can't forget about the one guy who had his perfectly running Z ruined after it was tuned by Swat/John/'TS'

Both builds are incredibly awesome.

Yes as always two beautiful builds and also a great article by Linh!!!

Great article. Can we get a wallpaper on the first or last pic please?

Been dreaming of seeing the Amuse kitted 370z for a while now. Thank goodness for you guys.

Your photos are always so dreamy <3

Hell ya..Planet Zero in the house.. oh Hell yes to Jessica Alba. tmw is her bday. we gone celebrate

Well I think both cars could done with out those ugly stickers all over them... Vary ricer..

That Amuse Vestito body kit is the best I've seen for the 370Z.

The pics came out great to bad you didn't put the one up when we all got pulled over..... Good Times

Wallpaper of 2 and the 3rd from the last PRETTY please!

@ myphonyaccount , that s not the whole truth. Sure, a well designed light and small car CAN be better than a poorly designed big and heavy one. But a small car will always have a tougher crash if it meets a big and heavy car, that s just plain physics