The last time I shot a Porsche Club track day was late 2009 at Lakeside Raceway. This sexy RS GT3 unfortunately lost control over the bank and scraped the wall, damaging the rear bumper and the carbon fibre wing. This time he was back out in action and kept the car looking immaculate throughout the whole day without incident!

I was fortunate enough to see a quick and nimble Radical SR5 hit
the track in the afternoon session. The build quality of this car
speaks for itself: light weight, powerful and bloody fast, it was without a
doubt one of the quickest cars around the track. It's easy to see why
Radicals are held in such high regard amongst all motor enthusiasts.

Fast, slim and ready for action, I struggled to keep up with it through the viewfinder… 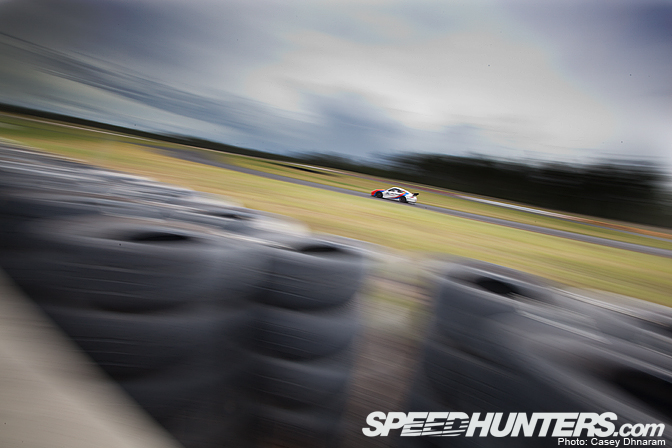 The afternoon session saw some of the purpose-built Porsche Club track cars doing testing. Under a thick cloud cover, these unreal machines were pushed to the limit lap after lap and the cool change in the weather was without a doubt welcomed by all. 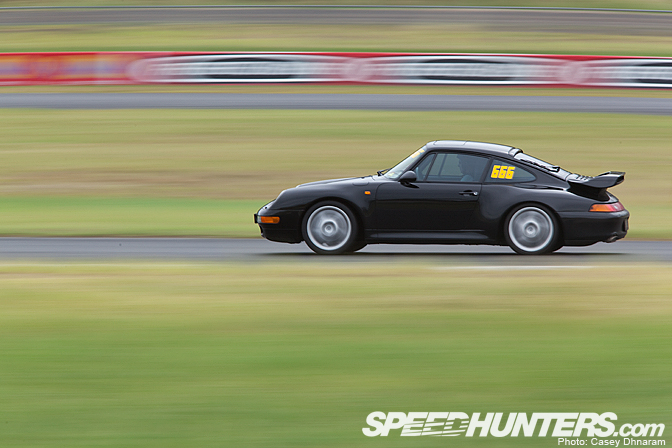 This slim, sexy Porsche 911 is driven daily by a colleague's mother – but today, his father had it out on the track. It has only been out a handful of times, now running semi-slicks all round which has improved overall grip and track speed. However, the decision has now been made to retire this 911 from track duties, to be replaced by a preloved 2000 model GT3. I really look forward to seeing it out on track with plenty of development in the near future. 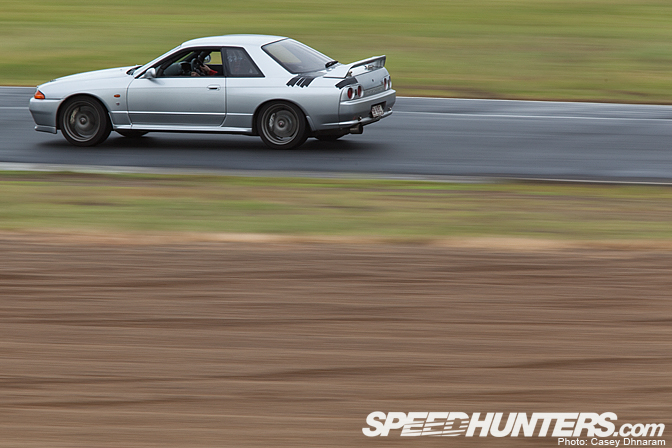 The owner of this Godzilla certainly wasn't being intimidated by the quality of the Porsches on track… Well, he might have been — but did well to keep concealed! 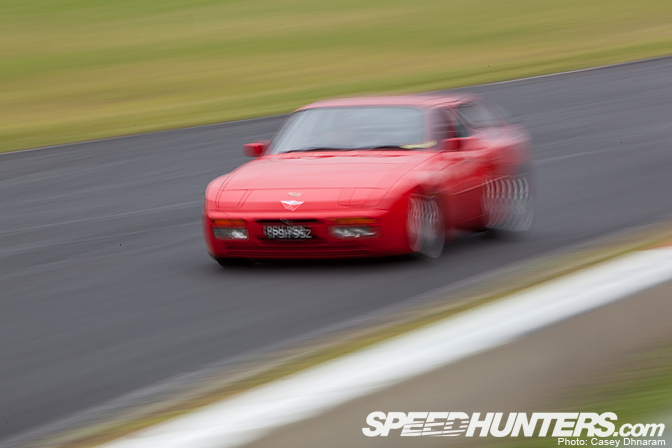 One of my favourite cars from the day — and from Porsche in general — has to be this 944. This beauty was in impeccable condition and, despite its age, had no problems maintaining consistent lap times throughout the day. 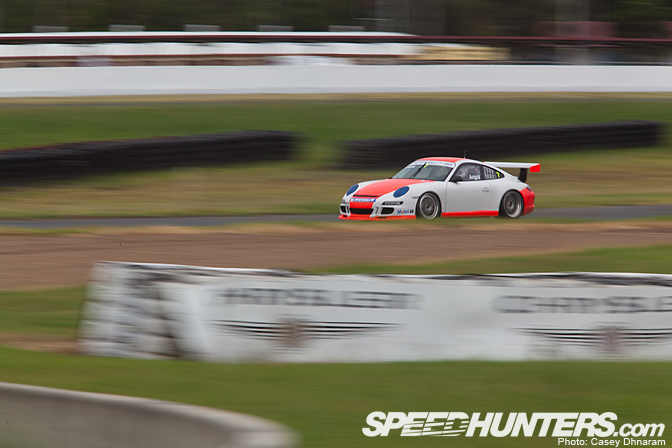 Over in the distance I saw a fluro Porsche. 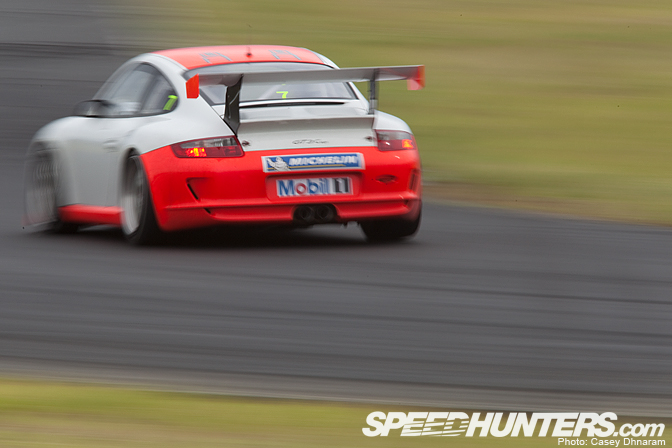 Another Porsche Club car, and damn, this thing was quick! 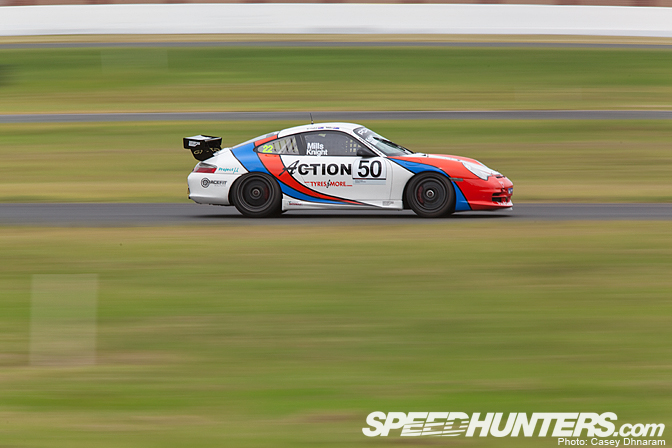 The unique note these highly modified Porsches create is seriously something you just have to experience in person. 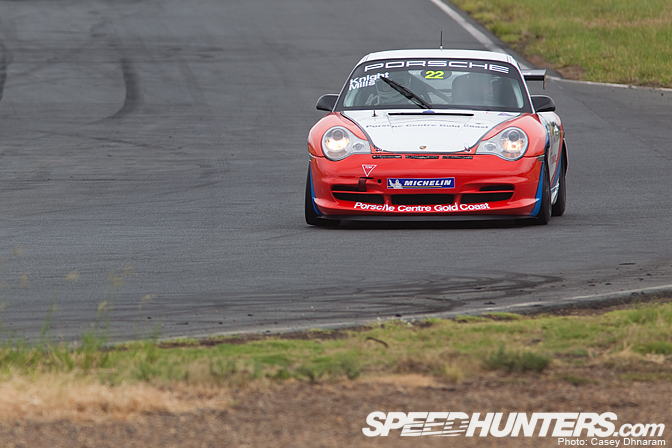 By the end of the day, many of the drivers had made the decision to pack up a bit early in a bid to beat the impending storm. But nothing could deter the driver of this Porsche Club car, who used the cooler weather and vacant track to drive on the limit, lap after lap. 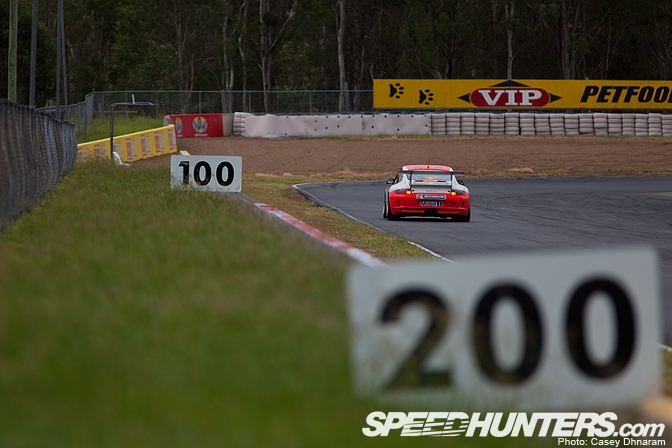 I seriously couldn't get enough photos of this guy. 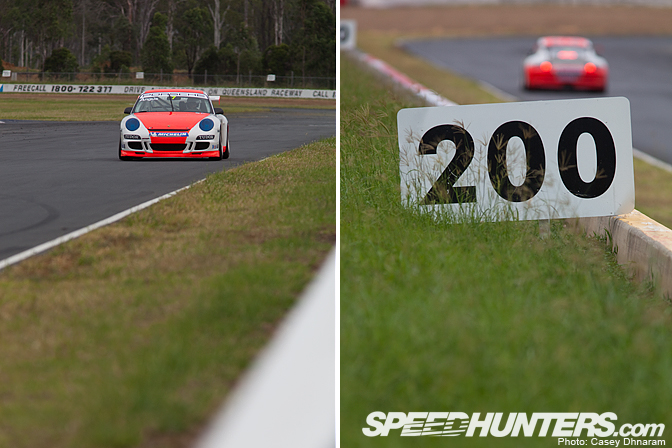 As the storm rolled in, the lighting turned dark and there was an eerie sense felt by all at Queensland Raceway. This certainly was a great way to finish what had been a great day, with fun had by everyone watching and, more importantly, all the drivers. 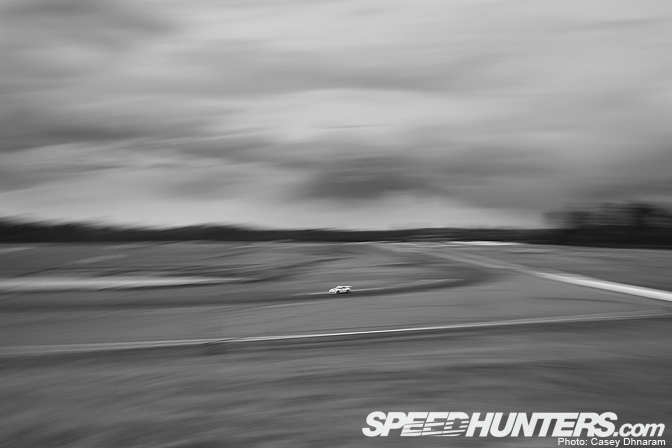 This last image was taken from Turn 1. To capture the shot, I attached the wide angle lens on the camera and wound down the shutter. I think it came out quite well.

I will definitely be keeping up to date with these events and attending as many as possible.

Face To Face With The Taycan

Sweet post. You cant hate on Porsche.... Love the cars and shots.


"One of my favourite cars from the day -- and from Porsche in general -- has to be this 944. This beauty was in impeccable condition and, despite its age, had no problems maintaining consistent lap times throughout the day."

uggg,i just threw up in my mouth

Great shots casey, and your grammar/spelling/wording has improved tenfold. thanks for the coverage.

those first couple pics with the Radical make me so dizzy, other then that, sick.

Good photos, wording of sentences and grammar is improving as Zac said. <3 the Porsches

Great shots and a great write up!

Casey - That would be Terry Knight you were shooting. He's the Dealer Principal at Porsche Centre Gold Coast.

That used to be a Sydney based car, obviously it now resides in sunny Queensland! Well looked after and as you saw, pretty quick!

Stunning photos as always. "THE NITZ" can go smell his arse.

Great post! The cars are stunning. The porsche 944 is also one of my favorites and I am not always sure why, I just know that I love those cars even banged up and abused.

I want a wife who daily drives a 911 and then lets me take it for track days on the weekends!