Last week I headed over to the World Racing shop in Torrance to check with in the guys as they readied Chris Rado's time attack Scion tC for the upcoming season. It turned out the car would actually be seeing some dyno time that day, so the scheduling had worked out perfectly.

Chris Rado's exploits have been featured numerous times on Speedhunters, but for me it was my first visit to the World Racing shop.

Both Rado and his team are known for their bold, unique personalities and this is clearly evident while visiting the shop.

…as does the shop mascot/part time guard dog, Slick.

After a record-setting season in 2009, Rado's time attack tC has undergone a few upgrades for 2010. One of the changes is a revised turbo manifold setup…more power is never a bad thing, right?

Interestingly, the manifold on the race car is very similar to the one that World Motorsports makes for the street-going tC turbo kit.

After a full year of competition the front end of the car has also been heavily reinforced.

This includes new, stronger mounts for the infamous fwing.

As I observed, the guys did some last minute preparations before the dyno session.

Then a few minutes later Mr. Rado himself showed up in his blacked out Sequoia.

Sure he was about to strap his beast onto the dyno, but Chris just seemed just as excited about the new Pelican cases he had just picked up. Crazy dude.

After Chris arrived, it was time to pack up and head to the dyno spot.

…so a simple flatbed tow truck was hired for the job. I'm not sure if the two truck driver was expecting a car like this.

With the car loaded up, we were off to the dyno at SR Motorcars in Gardena, just a few short miles away.

Within a few minutes the car was strapped onto the rollers, and warming up for the first of several runs.

As the car warmed up, Chris worked on his impression of Vin Diesel from the Chronicles of Riddick…

Finally it was time to see what she could put down. First up were a couple runs on lower boost settings. I made the mistake of walking right behind the exhaust pipe after one of the pulls, and my eyes were not liking it. Lesson learned.

When all was said and done, the car laid down 890 WHP and 777 ft lbs of torque at 30 pounds of boost – a number the guys were quite satisfied with. Besides the front-drive car, the engine setup was also being tested for use in the new AWD Scion tC time attack car that will debut later this year.

In less than two weeks the FWD tC will make its 2010 competition debut at the Redline Time Attack season opener at Buttonwillow Raceway.

Thanks to Chris Rado, Rob Cardona, and everyone at World Racing for letting me tag along with them. Can't wait to see what happens at Buttonwillow! 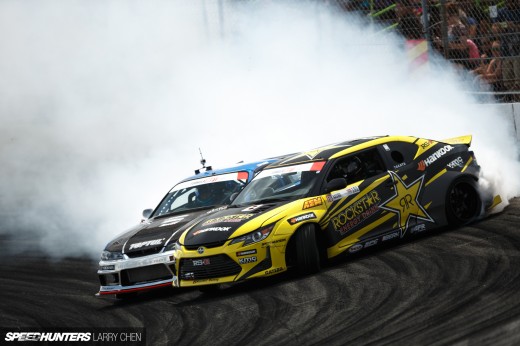 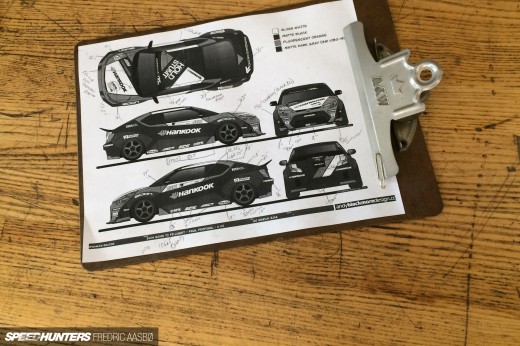 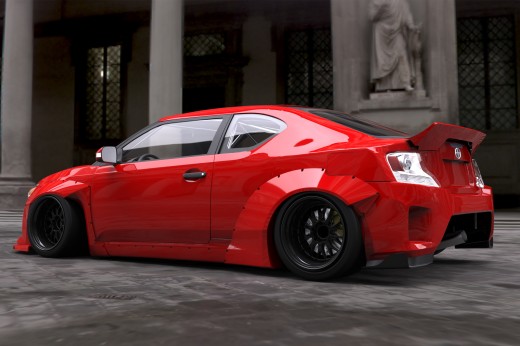 Thats not a Land Cruiser... thats a Sequoia

Whoa! That's a crazy ride! Lovin' the FWING! So FWunctional! Can't wait for the awad tC to rock the time attack world! I wana see it go to Tsukuba! Anyone else?

Ah, my mistake. Need to learn my land barges!

am I losing it or do I also remember chris building an awd scion xb? if thats not correct than I am crazy (no surprise). still loving the fwing

What about whp of drag car?

Hey I recognize that Rob guy from that old Hi Rev Tuners show on Speed!

that lead in shot makes that TC look like serious business!

Nearly 900hp in a FWD TC? Goddamn that is some ridiculous shit, and I love every single inch of it.

That's crazy mike!!! have a change to see the time attack tc. at the NSCRA in westpalm beach florida last year.fantastic car and workmanship.good luck to the world wide racing team

Hmm will that AWS TC be in the same class as the HKS Evo?it will be an interesting match up...good luck guys

and good luck to Mr Rado

thats the homie rob, congrats on your success. wheres that white civic at?

eat some evos for us!

That a pretty legit set up. I cant wait to check this thing out this year.

That a pretty legit set up. I cant wait to check this thing out this year.

If Rado runs a AWD tranny in his Scion, he won't stand a chance against SSE or AMS Performance.

Rado hasn't understood yet that hp is not everything in time attack.

Nice looking Dawg you got there...car is cool too

Alex - THANK YOU! haha. couldnt have said it better myself.

if you have this much money, why not just start a ALMS or rolex cup team?

You guys obviously don't know much about Rado. He already broke countless amounts of record with that tC and holds the record for the fastest FWD in the world. He knows how to drive and his team knows how to build award winning vehicles. Just wait till that AWD beast comes out.

To FlyingJ: like josh said If you knew Chris then you would know that WORLD Racing doesn't have disposable amounts of money, it all comes from the effort of the team and love the guys have for company. And just so you know Chris already is the only FWD that actually places up in the top times imagine what he could do if he had all four wheels to play with.

Indeed. Also Chris Rado has won two seasons of time attack with his tC. Winning those events while break records are testimonies to his skill as a driver.

Where does one acquire those awesome goggles?

Rado: can't wait to see some video of it on the track... And maybe be at an event your running.

Unlimited Class Racing ... what image springs to mind when I mention these words? Older people in the