My name is Steven Yankeh and I live in Maple Valley,
Washington. First of all, I just wanted to give my compliments to the
Speedhunters team for putting together what is definitely one of the freshest
car culture sites on the web. After seeing all of the Silvias being posted as
of late, I got to wondering when we'd be seeing some TE27 posts. I know there aren't
nearly as many TE27's around as there are Silvia's, but given that fact I felt
that it would make a post on them all that more interesting and a great way to
share some lesser know old school JDM flavor! 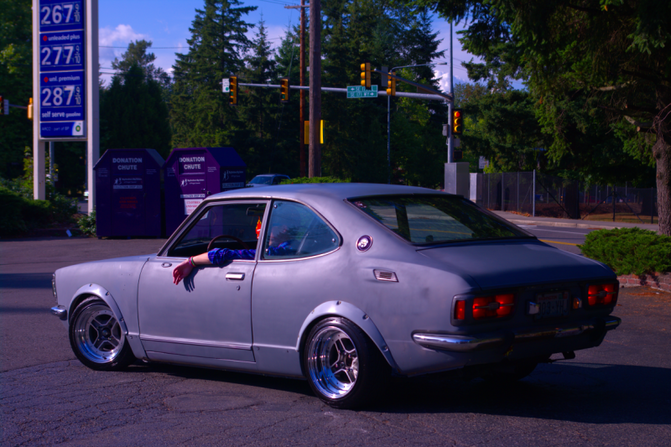 Pictured here is one of my current projects, a 1972 Toyota
Corolla Coupe. Currently however, it sits lowered on a set of 3 inch blocks behind
my house, and I'd rather not admit to how I went about lowering the front! The
hood still houses that original 2tc. It had initially come with a 2 speed auto
but I removed that and replace it with a 5 speed from a 1978 corolla wagon. I
used a clutch master from a 2002 WRX, a clutch slave from an 85 Celica GT-S,
and I also put in a clutch pedal made from scratch by yours truly! In addition
I also added a trans mount using a mix of original parts and parts from a John
Deere mower….don't ask. Parts are hard to find for these, so using what I had
around was my only option! 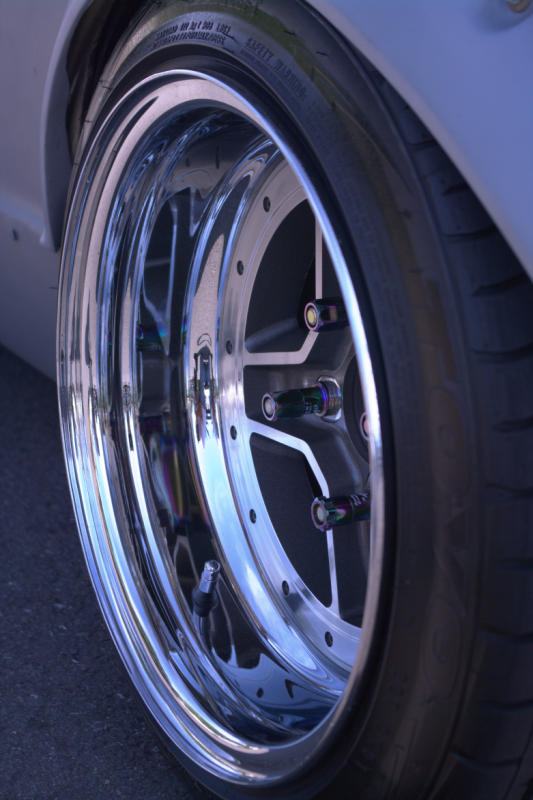 Looks great! Would love to see pics of your DIY work.

This has got to be one of the hottest te27s i've ever seen.

Great memories.use to have one of those.funny it burn to the ground on the highway to weeks later!!!!!

Gnarly little raodcar you got there, I totally love it. Nice to see a simply setup that looks "right" on those wheels, well done Sir. I wish there were more of these around, they are so much fun to drive the hell out of and you dont need triple digit speeds to feel like youre on the edge of craziness. Would love to have one all clean and simple for weekend boming around town and autox. cool writeup, glad to hear it all.

That is my favourite platform of all time. I hope to see more of this car soon.

Nice ride! For some reason, I want to see that thing chopped! That would be the ultimate sickness!

wow my pictures look like shit on here, yanks! get them speedhunter peeps to upload the newer ones!!

congrats on the feature brotato

yeah man that thing has flavor

I love these cars, and this one is really beautiful. John Deere parts? LOL! Hey, whatever gets the job done.

yanks! get speed hunters to post up the other pix i got instead!

and gas has stayed that cheap in washington

drop a rotor in it. ova here in nz its almost common place to do so lol. nice ride none the less.

NO! DONT DROP A ROTOR IN IT! every single oldskool corrolla in nz has a rotor in it. my cousin has three ke27s, none with rotors, and i swear they are the only ones in the country without.

love these cars! so fresh!

nice car there! should be nicer with front view attached.

How did you lower the front? haha just torch the springs?

Parts are getting hard to find, Just gotta make your own!

I should figure out how to make one of these blog thingys and post some pics of my mango.

those have to be the best 14" wheels i've seen!! and that car looks good too!

oh can we see more pics? I want to see it from the front and also the front wheel and tire close up plz.

Man I wish petrol was that cheap in NEwZealand!!!!!! Kool car by the way.

Reminds me of the ol' good times when my father owned this. Now, my father sent it to the scrapyard.

In the immortal words of Borat... 'GREAT SUCCESS!'

Hella jelous dog you know if you ever sell that car your callin me first. right onnn brotha

That thing is fire! I run through Maple Valley on occasion so hopefully I'll run into you. Would love to check it out up close.. and see where you put those John Deere parts! ~_^

Big Up to the Washington scene. This car is very cool. I love all the Original work, and the blood, sweat and tears you pour into your ride.