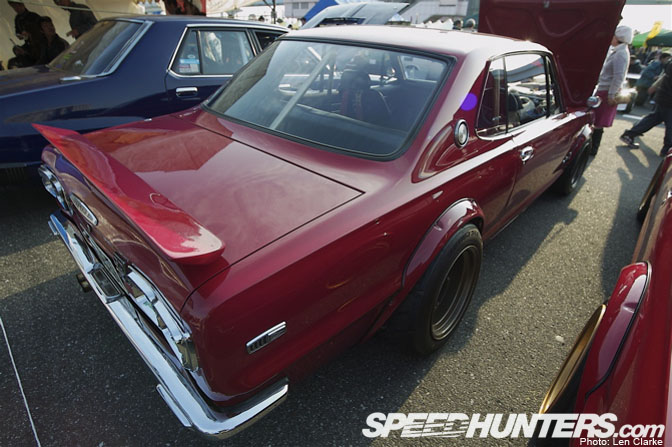 This past Sunday was the annual JCCA New Year Meeting, held as always in the heart of Tokyo’s Odaiba district in the middle of Tokyo Bay. Though smaller than last year, there was still a fascinating array very interesting cars – and of course a whole lot more. 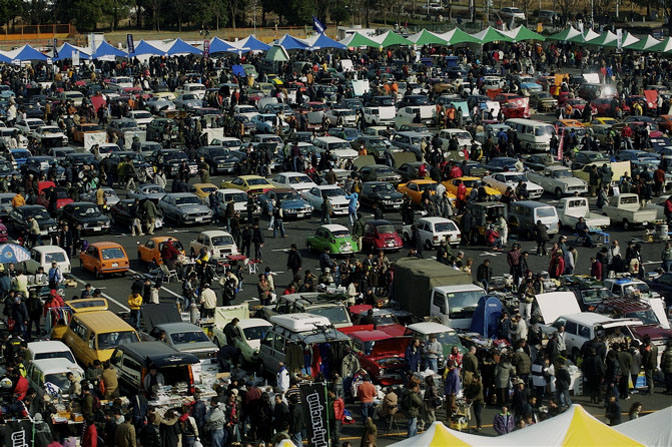 Arriving at the site, I was greeted by row upon row of Japanese classics, many of which were sold only domestically. For any diehard Japanese car fan this is a great day out; with all sorts of stuff you wouldn’t expect to see, as well as tons of iconic cars from the glory days of Japan’s automotive past… 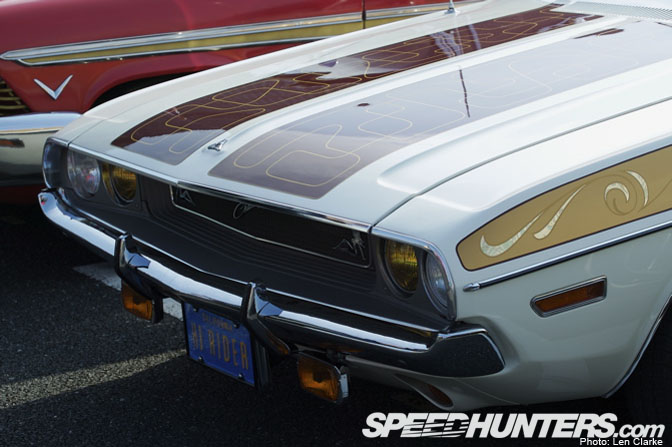 …but there’s a lot of just as offbeat stuff from overseas too…Check out this insanely well-kept ‘70s style street rod. It’s a 1970 Dodge Challenger and is an absolute timewarp – the condition is astounding! Plus, those yellow fog lights…

The New Year’s Meeting is as much an auto jumble/garage sale as it is
an exhibition of cars, and really has a down-to-earth feel.

Looking for hubcaps or trim for your ‘70s Datsun B210?

Or perhaps you’re in need of some insanely rare bits of kit for an early GT-R; well this is the place to look.

You never know what to expect, but there’s always something interesting. 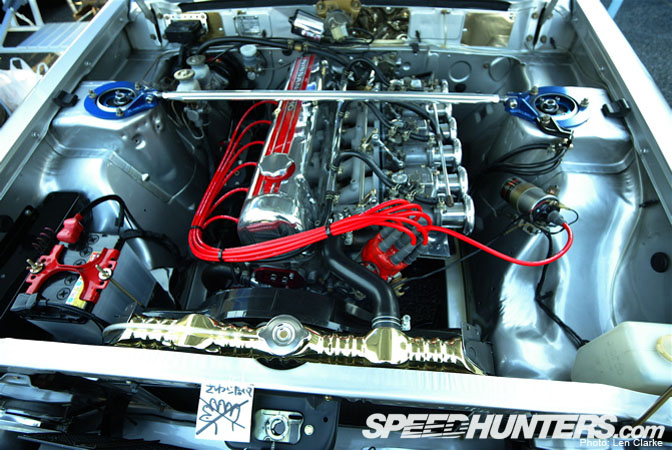 Loads of classic Japanese shapes, and Skylines of every model and era…

… including this pristine second-generation car.

Or how about this unmolested first generation Skyline 2000 GT? 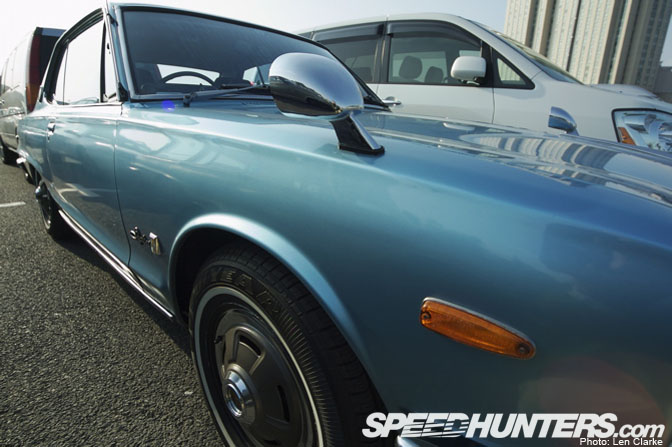 One of the many 1970s Toyota Corollas 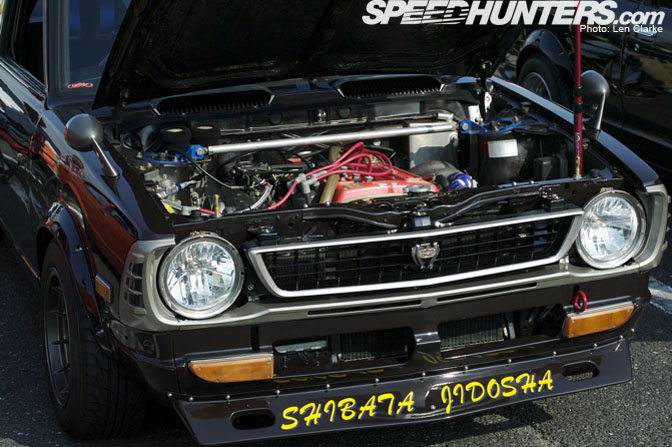 They bring back fantastic memories from what were great cars when they came out. 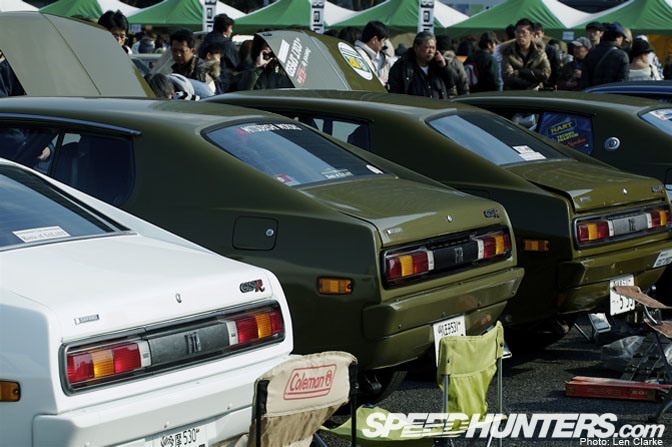 Here’s a trio of Mitsubishi FTO GS-Rs from the decade where the strangest colors were the best!

Another example of Mitsubishi’s styling cues from the ‘70s… 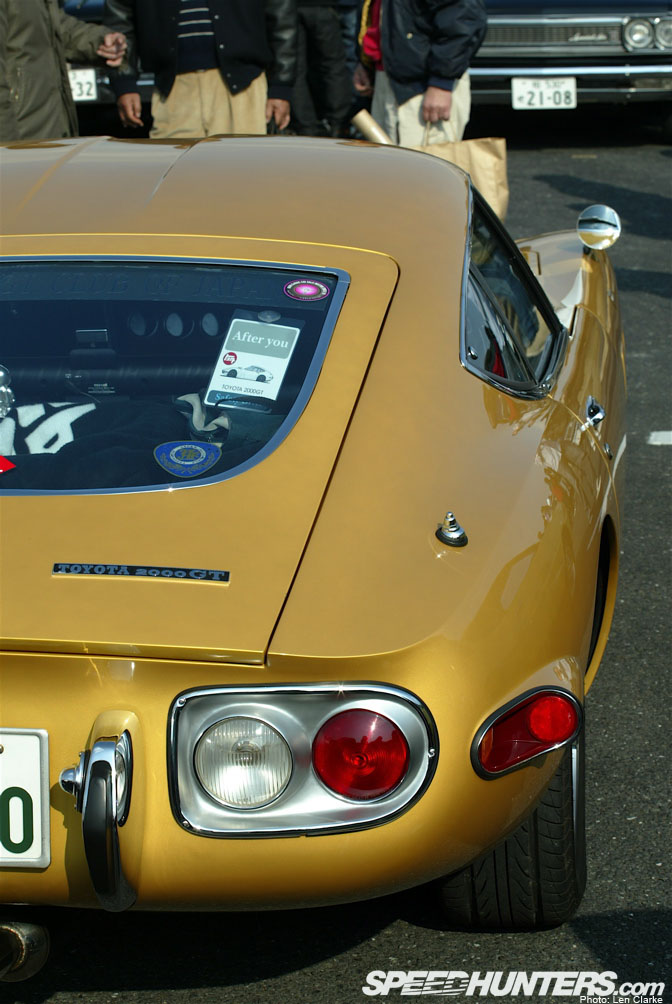 And of course no car event in Japan worth its salt would be complete without a Toyota 2000. Gold looks great in the sunshine. 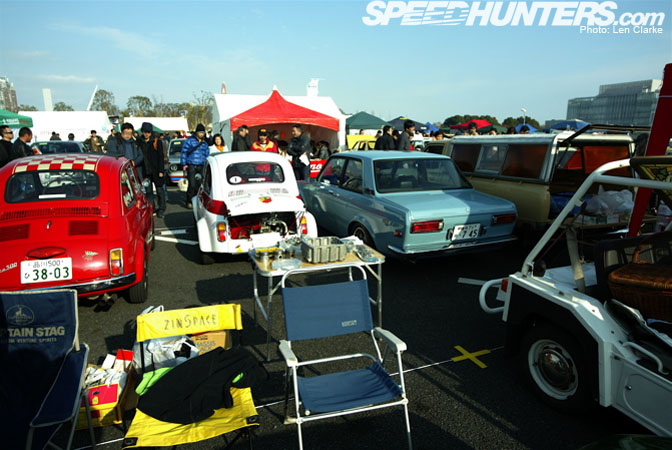 Japan is renowned for having rare and funky automotive stuff, and this meet is a great example. Comprised mainly of Japanese classics, there are also interesting British, French, Italian and American vehicles on hand.

This British-built Ginetta was a popular draw; immaculately prepared, it really wowed the crowds. 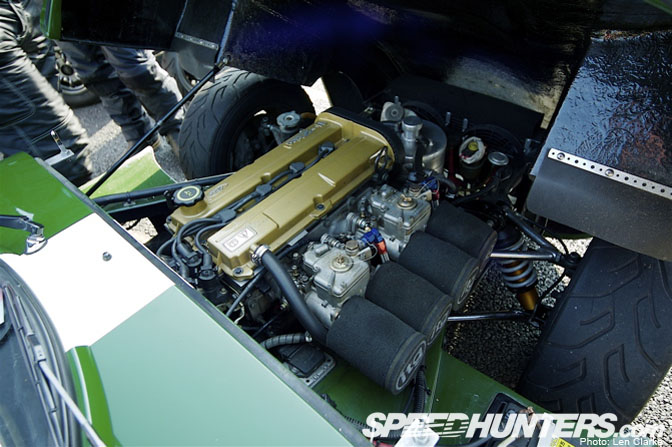 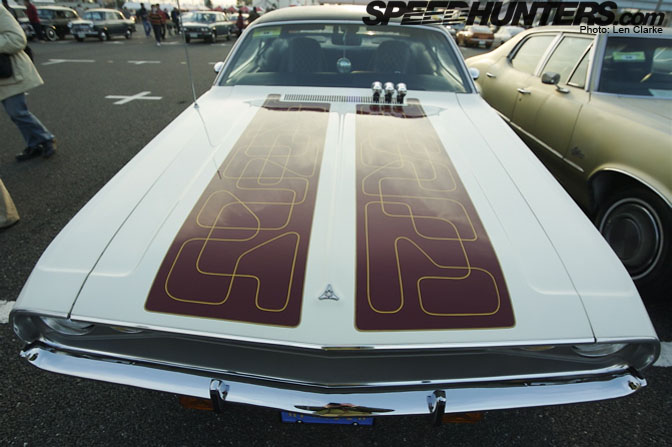 … everything from the paint scheme to the stickers, the Mickey Thompson tires – not forgetting the mirror ball and chromed chain steering wheel.

… and the brutally raised rear-end! 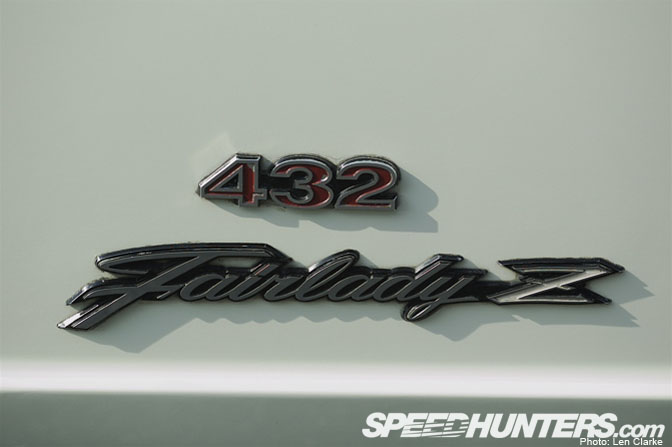 I ventured out to one of the adjacent parking lots, just to see what I could find. This pristine Fiat X19 sitting beside a pair of really wild Honda Vamos minitrucks is as clean as any I’ve ever seen, and dark blue is the perfect colour.

There was also an immaculate MGC GT V8…

…plus other cool stuff you’d be hard pressed to find on a Tokyo street. 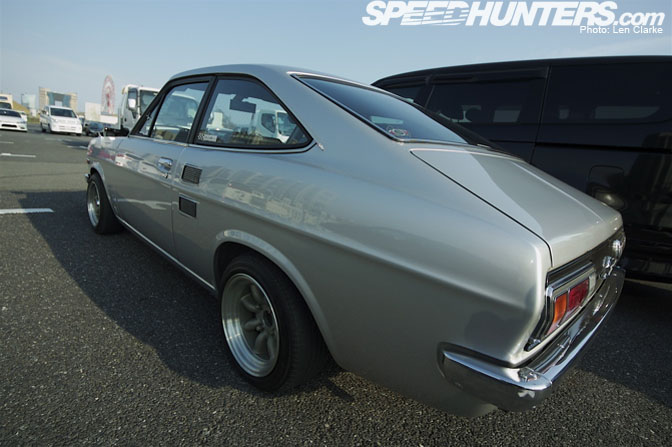 How about this 240Z or the silver Sunny! 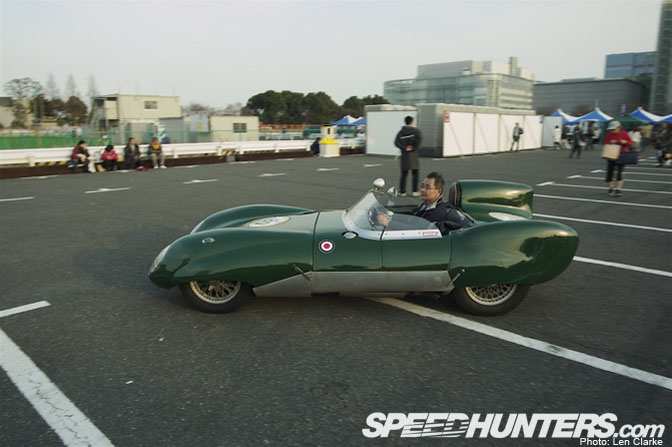 Check out this guy tooling around the parking lot in his immaculate Lotus Eleven – mad as snakes! 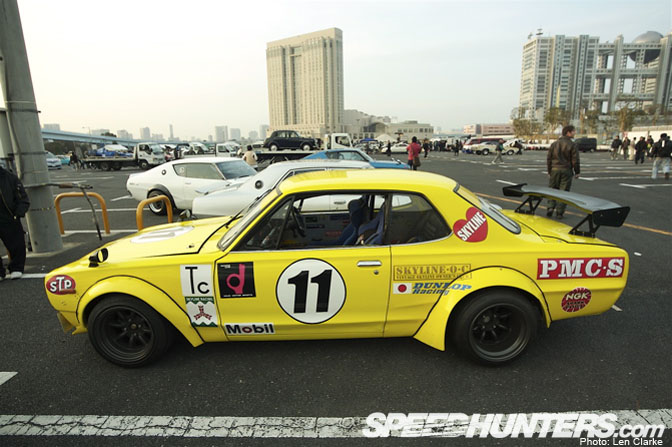 I'll leave you with a shot of this yellow Hakousha Skyline GT-R. More coverage of the New Year Meeting coming soon on Speedhunters!

A Day In The Life Of A Kaido Racer

That Lotus Eleven is awesome! Looks like something out of Ridge Racer 5!

I just know there were dozens of vintage Mazda badges that I missed out on buying.

excellent coverage; LOVE the challenger. so many beautiful cars there..

Thank you for a well covered event. Go Imports!

What was the theme this year? Who or what marque was the honored guest?

i gotta say a lot of these shots are far too tightly-cropped to fully appreciate the vehicles themselves... when you say things like "... including this pristine second-generation car." (referring to the kenmeri 2000GT-R) and all you offer is a view from the C-pillar to the front wheel, it's like you're teasing us... lol... this is more along the right lines

also, i really hate to keep complaining but if you're going to be taking photos of classic japanese cars, in japan no less, i'd at least expect that you'd know that the first-generation Skyline GT-R (KPGC10) is referred to as a Hakosuka ('Box Skyline'), not Hakousha ('Box Car'?). hopefully that was a typo.

all gripes aside, i'm glad there was coverage of the event this year what with Dino being otherwise occupied at HKS Premium Day.

it the essence of 'street cool', the Dodge is cool, i do like those early Corolla's too. Sweet

Good questions DINO?I wish you would have been their:-(

It was good to meet you at JCCA, nice coverage and hopefully Ill bump into you some time again. Cheers

wow! all the cars look like they just rolled out of the factory...

That Ginetta is way cool!

Wow, so many amazing classics. Thank you so much for sharing these. Excellent post.

Great set right here, thanks for posting them up

wow a real lotus XI. usually you only see the westfield replicas. great coverage! more pics of the MGB!

loving the classic jdm's!!! shame that there are almost non of these rolling around in the Netherland

As far as carshows go-those guys got guts-ill be damned if anyone parks that close to my classic-they need to be spread out more, offers show goers a better perspective

"including this pristine second-generation car." - the c110 was actually the fourth generation skyline.

"Or how about this unmolested first generation Skyline 2000 GT?" - c10 model was actually the third generation skyline.

Does nobody check speedhunters articles before posting them these days or are the mistakes just there to catch out geeks like me??

I'm glad I wasn't the only one who caught out the generation discrepancies whilst reading the entry. The 1st Gen. was the *LSI & S21, 2nd Gen. the S5*. Although the C10 is the 1st Gen. of "NISSAN" Skyline, it is most certainly not the First Generation Skyline.

I guess this makes me one of the geeks like kurisu.