So I was talking to Jeroen a while back and I mentioned my families new blog and he suggested I should write up some info and do something called a guest blog for Speedhunters. So I guess this is it, after seeing what was shown of Australian styling already I felt a tad ashamed that people might think we are a bunch of Ali G's with a spanner! I really don't know how to describe my family without coming out sounding weird as hell, I guess that's why it's taken me a couple of months to even get this far into it without deleting everything.

I guess giving a basic run down is in order. I come from a nuclear type family you know; Mum, Dad and two children. However we are nothing like the other families in my street I guess. You see my brother and I are a 3rd generation car builders. Most of my relatives are gear heads but my family live and breathe cars… yer even Mum. We come from Sydney, Australia.. that's right "Down Under" and no I don't have a pet Kangaroo but I've got a Dingo.

Some of my earliest memories of childhood is either driving around in my Mothers Red Chev C10 Pickup or working with my Dad on our 57 Chev 210, among motocross and BMX racing that's basically all my brother and I did. My father being a Supercross and Motocross rider eventually gave up racing competitively and fell into the car world after his first encounter with Vans. My Mum was more into going fast she had a bunch of Escorts and that she raced. Shortly after my Mum and Dad met they saw a cult car movie that was made here in Australia called Running on Empty, and it had a black 57 Chev 2 door. From that night my Dad was hooked and had to have one.

So long story short he ended up getting one, which was once a drag car from the 60's. It was  in real poor shape but he rebuilt it with only ¾ of the roof being original and untouched. The car basically served as the daily driver for years even bringing my brother  home from the Hospital. At this stage it was a pro street car running a 427 and a 9inch After  loosing a rear wheel  at top speed, driving to Northern Australia, the car was stripped down and  there  started a  4  year project to build my Dads dream car.

This car is probably the first car my brother and I ever worked on (if you can call it work). My Dad rebuilt the car from the ground up with a few tweaks here and there, such as converting it from 4 door to Suicide 2 door (a first for Australia) tilt front, smoothed and shaved everything, tubbed, reinforced and smoothed chassis finished in a show pro street look. This was my Dad's first time building a car to this  calibre  and  because  he came out of nowhere it was a little hard for the Judges of some of the big shows to comprehend  an  unknown builder constructing something like this in his backyard.

The car did the show scene for a while and was even sponsored by Kenwood Car Audio. The car did ok, and my Dad was ready to commit the car back to street duties after the Summernats Car Festival. However this is where things turned for the bad. Those that have heard or have attended the Summernats will know how out of control it can become, like a Woodstock for cars. After blowing a fuel pump on the Saturday night parade cruise that all top judged cars must do, the car had to get towed back to the loading area. However little to our knowledge the road was a riot and any car coming down this road was turned upon. The car was an utter mess every panel was damaged severely. We were devastated especially my father for obvious reasons, it was hard to watch such a joyful man be so upset.

After a month my Dad decided he wasn't backing down and the car was completely over hauled in secret over 11 months period. EVERYTHING was changed. New colour, new interior, new sponsors (Pioneer Car Audio and House of Kolor) etc. The car came back to the slaughterhouse called the Summernats (which is the biggest car show in Australia) and took out every award and destroyed the competition. The Car did the show scene for the year, winning many  awards  and featuring on the cover of the popular magazine "Street Machine" 3 times in a one year. The car was then sent to the USA, it did a number of shows and attended Shelby's 80th birthday, Alice Cooper rode in it and it attended the Barret Jackson Auction where it was sold.

By this stage I was 16 and started my own project. 1975 Chev C10 Pick up. Equipped with art work by both Extreme Designs and State of Art, Pioneer fully sponsored stereo and air bag suspension. The car got in the Top 60 at Summernats that year (youngest entrant to achieve this) and again the following year. I did a heap of shows all around Australia in it and even drove it to my Formal (Prom night) and any BMX race I had on. I now play with Japanese cars and have built a number of drift cars, and most recently my Sr20det power Toyota Trueno featuring a lot of custom work including homemade Fibreglass panels, custom made suspension bits allowing the car to drive the way I want it the car weighs a lot less than a stock ae86 weighing in at a little under 900kg it's a real fun.

Shortly after the sale of FAT57 the GTO Pontiac was getting re-released and my Dad got hooked up by AC Delco and got his hands on one of the first models. He spent the next 8 months building a Pro Street Show car out of the  2004   Pontiac GTO, equipped with more stereo then your local sound shop, a 427 Big Block, 380mm 8 spot PWR Brakes, custom made Intro wheels. The car was built as a inspirational piece for younger guys, to get them interested in building these type of cars. This car also went to the USA and was sold there.

Around this time my brother had started building a few cars at 16 he built a body dropped C10 pick up, and shortly after he went to the USA and came back with a 1931 A Model Pick up. Which he built into what some would call a period correct or Rat Rod styled rod. The car featured a worked 283 strapped to a Turbo 350 box with a Lokar shifter kit, dropped I-beam front axle, 9-inch diff with a air bagged rear end and a mean roof chop, the car has been in a tonne of magazines! Harley then needed a daily and after remembering a car that both he and I use to pass on our way to the BMX track as kids he slapped some cash down for the abounded 1964 Ford XM Delivery wagon, now featuring a four link rear end and custom rear clip, full air bag suspension and all paint work done by himself including the laced roof. This car gets some looks on his way to work as a third year Panel Beater.

This is a very vague and quick outline of things and in this time we have built many cars, I wrote this overview so when you check out our blog you will have some idea what we are about. Below I have include a large list of cars that we have built etc with a quick symphonist on them. For any more information please check out our blog Fat57 Customs where we update with any work we are currently working on and so on. Look out for us later this year as we will be over there maybe even with our new car. 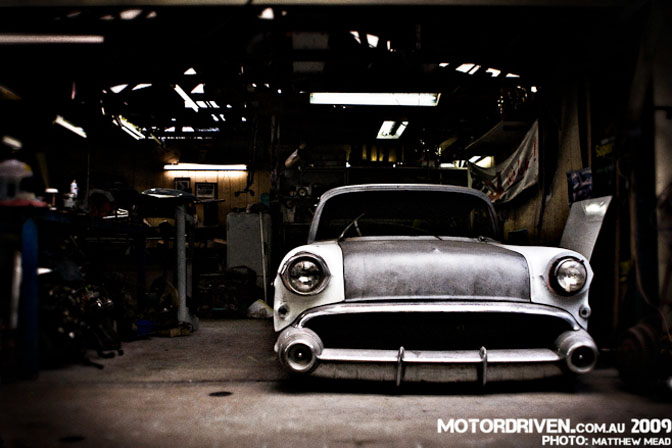 The Buick, still a work in progress.

Thanks for reading and maybe you will find some of our new projects that we are currently building right here on Speedhunters.

Its so sick to see gearheads branching out to so many styles at once. Mad props for holding it down in Australia..

Your family doing amazing work! Can't wait to see the buick when its finished.

I remember seeing your C10 in an aussie performance car mag years ago....nice to see your latest stuff.

Your cars are rad as hell but the only one I want is your transporter.

Nice one...your hauler is teh bizness

i've seen their stuff before, their COE is just amazing, and I've been following that buick's build-up...and I can't wait to see it finished!

The last pic is awesome!

Your my boy Beauy! lol

I want the car hauler. So sick.

Wow man you got an awesome family. Its cool that your car passion was inspired by your parents. I love your rides too especially the hauler.

the orange gto is nice man

Cool story man, i've seen some of your stuff before - the COE is super cool. That last pic of the Buick is brilliant............wallpaper?

dude....i so wish i could trade LIVES with you rite now...im so pumped up to just get my car now instead of waiting until im 18. your family knows how to live it up; much respect!

Last pic should be a desktop!

Also loving the 57 chevy, allways dreamt of owning one!

That rat is siiiiiiiiiiiick, + best transporter EVER.

nice mix of "domestic" and imports. nicely done up AE86.

When your family has been building world class cars for three generations, certain expectations are placed on your shoulders. While Beauman Jones's SR20-powered AE86 is the polar opposite to his father's flawless 57 Chev, I think it's fair

Before we had even landed in Sydney, there was one place that we had underlined as a must-visit. The

I still remember seeing Fat57 in irymple as a kid, I was amazed it had come so far for the car show! Have loved it ever since.
Was a shame I didn't see you guys run a chopped this year!