How many of us were taken through the streets of childhood in a minivan?  I was, and I hated it, I couldn’t dare be seen in it.  At the tender age of six my family bought a 1993 Mazda MPV and used it for everything from towing the boat to shuttling our stuff across the border during our move from Canada to the States.  Ten years later when I got my driver’s license, there was no doubt in anyone’s mind that I would inherit the dreaded minivan…

This was all fine and dandy till I reached the tender age of 18.  At this point all I wanted to do was go faster.  But how was this possible in a minivan?  I looked into other cars, but realized that I had fallen into a love affair with the minivan and could never get rid of it.  I researched options for turbocharging and supercharging, but nothing came up.  I realized that whatever I did would be a total custom one-off job. 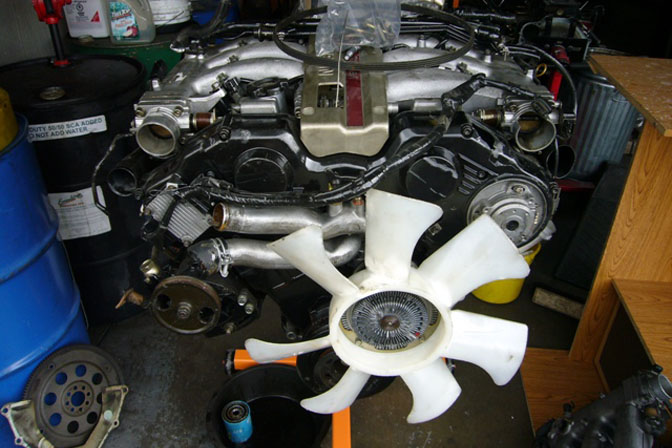 During the summer before College, my dad discovered a local JDM motor shop.  Looking around feeling like a kid in a candy store, and armed with our hands as tape measures, we thought about keeping it Mazda, but didn’t like the options.  Looked at the inline six’s, but they would require too much fabrication.  We settled on a VG30DETT which seemed like it would fit and had turbos with no shaft play.  So we bought it, and started stockpiling other parts to make the swap possible. 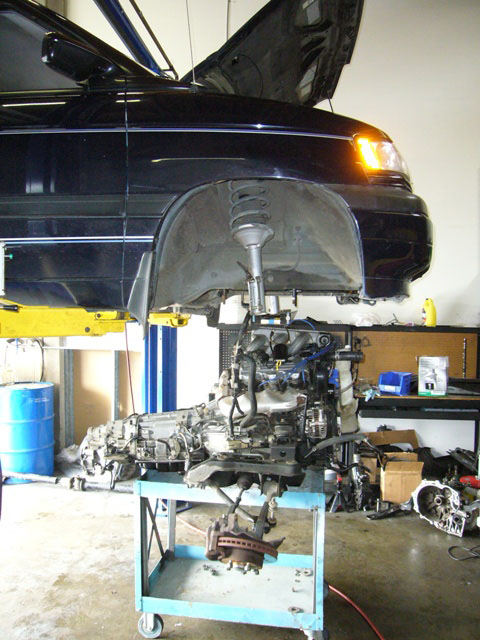 After cutting the MPV’s wiring harness with a bolt cutter, I knew there was no turning back.  The VG took up so much room that conventional methods of installation were not going to cut it.  I even had to swap out the column shifter for a floor shifter from the 300ZX since there was interference between the linkage and the motor. 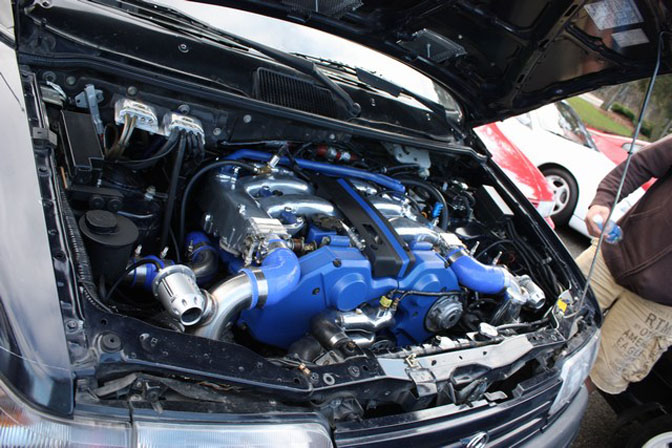 But before I knew it everything was torn out and the VG fit like a glove even using the same engine mounting points as the stock JE.

Working all summer I successfully completed the swap with so much customization that I can truly say there is no bolt or screw which I have not touched and no wires I haven’t soldered or replaced.  When all was said in done, the horsepower of the MPV jumped from 103 to 388!! 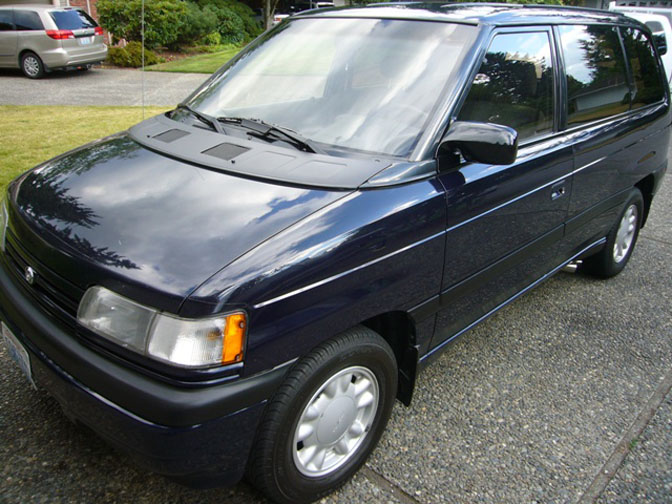 From this point on, my love affair with the MPV has flourished into a need for speed, and sent me on a mission to make a name for minivan’s everywhere.  I have never owned a performance car, but in creating my own it has given me a true appreciation for automobiles. 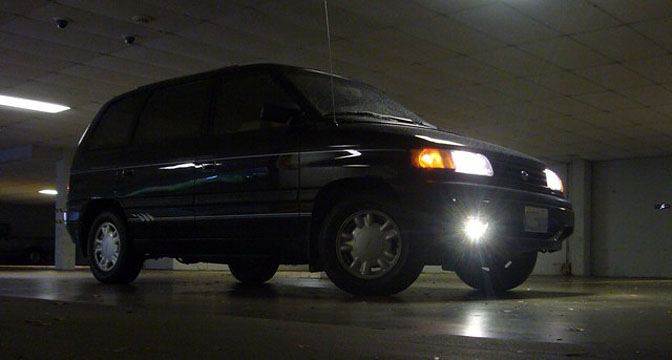 Keeping the body stock has allowed my van to achieve a nickname among fellow enthusiasts as “The Ultimate Sleeper” pissing off Viper owners at the strip, and Skyline owners at local car shows here in the Northwest.  Since this project appears to have no end in sight, I continue to stockpile parts to add to my crazy creation. 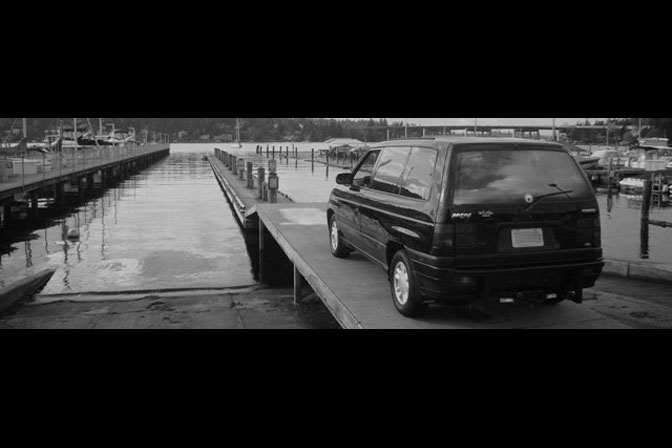 That is simply sick.

SICK. Love this, also check out http://www.turbominivan.com, for some Mopar/Shelby Turbo Minivan goodness. I myself rock a 95 S6 Avant, which at 250hp and a boring exterior is pretty stealthy, but that is WAY stealthier. Super cool man, much cooler than the typical silvia or 350Z crap.

I think you're absolutely crazy...but I love it...

Seriously cool, one of the coolest sleepers I've seen in a while

Y34H!!! Keep it visually stock! Great! I'm fond of the sleeper philosophy, but the suby legacy of my dreams looks like a war machine next to your trap!!! Congratulations!

Simply insane ! I love it.

Insane. I love sleepers! How awesome would a Mazdaspeed 5 be?

Simply an amazing sleeper. Use to ride in one during my childhood and couldn't imagine riding in this beast.

Whenever I think I've seen the ultimate Q-Ship, another one comes along to blow it out of the water. That thing is COMPLETELY inconspicuious.

you are crazy sir

a rotory would be way to obvious in sound. no sleepin near a rotory. i wanna see action shots! ACTION SHOTS!!!!! spin thos rears!!!! (would like to see it lowered a bit, but not slammed)

damn. truly unique. What is it like traction wise? lol.

im sorry but this is a good job on the custom work but really man, why did you drop a motor like this into a minivan like that, a little too ridiculous for my likings, good work though. i can apreciate the custom work and the determination to stand out

i think it would be scary to turn a corner in.

I love when people build outright sleepers that make a financially sound showroom purchase of equal performance seem too dull.

a.k.a. "The One Wheel Peel" open diffs suck

haha it made me laugh

but i'll give you credits for it!

that minivan will be blazing!

wow, this was like my childhood ride....now on steiroids! madness!!!!

Coolest MPV of all time.

What does this thing run of the 1/4 mile?

You should put that monster in a little car man

nbut is a nice job

You right it is the ultimate sleeper.you don't "how much i gould love to take that one to the street races" all the fools money i can make!!!!

this could be epic if you lower it with some good suspension and throw some jdm wheels on it.. otherwise if it remains a "sleeper" it will remain a unknown and people will forget about it.

Am sure there wont be a shortage of customers

Why do this when you could just buy a Miata or something. And those wheels are nowhere near hellaflush. Omg noobs and theyre poor fitment

dude, i wish i could shake your hand. thats fucking awesome

That is down right awesome!!!!! I demand more of this MPV! Truly a great van!

I love this van!

I remember the first time he opened it up for me, what a rush!

And his speakers beat hard!

i love the haters who think they know how you should have done things better than you. Its as if they think you are unaware of the existence of a miata, and must inform you that you've made a grave error in judgement! oh noes! the wheels arn't hellaflush on the van that intentionally looks stock! they must not know what they are doing!

awesome project, hope you keep pushing the limits of that chassis!

i remember the first time i heard your bovs. everyone had to scrape their jaws off the ground lol

you are the hero of speedhunters.

none of this rice, HELLAflush nonesence

i saw pictures of this a while back.

i'd love to have one whenever i become a father haha

Nice job! Are you up in the Pacific Northwest? I love this car, its people like you that keep our movement going. Bean Dip... Your comment just makes me laugh. Hellaflush is a website, not an adjective...

Is this front wheel drive??? If it is - correct me if I'm wrong - it has more HP than a Ford Focus RS!

Haha, I saw this thing in person at Golden Gardens in Seattle(7th pic) . Probably the coolest car there... besides the Starions of course... LOL... jk. You HAVE to take some vids of this thing.

YEAH!!!!! REPRESENT THE PNW SLEEPERS!!!! I nearly woke up my entire house when I saw the license plate! Can't wait to see this thing in person. Maddeningly bonkers!

That is an awesome swap! I would love to see that on the strip.

That gives the word sleeper a new meaning... Glad to see someone thinking way out of the box, er, should I say way into the box. Enjoy You Turbo MPV !! Nice work

what a glorious swap!! just totally unconventional and balls out awesome. have you looked into swapping rx7 parts (diff and suspension/brakes)? from what i recall the control arms are the same, so the ball joints would probably hold the knuckles.

that is a true sleeper love it !

Years ago, at Englishtown, I ran across a '71 Dodge Dart Swinger that looked clean and stock--no body mods, no hood scoop, whitewall tires and body-color steelies with red-stripe dogdish hubcaps.

Under the hood was a 440 Magnum. The only external clue that anything was up was the dual exhaust, which could just as easily have been on a 318 car.

I say well done, sir, and have fun with it!

amazing! and a true sleeper. the only over mod you could do is put some coils or bags and lower it!

At first I was thinking ....wtf.....but after reading and seeing you have 388HP!!!!! I can't help but smile knowing that that thing packs that much heat. It must be really entertaining blowing the doors off unsuspecting victims.

Keep it a sleeper. Don't do anything to the exterior that hints at anything out of the ordinary. I feel anything radical on the exterior would just come off tacky, especially on an MPV!

Now that's amazing, what a work! Can't help but feeling that the engine would suit it's original car better though.

such a beautiful motor on such an ugly chassis.. imho

"such a beautiful motor on such an ugly chassis.. imho"

FWIW- that generation MPV was initially praised for its good handling and road manners (compared to other minivans of the time). So the chassis probably has some potential.

This is Inspirational, I inherited my MPV too.

so rad. I've wanted to do a rotary swapped one for a while now.

I love this car!!

Definitely get those Mike Smith manifolds, I used to work with him before my current gig. He puts so much love and attention into each set of mani's..