Twenty Years………….roughly a third of most people's adult life and yet it seems to have flashed by in the twinkling of an eye. Back in 1990 I had just left the advertising world and was working in Covent Garden for a design agency, we were so hip and so cutting edge or so we thought. Actually it was pretty good time for me, I seem to recall getting a new company car early in the year, a convertable 325 BMW, leather, flash wheels, The Full Monty. The pay and perks were pretty good too, so how did I end up scratching a living in the lower levels of motorsport? Be careful of what you wish for is the warning that comes on that particular tin.

On the World stage it was a time of optimism and hope. The Berlin Wall had fallen, symbolising the collapse of the Soviet Empire in Eastern Europe and the Cold War was at an end. Things must get better,  McDonalds had opened in Moscow  and the Romanians had even shot Nicolae Ceausescu, for once a leader getting the kind of justice they deserved. Apartheid was about to end and despite the massacre in Tiananmen Square it was thought that the Communists there would be toppled too. It looked as if the final decade of the deeply troubled 20th Century would redress some of the horrors of the preceeding 90 years. Lord knows it needed to.

The internet, now an integral part of our lives, had been around for 20 years or so but it was now gaining a public face with the World Wide Web Project, nothing would be the same. Which is how I come to write for you these days.

Those of you still with me must be wondering what the Old Boy is on about now.

I suspect the majority of the readers of SpeedHunters regard Jaguar cars, if they think about them at all, as sort of wanna be BMWs, Audis or Lexus. No real performance edge to them, no buzz, luxury barges but 20 years ago Jaguar were right at the top of the sportscar and motorsport tree. During the 50's Jaguar were almost unbeatable at Le Mans and after falling sick with the malaise that virtually destroyed the car industry in the UK, the company began to thrive once again in the late 80's. One symbol of this new found vigor was the sportscar programme that saw Jaguar race and win on both side of the Atlantic.

They entrusted their racing programme to Tom Walkinshaw Racing (TWR) who set up a team in the UK to contest the Group C Championship and also a base at Valparaiso, Indiana to race in IMSA. A legend was born and the Silk Cut sponsored racers developed a fanatical following, especially at La Sarthe.

The assignment's results was a success by any standards and a cost effective one at that, as TWR had but a fraction of the budgets available to Mercedes Benz, Toyota or Nissan who were their competition back then.  A World Championship in 1987 was followed by a Le Mans win in 1988 and another World title. Over the Atlantic instant status was achieved in 1988 by winning the Daytona 24 Hours at the start of the first year of that project. 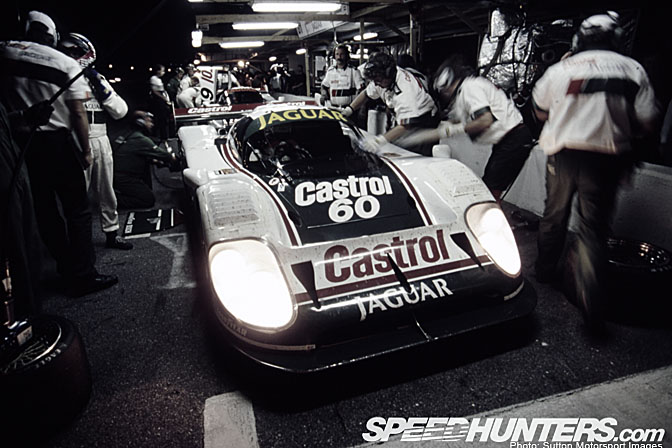 However it was clear that the V12 powered Jaguars would struggle in North America against the Nissan turbo outfit of Electramotive/Nissan Performance Technology Incorporated. Sure they had bigger budgets but NPTI were top line engineers who designed and built a car specifically for the IMSA series. The Jaguars were the answer to another problem, that of winning Le Mans. Time to get creative.

I wrote a piece recently about Bernie and Brabham, who were in my opinion, a bunch of pirates. If anyone else deserved to be similarly classified it would be Tony Dowe, who back in 1990 was the head of TWR U.S. Tony was also a maverick who would do things his way, sometimes just for the hell of it.

For the 1990 IMSA season the Jaguars would be powered by V6 turbos, the package being better suited to the nature of the tracks that made up the calendar, with the exception of the two Blue Riband events that opened the season, Daytona and Sebring.

Here the reliability of the V12 would make up for any speed deficiency against the Nissans or so TWR hoped.

As the Daytona 24 Hours is coming next weekend and I have little or nothing to say about the current cars I thought I would give TD a call and see what he remembered.

As ever he is good for a quote.

"The catalyst for the victories at Daytona and later in the year at Le Mans was the awful performance in 1989 in France. The whole thing seemed to be an economy run, perhaps to fund the development of the turbo powered cars.
I was determined that we were going to win at Le Mans in 1990 and this led to the development of our own aero package. Kidlington (TWR HQ) tended to look down their noses at our solutions but later adopted the design themselves." 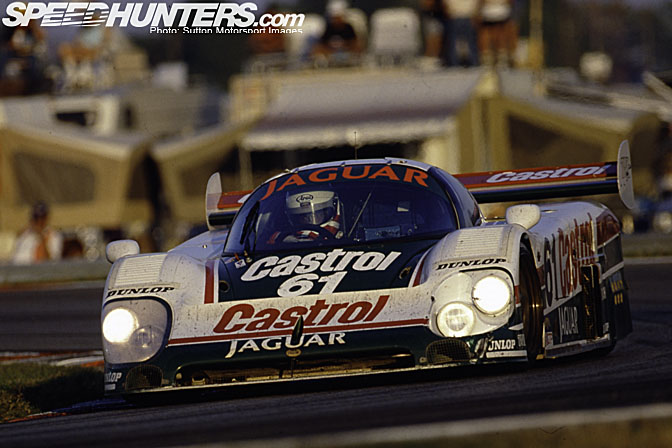 "I calculated that the distance from the point at NASCAR Turn One, Daytona where the infield course rejoins the banking to the Bus Stop Chicane at NASCAR Turn Three would be much the same as the run from Terte Rouge on the Mulsanne Straight to the then new first chicane. So get the aero package working well at Daytona and we would be well set for June."

"For once we were not getting any "help" from Kidlington(TWR UK HQ), so using the data that we had acquired we changed the engine cover without interference. We put NACA ducts on the side and took the huge scoop off the top that was also screwing up the rear wing."

"However the first time we ran the new configuration it didn't go very well, it didn't make any difference. The mechanics had put wire mesh into the ducts to stop crap getting into the engine bay. Then I remembered Tony Southgate (the original designer) telling me that NACA ducts had to be clear of any obstruction, so I had the boys take the mesh out and the motor immediately came to life."

"We also had a strategy that involved racing both cars against each the whole time. There is some footage of Brundle and Lammers that shows them flat out, coming off the banking absolutely cutting each other up, side by side, absolutely fabulous. It was the best fun, it really was. We knew that would have to do this at Le Mans to win, so we had to know how fast we could really go." 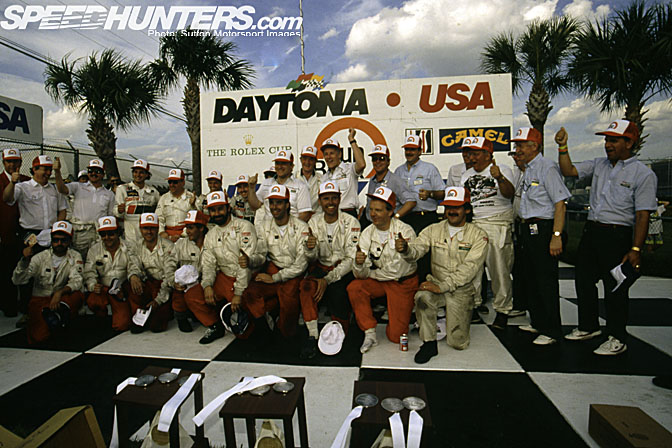 "Perhaps the biggest change were some very special one piece (Billet) brake calipers that Ian Reed had designed and we had built here in Atlanta. They were made to accept a much thicker brake pad than standard, Performance Friction made the pads for us. So now we could also go further than the UK cousins without a pad change. We had also had “Rabbit” (A legendary fabricator who still lives in the Georgia mountains) build us some really trick pad changing tools." 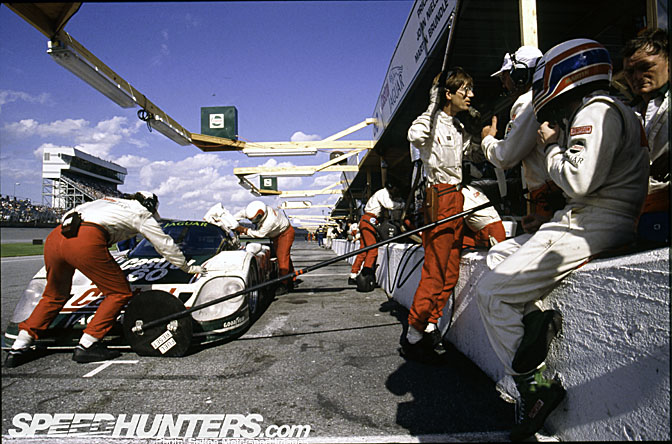 "We also really worked on our pit stops. The guys were always practicing plus the racing and the testing never seemed to stop. Remember there were no pit lane speed limits back then so the likes of Brundle and Lammers were absolutely mega into the pits and we worked very hard on identification of where we were in the pit lane, basically all the things that are taken for granted now."

TWR and Jaguar arrived in Florida early in 1990 in a confident mood, sure they would not be the absolute fastest but their total package was better than the opposition. Nissan were undergoing a transformation from Electramotive to NPTI, the best years of the Porsche 962 had passed so there was a definite opportunity.

Another change from the previous season was the switch to Goodyear tyres from Dunlop. The experience gained running in Daytona would prove invaluable months later in France. The race got underway and right from the off it would have appeared that the opposition was determined to give the race to the TWR gang. Certainly the Porsches' challenge was over alamost before it began. Oscar Larrauri and Derek Bell both put their 962s on their roof as a result of left rear tyre failure at over 200mph, both were lucky to walk away unhurt.

Nissan, although fast, also had their share of problems. First #83 ran out of fuel while still short of the pits then Derek Daly's #84 caught fire while refuelling. Although the blaze was quickly dealt with, the clean up delayed the car substantially. During the night both cars retired with engine failure, a season's worth of problems in one race.

In the rising temperatures of the Sunday Morning and early afternoon both Jaguars hit overheating problems. The cooling system was flushed out on both cars and a mixture of water and radiator sealant boiled up in the team's tea urn rescued the situation. The storm was weathered and as all opposition had disappeared during the hours of darkness, the Cats could cruise on to victory.

The winning trio of drivers, Davy Jones, Jan Lammers and Andy Wallace covered a total of 761 laps in their Jaguar XJR-12 or 2,709 miles.

It was the first 1-2 finish at the Florida classic for over 20 years and uniquely the same chassis would go on to win Le Mans later that year.

That is a story for another day and indeed I will be bringing it to you nearer the time of Le Mans.

The victory was well timed in a corporate sense too as Ford had just acquired Jaguar and this seemed to cement the relationship.

Tony Dowe and his TWR Buccaneers had soundly thrashed the opposition, even some twenty years on it is some achievement.

At the Jaguar driving event for XKR and XFR, Davy jones was one of our instructors.

Great write up! More on the mysterious guru known as 'Rabbit..

"As the Daytona 24 Hours is coming next weekend and I have little or nothing to say about the current cars..."

Haha. That's why we love you John!

cool! There is a great GTP website which follows this era. http://www.grandtouringprototype.com

Excellent work once more Brooksie, watched the DVD review of Le Mans 1990 today and it is fair to say, that once the Nissan UK effort had faltered it was a relatively easy run for Jaguar

Thank you for this article. The XJR-12 and the XJR-9 are definetly two of my favourite Group C race cars.

Nice write up! Hopefully Jaguar will resurrect their motorsports program starting with their XKR GT2.

Great retrospective! Makes me proud to be British! Even if Jag is owned by Tata now lol!

Rabbit's still around here (Atlanta) and can usually be found in the general vicinity of Jim Downing's place...

I wanna know more about Rabbit and the people that made it happen in America.

brilliant article, thats some history that chassis has in 24hr races.