Another week another Show, this time I got up before I went to bed to jump on the first Eurostar to Paris and onto the 2010 Retromobile.

What a contrast to the gruesome NEC and not just the Show itself. Alighting from the cab at Porte de Versailles the scene could not more different from the horrors of the charmless Birmingham. The cast was not made up of the dog eared and shop worn UK motorsport fraternity but instead there were legions of tall, slim young women. Everywhere you looked there were leggy blondes, some of them even natural. Were there any young women left in Eastern Europe we mused?  On first impressions the Retromobile was going to be REAL fun, but at the back of my mind there was a niggle, this crowd did not look like they cared about the difference between a Bugatti and a bycycle.

There was a sense of deju vu, I had been in this dream sequence before…………….then as the escalator carried us deeper into the bowels of the building the answer became apparent. The beautiful people all turned left, while the likes of me were encouraged to filter right………….ah, Prêt-à-Porter, Paris and that was the end of the glamour show. The Fashionistas were having their own event on the first two floors, I was off to look at cars not stars………..the sacrifices one makes for one's art……………..

Once inside Hall 7.3 the first thing that hit me was the Mazda stand. The World's favourite Rotarians will be 90 years old this year so to celebrate there will be several features on this great company.

The Show was a combination of sublime to ridiculous, high art to tat, expensive to economy. But it had a vitality, a sense of elan that the French bring to any activity they collectively engage in and that was a quality wholly absent from the Autosport Show's tired formula.

Perhaps as good a barometer of the level of these kind of shows is look at the peripheral stuff for sale; books, magazines and scale models, old and new abound but I think it is the bizarre and strange that gives events such as the Retromobile their spice. OK Ruebens in a 2009 Brawn, €38? Seems expensive compared with a Michael Schumacher (I Presume) key ring, imagine the reaction at a swingers' party when that set of keys was lobbed into the bowl………..or maybe not.

Horologists, even the petrol head variety, might struggle with these fine timepieces.

Film posters…..hmmmm, Steve McQueen and Le Mans I can see but L'Esibizionista? This appears to be Italian for exhibitionism or flashing, an odd translation of The Honkers an everyday tale of  an over-the-hill rodeo champion is so self-centered that he ignores his wife, son, and best friend or so the blurb goes. A James Coburn connection to cars could be that he liked and owned Ferraris…..who knows?

Another set of oddities was a load of record album (how we got music before tapes and cds) sleeves pinned up to a wall with various car related themes……………this gem took my eye, Raymond Lefevre strutting his funky poulet with faux Charlie's Angels and an early Gremlin, all camply redeemed by a stirring rendition of Johnny Hallyday's classic,  Derrière l'Amour…………………..

What show would be complete without scale models? Some stalls are presented better than others, this one resembles a wrecking yard with a Lamborghini sitting cheek by jowl with a Big Yellow Taxi and a fleet of Camions des Pompiers. 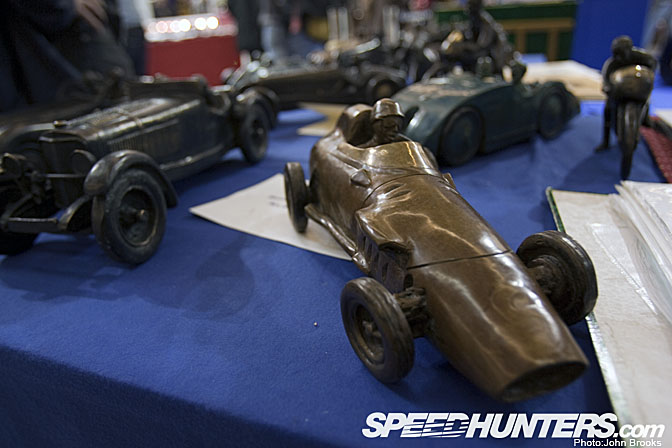 Much more elegant are these large scale brass and metal efforts.

And a mini traffic jam for Ferraris.

Elegance is the name of the game when it comes to this beautiful flying boat, one piece of metal with chrome engines.

More power and grace from both the sculpture and the three dimensional painting of a Group C Jaguar.

Away from such refinements is the auto jumble side of the show, somewhere in this pile of junk is one man's gold.

It is very green, in the real sense of the word, to recycle everything such as these old doors and radiators. In case you think all this junk is worthless, at the Bonhams Auction during the Retromobile the rescued remains of a Bugatti chassis that had sat at the bottom of Lake Maggiore for over 70 years was sold, for $368,320………..

And in the final analysis, it is all about the cars, keeping these wonderful works of automotive art alive. The unique Nardi Danese Alfa Romeo was built to order just after WWll and raced in endurance events such as the Targa Florio and Mille Migla. In the background is one of the wonders of the automotive world, the Bugatti Royale.

The Type 41 Bugatti was a monster, as big as truck and  built between the wars. Only 6 of the scheduled 25 production run were finished, I understand that the above car is almost genuine, well sort of. The late Tom Wheatcroft, owner of Donington circuit and museum, commissioned an exact replica of the first car, Coupe Napoleon. It is a genuinely imposing vehicle and experts would struggle to tell the difference from one of the original six.

This leviathan, La Balaine (whale) was the creation of famed designer of cars and locomotives, Paul Arzens. It is an art deco styled two seater based on a Buick, dating from 1938.

Still with power to shock, a Lamborghini Countach.

Another beauty from the 30's the Peugeot 602 Eclipse.

Fast forward to the 50s to the prototype of the Mercedes Benz 300SL.

Leap another two decades and there is this gold Citroen SM, a real classic. The intriguing sounding Euro SM Club is something you join as an owner, not something you might watch late at night on a special pay TV channel.

The Mazda Cosmo 110S was the first of the rotary cars, more on this gem later.

The car auction houses were out in force, collections everywhere.

Competition cars were also out en masse, a historic rallying NSU Prinz was a neat example.

A bit of a contrast, the Renault RS10.

It could only come from Italy, the Alfa Romeo C52 Disco Volante Spider, something for ET to drive home in?

From Italian style to an Italian Muscle car, the Ferrari 512 BB LM.

And living somewhere in the middle of those two extremes, a Lancia Stratos.

Classic livery, classic shape but probably not a classic car. My colleagues cast doubt on the authenticity of the Porsche 935, it did not worry me at all.

Perhaps the best solution I saw all day to the problems of the fiesty Parisian traffic, you really could be Dirty Harry in this Sherman.

The Retromobile 2010 had a typically French mix of class, style and flair. I'll be back next year.

That Silk Cut Jaguar painting is f-ing awesome! I would love to get a print(s) of that.

Thank you for being informative, brief and funny while retaining decent grammar and spelling. Can you give Dino some lessons?

Just a quick correction, the cosmo 110S was the first Mazda rotary car but the first production rotary cars were by NSU, the Ro80 and the Wankel Spider. I almost bought an Ro80 a few years back but it got sold from under me

I´ll go to see http://www.classicautomadrid.com/ES/2010/ the next week in Madrid (Spain). There will be another saloon in Madrid in May. http://www.retromovil.com/esp/principal/index.php

Love to have been there, just for a good poke around, and to photo that Lancia Stratos & the Mercedes Benz 300SL & the Ferrari 512 BB LM! You would end buying some the 'peripheral stuff' only for it to re-appear a few years later in roughly the same environment (LOL)

Very good report, and fabulous pictures. That "Gremlin" of Raymond LeFevre is actually a Pacer, though. Clearly not in your normal area of classics.

I must get to this show sometime..

@ninja>pirate....I doubt if could teach any of the others, I am the one still learning

@Neil Mac.......yes I have had a few pointing out another of my mistakes, AMC is not on my agenda and yes you should get to the Show