Regular Speedhunters will be aware from our preview last week that the Intercontinental Rally Challenge started its season last week with the Monte Carlo Rally.

It was a dominant and quite surprising win from Mikko Hirvonen in the all new Ford Fiesta S2000. 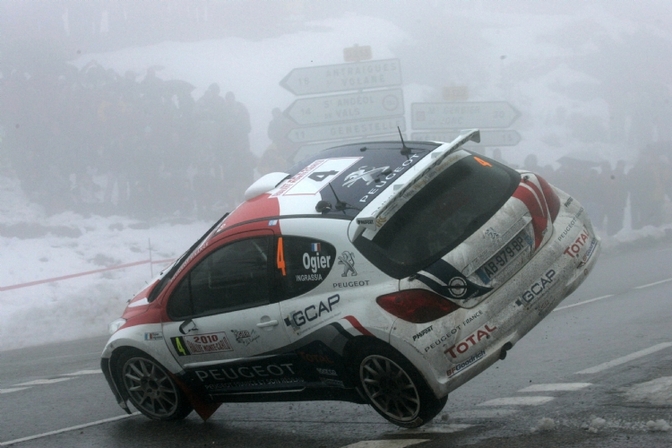 Hirvonen led from the start from Skoda’s Juho Hanninen. Peugeot followed closely with last year’s winner, Sebastien Ogier (above!) and Stephane Sarrazin and Kris Meeke in hot pursuit. One of the favourites, Jan Kopecky had a dire start losing four minutes on the very first stage with a Puncture.

As Day One continued, Hirvonen continued to extend his lead as the Peugeots had highs and lows. Sarrazin moving up to second, while team mate Ogier, delayed when the Frenchman damaged a wheel after spectators built a row of snow across the track.

Current Champion, Kris Meeke then took over the challenge to the dominant Fiesta, taking second place after Sarrazin also suffered a puncture.

Peugeot had more bad news early on day two when Kris Meeke crashed out while second, hitting a bridge in the process. This allowed Hirvonen to extend his lead further, despite a puncture. With Meek’s retirement, Skoda were now second with Juho Hanninen but would come under increasing pressure from a recovering Ogier in his Peugeot by the end of the second day.

Ogier won the first stage of the final day, later moving into 2nd place after some good consistent results but disaster struck on the penultimate stage when the car suffered a mechanical failure.

Mikko Hirvonen would take the victory, by almost 2 minutes from Juho Hanninen in the Skoda.

Nicolas Voulloz was third, in a one-off outing for Skoda,,,,

,,,,while the first Peugeot home was Stephane Sarrazin.

Jan Kopecky, who was 26th after Stage 1 worked his way back up to an excellent 5th place,,,,

Leading Subaru was Olivier Burri in 13th while the first Lancer home was Michele Cinotto (above) in an Evo IX. 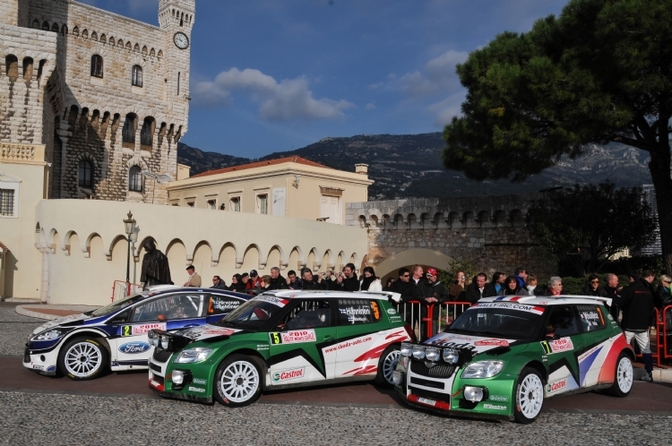 An excellent debut for Ford and M-Sport was followed less than 24 hours later, by victory for Nasser Al Attiyah in the Q-Tel Rally in a similar machine. M-Sport now have orders for 22 cars!  Skoda also did well finishing 2nd, 3rd, 5th, 6th and 9th! 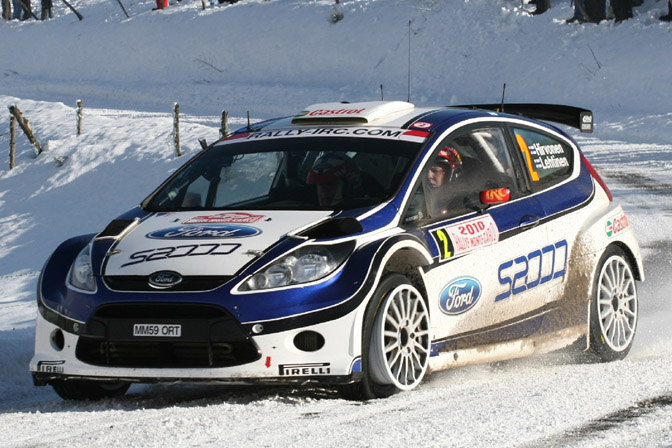 The S2000 will also form the basis of Ford's next gen 2011 WRC entry. New regulations stipulate a 1600cc Turbocharged unit and more parts from the road going Fiesta to bring down costs. (Useless fact- the current Focus WRC shares just 62 parts with its roadcar cousin)

The IRC continues in early March with the Rally Curitiba in Brazil.

So all autosport.com pics? No Rod or John pics?

No Autosport.com pics. Although Autosport may have used the same press and IRC images.

"Sarrazin moving up to second, while team mate Ogier, delayed when the Frenchman damaged a wheel after spectators built a row of snow across the track."

@ Alex. Such awesome ignorance! Sooo...tell me....what do YOU call it when a rally car goes through a corner sliding?

Nice review of Monte Carlo. I would like to know the story behind the little bastards sabotaging the track...

Great photos! You guys need to send out some photographers to get your own photos for some WRC or IRC rallies this season! My desktop is in dire need of something fresh, new and possibly airborne and/or sideways! The Speedhunters photographers are definitely coming into their own, and I'd like to see the results of their talents focused on rallying!

@ D1RGE.EXE: While I disagree with Alex, the difference between a sliding rally car and competitive drifting is that the sole purpose of sliding in a rally car is to go fast, whereas for drifting it is style. It's like comparing speed-skating and figure-skating, and saying if you like one, you should like the other.

Very nice, I love the hatch styling a lot of cars are moving towards globally.

"the Frenchman damaged a wheel after spectators built a row of snow across the track." what the hell did they do that for. Idiots!

Thanks for sharing this. That Fiesta looks fun to drive, I am looking forward to getting behind the wheel of one at some point this year!! More rally coverage this year guys!

@Alex- its funny how many rally drivers have come to compete in drifting. Very similar skill is required for both sports like extreme car control, amazing mental focus and 110% commitment but you already knew that I'm sure.

@ Malcom-decent analogy however its obvious you might not have made it out to a recent pro drift event. At this point in the sport it is more like judged speed skating then figure skating.Maybe pre 2005 could be compared to figure skating but the progression of the sport has us setting up for maximum grip and using momentum and power to keep the car in drift. The cars have so much grip it is mind blowing. I would almost guarantee that no one car drive a RWD car in a "slide" through a turn faster then a "fruitcake" pro drifter .

Throwing ice on the road is of course not very nice or smart but it kind of is a Monte Carlo Rally tradition, that's partly why the rally is so unpredictable and interesting. Spectators do it every year and it's actually not that bad (in a way) Back in Poland a couple of years ago the spectators threw does little spike ninja thingys on the rally stage "to spice things up a little"... Now that was stupid!

Wish The Monte was still part of the WRC calender.

Or at least a combined event IRC - WRC