Years ago, I remember my friends would always show me videos of the Berg Cup hill climb races in Germany. I didn't understand a whole lot about what was going on, but the cars were undeniably awesome. One model in particular stood out to me with it's small, fastback shape – the Opel Kadett. In Europe the Kadett Coupe is a bit of an icon, not unlike the AE86 is in Japan.The Kadett and the AE86 actually share a lot of the same traits – a light weight body, rear-drive chassis, and simple styling. Due to the car's cult status in Europe, we thought it'd be a perfect addition to our features this month. This particular Kadett is owned by Chris Letten of Belgium.

While the car may be popular in Europe, this platform was actually sold all over in the world, including in Australia as a Holden, and in Japan and the US as the Isuzu Gemini. Chris is a bit of an Opel maniac, who's owned several of the cars over the years. Like a lot of the cars we've featured from Kevin's archive – cleanliness and an attention to detail take preference over big power and aggressive bodywork.

Chris did nearly on the work on the car himself over the course of three and half years, with the help of some of his friends. The body is essentially OEM-spec, with the addition of a pair of Engelmann mirrors while the color is an original Opel selection known as "Aruba Blue".

You have the appreciate the simplicity of engine bays like this. The car is powered by an unmodified 1.2 liter, mated to an original four-speed manual trans. It may not be able to match the Opels of the Berg Cup, but it's still enough to get the car down the road.

Simplicity is also the name of the game when it comes to the interior. Chris added a few things, including a Blaupunkt CD player, a 28cm Victor steering wheel, and a custom roll cage.

The retro style Recaro seats are factory items out of an Opel Manta B GSI.

To give the car a proper, ground-hugging stance, Chris installed Koni Yellow shocks with KAW springs all around. Not surprisingly, you can also see a little resemblance to the Chevy Vega in the roofline. 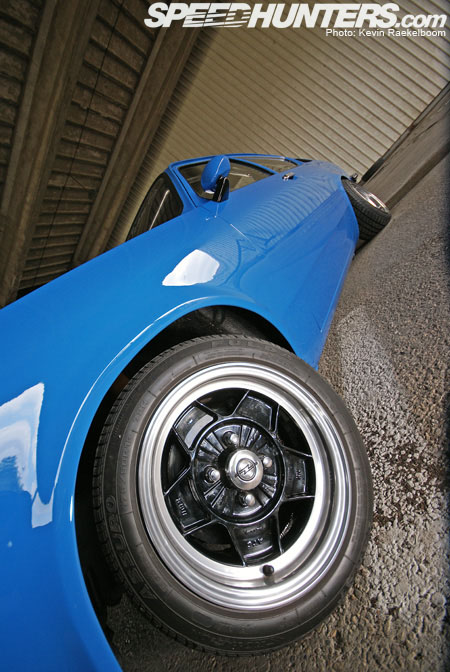 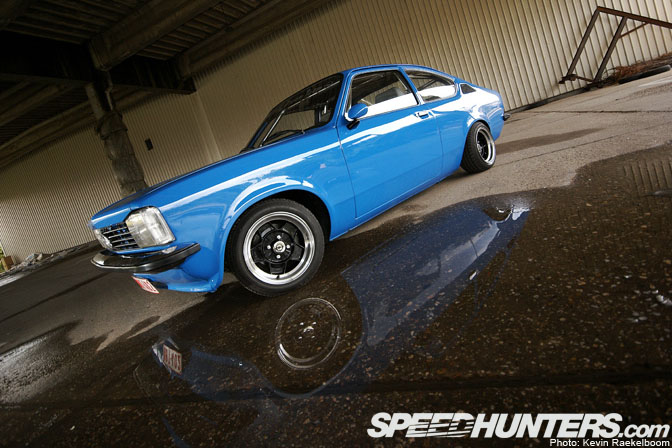 Chris eventually would like to add some more power to the car, but for now he's perfectly happy cruising the streets of Belgium in his cult machine.

Anyways, the slower he drives, the more time everyone has to enjoy the classic styling of the Kadett Coupe.

325is vs. Kadett Superboss: Celebrating A 30-Year Rivalry 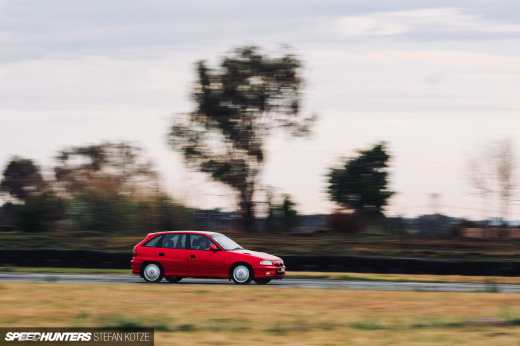 i saw this car featured in retro cars, totally badass

If only it were a Gemini ZZ/R, with the 2 liter DOHC engine.

brings back memories of Opel Treffens back when I was stationed in Germany.

as i read the title... i seriously thought there was going to be a twin turbo engine KA in this car. haha KADETT.

"In Europe the Kadett Coupe is a bit of an icon, not unlike the AE86 is in Japan." Maybe an icon for chavs, or maybe it is an icon in Belgium but it isn't in Holland for that matter. Kinda like the old skool look, apart from the hood, but come on a 1.2 NA engine combined with a friggin' rollcage. It's only a showcar, I though this was Speedhunters, first the van, now this. Sorry for bitching so much, but really don't like this car.

read the title, thought it was swapped with a 240 KA and twin turbo "KADETT". Never heard of this car. It is bad ass.

Haha, Oliver is a bit older but you've got the right idea! Hope you watched last week's special, it was awesome.

@MichelM - "Not big in Holland?" The biggest Kadett club in Europe is headquartered in De Horst, Netherlands. Last I checked, Holland was the alternate name for the Netherlands. They get featured in the European magazines every other month.

@Mike Garrett - The Gemini IS an icon in Japan of equal status as the AE86. There are 486 Gemini fan pages on the Minkara Carview website alone. Pick up a copy of J's Tipo magazine, and try not to find a Gemini.

No mention of the deity status of the Gemini in Australia? Fast Fours and Rotaries magazine should be renamed "Gemini Monthly".

And in the US, it was the Isuzu I-Mark and Buick-Opel Kadett, the Gemini name was not used there.

Very clean Kadett C!! the car is screaming for a 20XE on throttle bodies!!! I own a Kadett E GSI16v.

Where is the KADETT?

Had 2 Geminis in Australia.

My first car was a coupe like this. I killed the 1.6 engine in both in my early days of non-mechanical sympathy on the dirt. The second was replaced with a 1.8 but both eventually suffered from rust and went to car heaven.

I can only imagin how little power the 1.2 has. Drop a rotary in one.!!

I did some posts a while back.

I chopped this one to a super GT style. Maybe a good build.

@MicheIM, I also believe engine swaps are illegal in poland (i might be wrong), so dont blame him for the 1.2, and besides, the mini had an engine smaller than this and look how popular it was

I don't think the Gemini was sold in large enough numbers in Japan to equal the status of the AE86. I only recall seeing a handful at the various events I've been to.

It needs a C20LET turbo engine from ther Calibra :-p

awesome kadett! i will get one someday....to go with my Isuzu Gemini ZZ/T and others i have here

Love it, but it needs a real engine.

@Mike Garrett - Book name: "Isuzu Sports", published by Neko Mook, publishing date 2009, ISBN 978-4-7770-0937-4, Page 7, total Gemini production 1,923,378 units. That is the total for Japanese production only and excludes Kadetts built in Germany, Britain, Australia, South Korea, USA, Canada, and Brazil. Sounds like you should have done some research on GM's T-Car world platform before writing about it.

We have those here in North America but nobody realizes it. We only got the hatch version in 2 and 4 door and its called a Chevy CHEVETTE. And most people hate them. I have a soft spot for them cause I used to be into the C20LET motors and it variants and this was a nice sleeper platform.

Never thought I'd see one on speedhunters tho, lol

car is cool i've seen many of those over here, but this engine is a shame idont think that can give you more than traveling around :)))) this car screams for C20XE and its so cheap to be converted :))

Wow, there were almost two million T-body Gemini sold in Japan? I wonder what happened to them all!

You don't see many CRXs in traffic any more either, but no one suggests they didn't sell a bunch of them.

There were half a dozen Geminis at the 2009 New Years Meeting in Odaiba:

There's never a shortage at Eagle:

And if all else fails, do a search on Youtube for "Isuzu Owners Meeting".

sucks that you cant post your honest opinion on this site without a bunch of cry babies deleting your comments because you dont see it their way, isnt that what feedback is about! GROW UP you know who you are guys, btw my mom had this same car!!!! she is in love with this one BEAUTIFUL JOB!