The announcement that Nissan will, all other things being equal, return to the Le Mans 24 Hours next year with the GT1 GTR prompted me to have a look back at the last time Nissan competed in the GT1 class. Way back to 1997 and 1998 with the amazing Nissan R390.

After the demise of Group C and IMSA GTP there was a plan to make the GT category more in tune with road cars, so the Japanese manufacturers responded by building GT versions of the Skyline GT-R, NSX and of course the Supra. In fact we looked at the Supra earlier in the year.

Then in 1996 Porsche brought a gun to a knife fight with the introduction of their 911 GT1 and yet again we featured the final evolution of that car back in our Porsche month.

It was clear that for Nissan to have any prospect of success that a supercar would have to be designed and built and in double quick time too. There was only one way to achieve this task and get the project ready to run at Le Mans in mid-1997. Get the car designed and built by one of the specialists and who better than Tom Walkinshaw Racing? TWR had a record second to none in running motorsport projects for manufacturers, especially at Le Mans where their outright wins in 1988 and 1990 for Jaguar had passed into legend.

In addition to TWR's experience on the track, the company still had the services of one Tony Southgate, who had designed the successful Jaguars of the Group C/IMSA era. As Project Leader for TWR, Southgate came up with a state of the art chassis and bodywork made of composite materials, carbon fibre and kevlar.

Adding complexity to the whole project was the requirement to produce a road car that could be sold to the public. TWR Design was headed by Ian Callum, designer of the Aston Martin DB7 and he styled and oversaw production of the Nissan R390 road car, the fastest and most expensive road car ever produced by Nissan. Unlike Mercedes Benz GT1 project, Nissan created the road car first and thereby conformed to the spirit of the regulations. All in vain as the rules changed just before the start of the season allowing the road car to be produced any time during the calendar year. Mercedes showed their contempt for the process by unveiling their street legal version of the CLK GTR in late December, months after the FIA GT Championship had been run. All animals are equal but some animals are more equal than others………………

Callum made styling reference to the rest of the Nissan product range and heritage, using the twin front grills that gave a subliminal message "Nissan" and also the headlights had their origins in the 300SX.

There were only two examples of the R390 built for the public highway, with a 0-60mph time of 3.3 seconds and a top speed of 220moh, all at a price tag of $1 million, the potential market was a tad limited in size, at least those of us not day dreaming.

Nissan, or more accurately, NISMO rummaged around the back of the engine storeroom and found the V8 that used to power the 1990 Group C Le Mans entry. This 3.5 litre twin turbo V8, codenamed VRH35L, had been extensively updated since its previous visit to La Sarthe to cope with the new demands imposed by air restrictors, especially in the area of friction reduction. The engine had two overhead camshafts per back of cylinders with 32 valves in total. There were 2 IHI turbos and the power "over 600bhp" was sent to the rear wheels through a transversally mounted six speed sequential gearbox designed and built by X-Trac. Tyres were provided by Bridgestone. 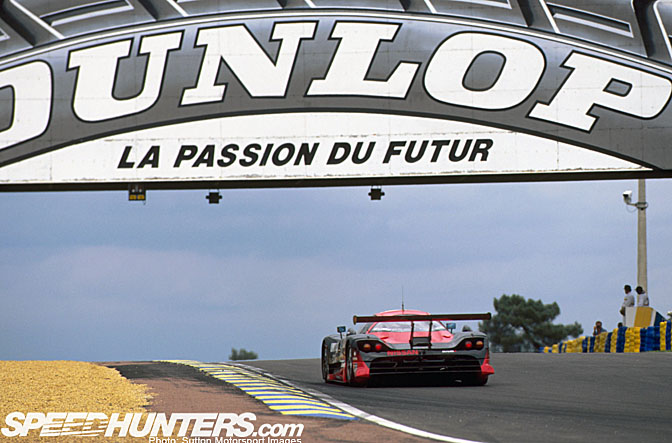 The final piece of the jigsaw was to assemble the team for the attempt on the world's greatest race. Nissan had failed in their previous attempts on the French classic, most notably in 1990 when despite having the best car, political in-fighting and lack of co-operation between the British, American and Japanese teams (yes three separate teams!) they conspired to lose the race…….to Jaguar and TWR…………………….this time things would be different.

While Tony Southgate headed up the TWR side of the operation, Tom Walkinshaw himself being on Grand Prix duty with Arrows, Kunihiko Kakimoto was Nissan and NISMO's man in charge. For the race there were 115 members of the team, 40 from TWR and the rest from Japan.

The team had a very strong pool of drivers available to them. #21 had TWR's favourite son, Martin Brundle with Jorg Muller and Wayne Taylor, a late substitute for the injured Mauro Martini,  joining him behind the wheel. #22 was crewed by Ricardo Patrese, Aguri Suzuki and Eric Van de Poele. The third R390, #23 had Eric Comas, Kazuyoshi Hoshino and Masahiko Kagayama on driving duties.

The attraction of the World's Greatest Race is attested by the number of entries, always in excess of the track's licensed limit. 1997 was no exception with 86 applications which the Selection Committee of the ACO whittled down to 76. These were invited to turn up at the beginning of May to see who would go forward to the race itself. One entry dropped out, six were granted exemption by virtue of 1995 results, so 69 cars scrapped for the 46 places on pit road during race week itself, some six weeks hence. Oh, and of those 46, four would go home early, all nice and clear.

For factory teams such as Nissan this system gave a few sleepless nights as if they did not achieve the right level of performance then it was no race after all that effort……..and expense.

The cars were split up into two groups, one running on Saturday, the balance on Sunday. Everyone in the paddock was given a reminder of the ever present dangers in the sport when an accident on Saturday claimed the life of the promising young French driver, Sebastian Enjolras. There was little enthusiasm for running during the rest of the day. The timesheets were topped by the McLaren F1 GTR of JJ Lehto with 3:45.973. The #22 Nissan was around three seconds back but comfortably in the race.

The pace hotted up on Sunday and as usual the teams all put on stickier rubber as the clock ticked towards the end of the session and no one wanted to be left standing when the music stopped. For #21 there would be no worries as Martin Brundle was in outstanding form, scorching round in 3:43.152 to record the fastest time of the weekend. To complete a good weekend for the Anglo-Japanese team #23 was also in with ease. Quiet satisfaction and a job list of improvements to be made were the conclusions taken away. next up the race.

I used to love kicking ass with this car in Gran Turismo 3.

I think I prefer the short tail version of the R390 rather than the long tail one from 1998. Anyone with me on this?

Aaah the R390. Now that was a badass racer. It was and still is my favorita all time lemans racer. I really have no clue on how Nissan will top it.

I remeber this vividly and watching them shame what happened during the race. Definately one of my favorite cars of the era.

THE ULTIMATE NISSAN ......TO ME AT LEAST

Id put this as a solid number 2 in my top ten list of favorite cars featured in Le Mans. Number one being the legendary Mazda 787B. Excellent piece and I look forward to reading the subsequent parts!

Bigtdogg, i do believe he is referring to the fact is says crankshafts and not camshafts.

copy and paste crap with a few oddball inaccuracies thrown in