It has been a painful year for many people and companies at every level. Many companies have seen massive restructing, administration, closeures and bail outs. Unfortunately there have been many casualties and many people will be having a torrid Christmas out of work. So spare a though for anyone affected by this whole mess.

Sadly, another casualty was announced today.

GM has announced, Svenska Aeroplan AB, otherwise known as ‘Saab’ will be no more. Despite a number of buy-out discussions  with the Chinese, Koenigsegg and more recently, Spyker, GM will wind down Saab and make the once influential brand disappear. A suitable buyer could not be found.

If truth be told, this wasn’t entirely the fault of the credit crisis. Saab was a leading brand from its birth, back in the 1940’s through to the 1980’s, producing quirky but very advanced cars, bringing Turbochargers (such as the 900 Turbo, above), Aerodynamics and Safety to the mass market.

Sadly, quirky cars don’t make a huge profit as Saab and other brands like Citroen have discovered.

GM bought the then un-profitable Swedish brand back in 1990 and they did a poor job looking after it. Lack of investment, before and after the take over, resulted in out of date and uninvolving cars to drive. Why would you buy a more expensive Saab 90 when it was an old Opel Vectra underneath? Traditional Saab owners knew about cars, and they wouldn’t be fooled by that and shopped elsewhere. Some design moved from Sweden to Germany, loosing a almost unique piece of DNA from Swedish design and culture.

In recent years, there have been signals of a brighter future from Saab with some exciting concepts including the Aero X concept shown at the top, designed and engineered by some of my Uni colleagues from Coventry University.

Saab had a long history in rallying, the 96 and 99 being very successful and helped the careers of many Scandinavian Rally drivers.

So it’s a sad day for the automotive industry and for the town of Trollhättan where I’ve spent many a weekend. Some of the younger readers will regard Saab as ‘just another brand’, but once they were automotive pioneers and it is a shame this slow death has been allowed to happen. 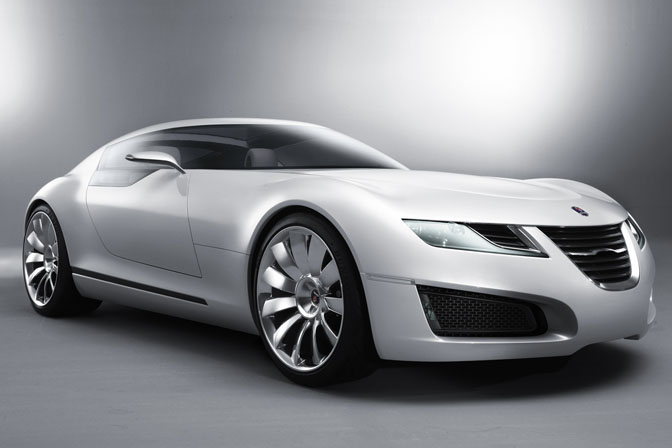 Can We Talk About Speed?

What a sad day for the automotive industry. R.I.P Saab.

Agreed, sad day. As a child of the 70's it is sad to see how Saab just became a bland range of cars

always interesting shapes except the 9.5

that does suck, its never good to see a big brand die

didn't realize how ahead of the game they were....once

Its sad to see saab go, but GM absolutely ruined their name, making some of the most unreliable cars of the time, though still good looking. It would have been nice to see the final production of that 9X there, but I guess it just business. As much as I love the 9-5 I drive at the moment I must say that it is one of the biggest lemons out there, and for that it is no wonder you won't see them on the roads anymore.

Here in Sweden it's a sad day.

Around 8000 jobs will be lost.. and do remember we are not a big country.

On the other hand SAAB has not been making any money for many years. If it's GM's fault or not I can not tell.

But I guess the GM will keep the SAAB's knowledge and the parts that they like, so maybe Cadillac will get better!

Very sad about this. Complete bummer.

Thanks a whole bunch, GM.

very sad day,we will sure be missing those mad turbocharged cars...

Saab was... the leader of sweedish tech untill volvo and koenigssegg passed 'em by. Saab will always have a place in my hart, I owned 2 saabs, and now, i want them back. I will miss saab, its such a huge blow.

Koenigsegg was a suitable buyer (probably the only really good one), but the swedish government screwed it all up, making them sign over 80 contracts and thus the whole process took to long and they had to pull out , so the swedish government is 100% responsible for the cancellation of saab. we as a country hould be ashamed of ourselves that we have such a moronic government. :big sadface:

They made a mess of Opel and Saab and they cant build a proper car.

I may be a "younger reader" at 16, but my uncle used to have a Saab when he worked for them (here in the UK) years back and I remember him having loads of Saab memorabilia. I still have some that he gave me. I also have family in Sweden and I guess it will be a sad day for them especially. Sad to see Saab go.

sad day.My heart goes out to the people of trollhatten the bankers strike again.

First Rita Morgan from the TV show, Dexter, dies and now Saab is dying? What is this world becoming?!

GM sure knows how to screw things up. Sad to see this brand going, it has made many advances in car technology too.

Very very sad - our family has had 2 Saabs and they were interesting cars for sure.

We need companies such as Saab, Spyker, Subaru etc to spice up the auto industry or we'll just be left with everyone driving Toyota camrys and Honda Accords....

RIP Saab - I hope this isn't the end...this is just too sad.

damn, the 900s were some of my favorite cars when i was getting into cars, i cant believe all that rich history is not going to be making anymore chapters in the automotive world... i have to go dye my hair black, throw in a pound of hair gel an stick to my forehead an throw on 500 black rubber bracelets because im way emo now...

Aaaw, I wish i had the means to buy it.

This is sad. I've never rode, owned or driven a Saab. In fact, I've never touched a Saab, but being a great fan of Citroen, I can definitely appreciate their quirkiness and innovation. I still hope the brand will not be dissolved and a buyer will come up in time.

I feel sad for all the people loosing their jobs, but let's face it, SAAB had it coming. I can't believe they made it this far. SAAB's answer to the climate problems were 250+ HP E85 cars ... What the hell were they thinking? They always continued to make big, thirsty cars and trying to compete in the luxury segment, which they obviously couldn't compete in, far from it. GM involvement is ofcourse ridiculous, I mean what the hell, the Trailblazer based 9-7x and the "Saabaru", need I say more? SAAB may have been ahead of their time with the first turbocharged cars, but from then on they have kept falling behind.

It really is a sad day, a shock day as well as I for one, didn't quite expect this... I know that Saab doesn't fill the streets around the world but I do know a thing or two about it's influence and inovative designs.

Especially after seeing Aero X concept, I thought that Saab will enter a new era and shake the automotive world with a brand new and exciting line up of cars. Really sad and unexpected, somewhat...

I wonder how many if any of these brands that have fallen under the weight of times will ever be brought back to life...

I fell in love with Saab's when I first set eyes on the Saab SPG back in the late 80's when I was in High school. 4 years after graduating a charcoal grey Saab SPG became my first car. I loved that car to death, it was roomy it was fast and it was different. I use to to always get harrased by volkswagon GTI's to race on the New York City highways and parkways and never lost. As time went on I sold it and bought an old 1976 BMW 2002 because the transmission went and it was way too much money to repair.. By 1999 I fell in love again with the return of the SPG but it was renamed the Saab Viggen. I still would get one no matter if they are here or not. Sad day to hear I will not be able to look ahead to new innovations from the SAAB guys. Guess it really is a Saab story. -Whob

Yay! no more headaches in the shop!

What about Scania? Theyre still churning out Trucks, They Cant scrap the SAAB label in its entirety if The Trucks are still making Revenue....

Depressing news indeed. Though I'd never buy one of their cars, they (older pre-gm) had a personality and always seemed quirky to me. They were the different brand, and that was good! I'll miss you Saab, you turbocharged, torque-steering weirdos!

Bummer had my 1999, 95 estate for 6 years its never missed a beat its not the most econmical kid on the block but i loved owning it ,am currantly looking for a 93 sportswagon but price will have to be right cos values will pprobably fall like a stone, sad day

It's not over yet....but it's not looking good. I hope they make it out alive, but if they don't I will continue to own/repair Saab's. I also vow never to buy a GM product for the rest of my life. I just hope FIAT comes back stronger than ever.

I have unwillingly been adopted in the saab family. My father has owned three saabs, 99 turbo, 9000 and now a 9-5 biopower, i bought the 9000 from my dad earlier this year and may say it is the least quirky saab, however it doesnt got a turbocharger as my dads cars have and it starts to get me on the nerves with the electrics and problms coming and going, my doors suck as they wont open because of the locking mechanism etc. etc. so yeah, i wil switch for a honda which is the brand i really love, only thing i like about saab is their engines, E85 and turbo is a great combo and i want it in my future honda...