Like a proud father, I am very happy to introduce a new generation of the Ford Mustang – the Mustang RTR.

I have dreamt this vision in my head for years; unfortunately, it has taken so much time for me to find the right people to help take the vision from my head to paper, then to the actual prototype phase that you see here. It sounds a lot easier then it really is – trust me!

I fell in love with the Mustang in late 2004 and, as most of you know, we have been inseparable since.

The Ford Mustang is the number one most customized car ever. With that being said, one thing I have noticed over the years in the Mustang community is that most of the aftermarket styling is heritage-based and very few dare to sway from the traditional aftermarket styling points when personalizing his or her Mustang.

There is no question Mustang’s performance, quality and looks are evolving from the factory, but for some reason the aftermarket styling has not progressed for the most part with regards to ascetics. Don’t get me wrong, I have huge respect for anyone that personalizes their car in any way, but I just wanted to get a new generation of Mustang out there that shakes it up a bit. Something a little more modern with design influences that I know the majority of my generation can relate to, something that might open up some new eyes to Mustang.

My goal was to introduce something that appeal’s to not only my generation, but to car enthusiasts as a whole, as well as any traditional Mustang enthusiasts of any generation.

It is a design most anyone should be able to appreciate immediately and see themselves behind the wheel of – whether they are trashing a set of tires, blasting a straight, carving some turns, linking a section on the drift circuit, or simply just cruising along with your better half.

I feel I have successfully made my dream a reality with the Mustang RTR.

The Mustang RTR package consists of the following “eye candy”:

All of the body parts aside from the spoiler are OEM quality ABS plastic created by Classic Design Concepts in Michigan – no fiberglass here!

The Mustang RTR is a post-title dealer-installed package that will be available in multiple color combinations at select Ford dealerships nationwide starting in February of 2010. We have started out with only the GT package; however, a V6 version will be announced in the near future.

At this point, the RTR package for the GT is estimated to retail at around $7800 installed on top of the cost Mustang that you spec out from the dealer. I have not decided whether or not to limit the production just yet. Everything shown here are all prototype parts and everything I have mentioned could possibly change slightly, but all in all, most everything is finalized and Ready to Rock!

The first production Mustang RTR will be at the K&N Filters booth (# 22443) during the SEMA Show. Make sure you stop by and check it out! For more info, check out www.MustangRTR.com. 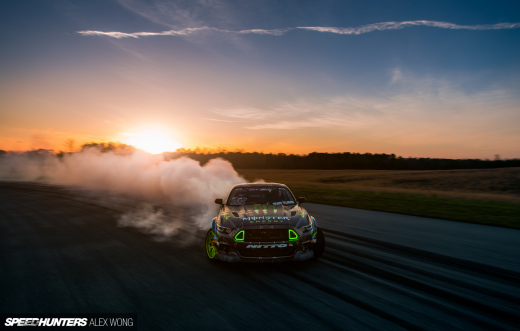 From Bare Shell To Podium: Inside The Mustang RTR 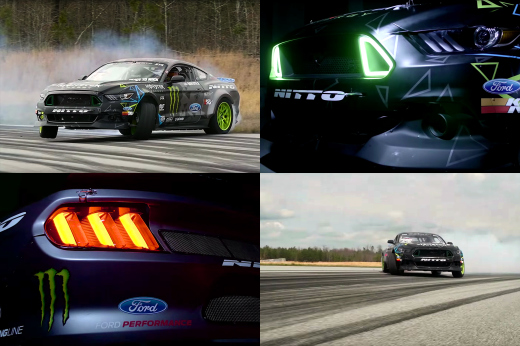 I want to live in the USA, just to see this car live

Can you make a Video so we can hear the sound?

i want this car

is it possible to opt out on the vinyl graphics? and any other color optoins?

Kick ass Stang there JR. Your goal is a reality. All it needs is a supercharger and the guys at C.D.C. do great work. It shows that us guys here in Michigan can build some kick ass cars. Good luck at SEMA JR. BOOOSH!

This is a nice supprise! I thought the CF body was a little mutch for the average consumer but this seems to tickle my fancy. I do like what I see. I very well may consider one of these with my re-enlistment bonus. Any idea the timeline of how long these "Upgrades" will be avalible? Also what are the chances that we can get a alternate factory produced hood just in case I feel the need to dish out 5k to supercharge. Also will this be compatible with the 2011 Mustangs? Word on the street is that the Coyote V8 option will be avalible for the new year. Srs Buyer here and the more answers I get strait from the horses mouth the better..

@M4XVLTG3- it should be available February 2010 and yes it will be compatible with the 2011's, don't you worry! As for the Supercharger, no need for a new hood. They finder there just fine!

Thanks everyone. I'm glad your digging it!

I must say 2010 Mustang has to be the sexiest designed mustang in a long time. And ontop of that, wow this just blows me away. Wooh, its sexy

I agree with you JR, no one was really getting aggressive, yet still clean with the stang. I owned a '94 and love the 2005-10 stang (especially the '10). The RTR looks great!

I want one NOW.ford PLEASE bring the mustang to the uk PLEASE!

That is one sick mustang JR, my only complaint is that there are way to many RTR badges lol. When I win the lottery, Im gonna get one =)

The Challenger is an LX-boat, the Camaro looks like something out of a cartoon, Solid axle or not, the 2010 Mustang is a winner in my books. The splitter kit is perfectly executed and looks aggressive and modern, yet clean.

Needs better rubber though. In my experience FK452s have been very subpar. Less than ideal in cooler weather, extremely poor performance in the wet, and poor temperature performance on the race track - Can't wait to change them...

However as someone normally uninterested in american muscle - in particular the bland standard Mustang - you've made me rethink my opinion. This is hot hot hot. Great work

I do believe this is a very good looking mustang, glad its lower than stock. But i think it needs more power, its faster than the camaro due to weight, but once you add all these goodies, how much do you gain/lose in return?

The car is cool in every way, but what rear suspension does this have? As far as I know, the previos gen had live-axle

I wanted the package to be affordable which is why I did'nt force a supercharger on everyone. If you want to add a supercharger you can do that at the dealer. They will be glad to add a 400hp or 550 hp Ford Racing supercharger kit. This was meant to be a aggressive looking better then stock performing machine and I feel we accomplished that.

SIIM- it has live axle still. but dont let that fool you pal, the car handles incredible.

Does it still has the Live rear axle?.... Sorry but, no thanks

I think you will in fact turn a lot of people onto the Mustang that otherwise wouldn't have considered it an option.

I do think it would have been better to go with Azenis RTs 615 versus the FK 452s, but I'm sure there is a reason you didn't go that route.

Can't wait to see this thing in action, hopefully we'll get to see you doing your thing in the RTR soon?

dude the vinyls kill it.. but apart from that its a BEAUTIFUL car. the RTR totally rocks the mesh rims (maybe it'll start a trend?) they give it a more serious, performance-oriented appearance that few other mustangs can pull off. but for me the vinyls just kill it.. the navy blue paint and graphite colored rims go well together with the mustang, but the light-colored (or reflective) vinyls make it look almost silly... but again, without the vinyls it looks amazing. while car styling seems to be progressively getting worse, this car shines

Awesome car to me it strikes a great balance, a couple things I would like to see are 4"tip mufflers those 3.5" are to small, an center foglight grill, and a shorty antenna that being said. JR are you going to be able to buy the parts separately or will you have to get them through FRPP? I may switch to a gt front bumper on my 2010 just to run this front lip/splitter combo I like it that much. I'm also really liking that aluminum rear wing and the ad on side splitters any idea how much they will cost? Anyways always been a big fan of your drifting style and choice of ride can't wait to see how the RTR program takes off in the future good luck JR