Fuji Speedway is the place to be this time of the year as two of the biggest events of the calendar are hosted at the international circuit. I am of course talking about the Toyota Motorsports Festival and the Nismo Festival, which this year are held within two weeks of each other. This past weekend was Toyota’s turn, which managed to attract a pretty impressive 28,000 people to the freezing race track in order to celebrate the past year’s achievements in motorsport…

…but most importantly to officially end its involvement in Formula 1 by giving fans a final glimpse of the 2009 cars before they are put to rest and stored away.

I got there nice an early despite the crazy traffic on the highway, due to the majority of the population of Tokyo deciding to head out of the city for the long weekend. With temperatures hovering a few degrees above zero, and with gray menacing clouds I was ready for the worst. Luckily however, what little rain fell, immediately stopped and we even got to see a few glimpses of the sun in the afternoon.

There is no doubt that 2009 is the year of the Lexus LFA. Since its unveiling at the Tokyo Motorshow last month everyone has been talking about it and Toyota knew exactly what the fans wanted to see. So as I made my way through the pits before the main opening ceremony kicked off, it was the two race LFA’s I headed to check out first.

We have all seen these Nurbugring 24h race cars before, but I finally had a chance to really take in the details. Here is a closer look at those snout-mounted supplementary headlights, just what you need when blasting over blind crests on the Nordschleife at night!

Both race cars were driven throughout the day on the track, at one point even by Toyota president Akio Toyoda, who also piloted the LFA at the 2008 Nurburgring 24h race.

These Gazoo Racing cars are painted matte white and black and are still battle scared from the German endurance race. There are some small styling differences between these and the final production car, something we will see in a later post.

I grabbed this shot of the Key’s Racing steering wheel through the opening in the plastic side window. There are no creature comforts, nor nice suede and carbon fiber trim in here, it’s all pure race-slash-development-car.

Toyota has been involved in F1 since 2002 and first competed with this car, the TF101, which scored a point in the first race it participated in. However, Toyota’s F1 career has not been a very fortunate one, it has never won a race in the 8 years it competed and the highest ever result was a second place on the podium in 2005.

…and get my eardrums blown by the noise from the impact gun as one of the mechanics was tightening the wheel nut. Check out the ear protection he is wearing, I could have done with something like that!

This message says it all.

The details on an F1 car are simply incredible; every square millimeter has been designed with some kind of aerodynamic function. Just look all those little winglets on the side of the front spoiler.

…one of them was Kazuki Nakajima, or Nakajima Junior, who has spent the last two years with the Williams F1 team.

Toyota didn’t forget drifting, inviting some of the top D1 drivers that drive or have driven (in Ueno’s case) Toyotas. They put on a nice drift exhibition later on in the day, but more on this tomorrow.

Toyota has been a fighting force in the Japanese GT championship and all Super GT GT500 and GT300 drivers were present, like Irishman Richard Lyons and Yuji Tachikawa of team Zent along with Andre Lotterer and Juichi Wakisaka of the Tom’s Petronas team, all drivers of the Lexus SC430. 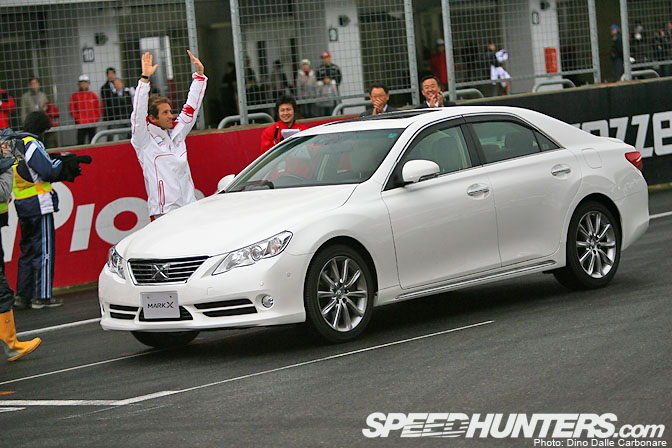 F1 driver Jarno Trulli was escorted onto the main straight on board the brand new Mark X, the successor to the Mark II, that has now been on sale in Japan since 2004.

Toyoda-san gave a speech, apologizing to the fans for Toyota’s poor performance in F1. He then personally thanked Trulli for all his efforts and his great service to the team.

…as well as that crazy looking Corolla Axio that races in the lower GT300 class.

The proportions are all wrong but it just looks so cool out in action!

…overtaking the busses at full speed to give the people that signed up for the “tour” quite a sight.

Here is Richard Lyons blasting down the Fuji back straight on board his Zent Cerumo SC430. The team finished in 10th position in this year’s championship.

…with Trulli and Kamui Kobayashi driving at full pace for five laps. Words cannot describe the feeling of having a modern-day F1 car speed past you along the Fuji straight! I had to put the camera down at one point and just enjoy it!

That is it for Part 1, make sure you come back tomorrow for a more detailed look through the pits and paddock of Fuji Speedway.

ONCE AGAIN "I LOVE WHAT YOU DO FOR ME TOYOTA!!"LOL

That must have been one helluva view on the bus seeing the racecars pass them on track.

great event looking forward to part 2.Its a shame toyota have pulled out,because they where competitive this year at the start.Anyway at least they can focus on super gt and get a lexus lf-a gt500 ready...

whoever thought of that bus deserves a promotion

That bus thing where it goes on the track.... ive seen it done before at ebsiu except the bus was on the outside of the corner watching all the dope fd's, 86's, and s chassis' drift by. i think it was an MSC event.

Jarno Trulli also got a 2nd place finish this past season in Japan, aswell as timo Glock getting a 2nd place in his last race of the season in Singapore.

I wish I was there Dino!

Great pictures! Nice to see the Toyota F1 car up close, but I'm saddened that both Honda and Toyota have ended their involvement with F1. In the end, politics and money got in the way of good racing for the fans, as it always does.

Simply amazing!...i would of given my one and only kidney to be there!...cant wait to see the rest of the coverage!

Toyota should have dropped the price of the LFA, made it a Toyota, maybe a V8, and called it the Supra. As for top D1 drivers there's only two real top ranking drifters there, Still great coverage, but Toyota needs help IMO. There is just not really anything exciting about Toyota. Unless they brought out the FT-86 out to play.

i want to see the rest of the coverage, i would kill to be there

On LFA -"small styling differences", the production model has a whole new body, and IMO much more fat & uglier. They should have sticked with this design.

This years Toyota fest is indeed a bittersweet one. Its great to see the success of the new models like the LFA and 86, however its also sad to see the F1 team disbanded and all those engineers leaving. I feel for all of the people involved with the F1 program, especially Jarno Trulli for his dedication to stay with the team up until this Toyota fest so he can drive the car one more time and thank the fans and the upcoming Kamui Kobayashi, who knows what he would have done, Timo was not bad as well.

I dont know how you can go to an event like that and focus on taking photos. You're very committed to your work, because it were me, i would be watching everything that went down.

The Formula Nippon chassis is made in America.

Great post i hope to attend one of these festivals. To bad for the F1 program, wish Trulli the best. one of my favorite drivers.

Was Glock not at the event? I'm sure he'd be still under contract wouldnt he?

That bus.......that is awesome! Love those SuperGT racers, I didnt like the SC430 when it started racing but its slowly grown on me especially the Petronas livery-but it'll never be as loved as the Supras were.

Oh man, for the first time ever I wish I was on a bus. A bus with Formula and GT cars speeding past!

I really enjoyed reading that one! One of my favorite features in Speedhunters of all time. Thanks, Dino! This just made my day!

where is Orido theycant have a toyota event without him wtf

the bus ride is called GT Safari ride...we used to have it here in Malaysia whenever the Super GT guys come here to play at Sepang...