Last year at SEMA , I spent a lot of time walking the floor, processing photos and preparing stories for Speedhunters.com. However this year, we had Mike Garrett taking care of these duties, so I was free to focus on securing some exciting new Speedhunters business partnerships and collaborations for 2010.

My partner in crime, Rachel Kelly and I were so busy doing back to back meetings, that I didn't get to shoot the whole show. Oh well… I still have some Speedhunters reports coming out this week, none-the-less.

So I thought I'd start my SEMA coverage out, with a tour of the rather large and
diverse car display which stretches out in front of the Las Vegas
Convention center.

Walking this line of cars gives you a picture of all the different camps of modified and customized car scenes, styles and cultures in America. If you have narrow automotive tastes (ie only like cars with stretch tires and offset) then this perhaps won't be that interesting but for an automotive agnostic like me, it's a good way to get a feel for the American scene in all its glory.

So in this article I'll showcase for you the cars which caught my eye in this line up.

Some cars, like this giant aluminum Peterbuilt Rig Rod, deserve to be broken out into separate car spotlights.

Same goes for this dropped and turbocharged Caddy… I'll show this car in more detail in a separate post.

Yes those are Work rims…  This Japanese built "Akira" Camaro stopped Mike Garrett and I in our tracks for quite a while as it's an original take on the notion of a high end Muscle Car build. It seamlessly blends together 1960s custom car, Pro Street and Pro Touring styles together to end up with something quite original. Mike will look at the car in more detail soon.

We'll also see if we can get Dino to visit the Japanese Hot Rod shop that built it!

Mike and I saw this Chevy and said to each other… wow the Chicayne is here! But after looking at the car for a minute we realized it was an Impala and not a Biscayne… oh well!

There were several examples on display at the show. There's something quite cool about custom pickups IMO!

There were all manner of modified Japanese cars on display in front of the convention center. Many of them were SpoCom style wide-body PR show cars, which is something we tend to avoid on this website. I didn't mind the look of this clean 350Z though.

This bagged Lexus was also working for me.

Anyone in here into Ed Roth? This is a tribute car based on a 1975 Corvette chassis called "Bubble Ray".

From what I can tell it's a Roth rendering come to life.

Check out the pure 1970s style wheels… This is pushing the envelope of style… love it!

The engine has been left exposed.

Here's a closer look at the cockpit.

The original Corvette wheel has been left in place… You don't see steering wheels this large any more on production cars. I wonder what the thinking was back then.

Out back the car has more of an early 60's show car vibe. It's an unexpected and wild set of elements.

Here's Mike Garrett checking out a dropped Scion xB. I know a lot of you will disagree with me, but personally speaking, I love the combo of old school style Japanese wheels on newer cars.

There's something about the shape of the headlights on this Hyundai that says "Batman" to me. IIRC there were only two Genesis Coupes on display last year, but there were plenty of examples at SEMA 2009.

I'm including this photo just to you can see the range of cars on display at SEMA, as there were plenty of this type of thing at the show…. BTW I was telling the Source Interlink magazine crew about how Speedhunters is trying to reclaim and reclassify the word "Rice". They weren't buying it though. I suppose I don't blame them!

SEMA is so full of people you often to have to wait a minute or two to get a clean shot of a car.

There we go… IMHO Ryan Gate's AMS Evo is one of the nicest built up "X" chassis anywhere on the planet. I'm hearing he's an amazing video game player and was giving Vaugh Gittin JR a hard time, at the NFS SHIFT gaming kiosk we had set up in the K&N Booth.

Here's one of my top cars (err trucks!) from the show….

While so many of the cars at SEMA are well into the OTT (Over The Top) side of things, this Chevrolet pickup manages to balance out the wild with the restrained.

The builders have left enough factory elements in the car to keep some of the original machine's character.

I also think the wheel choice is an excellent one. While still very large, they aren't so blinged out to make the truck look like an oversized toy.

The cockpit manages to be retro, futuristic and stylish all at the same time!

It's a different side to slammed car culture… you could also say: Hella Dumped!… Well if you are from Nor-Cal…. 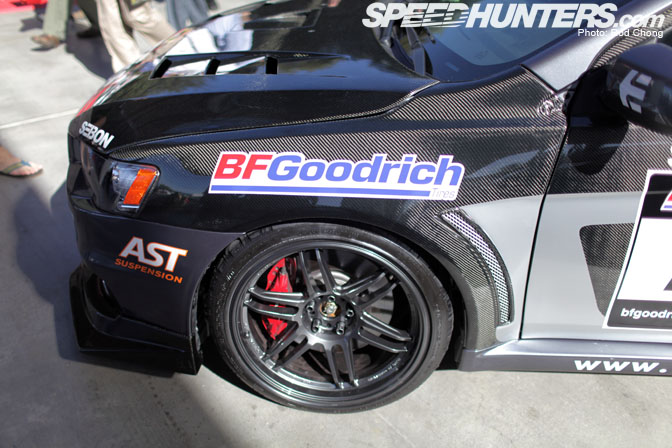 Sonoma California based Mitsubishi tuning house had this carbon EvoX on display. It's likely on the way to Button Willow for the Superlap Battle as I type this.

I was well pleased to see this VIP style Estima in the line up.

It was sitting pretty on a set of Work Eurolines.

Outside of Japan, VIP vans are a bit of a sub-genre of a subculture…

… so it's great to see the SEMA organizers had enough sense to put this van into the line-up.

And lastly I want to highlight this old Pro Stock Mustang.

This must be one of the original Pro Stock cars from the first years of this drag racing class. If you compare this Mustang to a modern Pro Stock drag racer, it's amazing how far divorced they are from production cars.

And another shot of the drag race meats…

Ok that's it for today… I'll give you a quick sweep of the show floor from my eyes next, before I start to look at my own personal fav cars from the show.

Awesome coverage I'm a truck lover too when you do a smaller truck up right it looks sweet as hell. I love the way the guy did up that old chevy got any more info on that thing!? I've owned 2 trucks one S-10 and now a little 96 Nissan pickup I'm kinda stuck on em, due to the fact there are no RWD cars anymore and I cant afford a Subaru or a old Datsun right now lol

love the trucks too.

Please to a blog on the Peterbuilt rat-rod...that thing looks sick!

Did any of you get any shots of the new Legacy that was all VIP'd up in the Subaru booth?

Yes please more on the Peterbuilt Rig Rod.... Ive never seen anything like that... and a post like that would be a first on speedhunters I think.

idk about Batman, Rod. She kinda screams Jack-O-Lantern to me.

Great shots Rod! That orange dumped Chevy pickup is SICK! More of that Japanese Camaro with Work wheels too!

Are you guys using the tilt-shifts in some of the photos? Some of the cars look like toys straight out of Matchbox collection...

Thanks for the compliment on the car! Just some info on the game deal...I've never played NFS Shift before Weds when I played at the booth...and was 4 seconds faster than Jr. haha. It's all in good fun I suppose.

all of the imports you took pictures of are whack like...the celica, the van, the nsx in the first pic aswell as the one's behind it, the 350 z. basically every import except for the ams evo x that shit was agressive!

Ryan G, if you like video games you should play Forza 3. Someone has even painted up a really nice replica of your car that you could buy on the storefront. I've actually got a copy myself haha.

Truckin featured that cream and yellow C10 last month. The article is on thier website: truckinweb.com

AWESOME COVERAGE! This is the SEMA coverage I love to see. Is there any chance we are going to see Ken Block's STi on tracks featured?

All in all, awesome coverage from everyone involved!

I can tell you why they had big steering wheels back then... No power steering!

That slammed truck looks AWESOME! And u def. need to arrange a spotlight on that Peterbuilt Rig Rod!

The rims on the "Hella Slammed" truck are perfect as they are big yet tastefull and give the impression that the truck is on the move. Love it! MOAR MOAR!!! :))

Solotwo; I think Mike is doing this car.

Sick of Speed: Linhbergh uses a swing/tilt lens but not me.

Some guys: I'll agree the Celica is "whack"... I put it there to show you what kind of cars were there... not because I think it's cool.

Rod the photos look great! You get some new gear? New editing perhaps?

about that Peterbuilt rod, is that the one by the blastolene brothers? if it is Jay Leno did a short vid about it on his site "Jay Leno's Garage", not to take hits from you guys, but it just seems easier to understand when you have the guy who built it talking about it..

Wow, I find the outside even more interesting than the inside!

Oh man, can't wait for the feature on that Caddy! Looks pretty sweet based off that one shot.

Sorry but the first pic NSX deserves to look better than that. All the NSXes (regardless of the year and model) need is simple paintjob- I love black (not flat) or even whilte- but done to perfection and for the older pre-2002 cars, a nice set of rims (along witha super sticky Potenzas), an upgrade to the seats and you have yourself a brilliant car both in looks and in performance.

Please increase the exposure duration for a wider/deeper depth of field. Your photographer may be trying to blur out the background, but he is not getting the entire vehicle (subject) in clear focus. This is especially obvious on the Ed Roth Vette photos, which would be nice to see in non-blurry photos.

My girlfirend HATES the Estima/Previa vans, complaining that you can't tell if they're coming or going, but I like the VIP treatment on the one above.

Oh, and I second what Photographer said in the post above mine. Please use a more appropraite depth of field/focus. Leave the artsy "blurred" shots for desktops.

I'm really keen to see some more on that turbo(diesel?) Caddy!

The wheels on the bubble top Vette are pure late '80s/90's, sure the tyres have the '70s going on but we hadn't been subjected to those nasty billet wheels until much later

What's the difference between a low-rider and a custom? Can any of you answer this question? Is it

A Roth fan, checking in. What a legend! RIP, Big Daddy! Those wheels on the Bubble Ray definitely are not '70s. I don't even think they had billet wheels back then. I think more people were rocking Centerlines and Vectors on blown, big-block, wide tire rides back then. And, yes, I dig custom trucks, too. I thought I'd never see trucks on Speedhunters. That yellow C-10 is the best! Love the big smoothies, so much more tasteful than giant billet hoops. As far as the Genesis goes, "It's the Great Pumpkin, Charlie Brown!"