Of all the "new" pony cars on the market today I like the look of the Mustang the best. In my books, it's the only one of the three which doesn't look over bloated and fat compared to its original version. SEMA itself was filled with modified 2010 Mustangs, most of which didn't do much for me though. I also didn't pay much attention to most of the big wheeled Pro Touring "Stangs either… But there was one Mustang that caused me to stop in my tracks: the JM Enterprises BOSS 0770-SR.

It grafts a new school Mustang front end onto a 1970 Fastback body style complete with a modern GT wide-body kit and race car underpinnings. It's an interesting link between the new school muscle cars and the original pony car movement.

It's quite the combination of elements. I'm not sure about the wing, but the overall effect is a fresh take on a high end muscle car build.

The 0770-SR can be ordered as a turn-key car, or individual parts can be purchased separately. I'm not sure how much original Mustang is present in this car though!

When was the last time you saw a high end pony car built without wheel tuck? If this were my machine I'd probably run banana spoke rims for more of a Trans-Am look, but it's still a pretty cool direction for a Mustang project.

Information about this car is hard to find, but I assume the Boss is targeted for people who want to do some hot lapping.

Here is one item that isn't working so well… the front wheel isn't lined up to the wheel well opening.

The cockpit is clean but spartan…

… And it's gutted out and ready for some track action. Mind you the "SR" in the name stands for "Street Racer" so perhaps JME have something else in mind for this car! 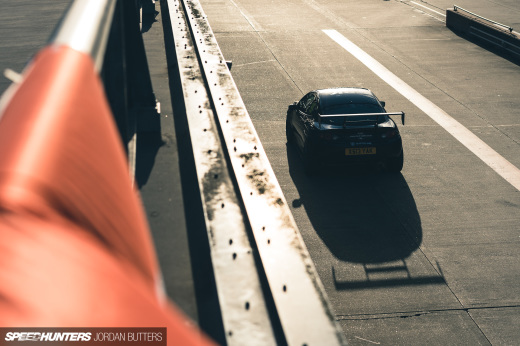 That is an abortion :/

Looks like an American-Bosozoku, but with actual potential for speed.

wow this is probably the only american muscle car i would own. i dont hate em, im jus not a muscle car fan.

Is it just me, or does it not have an engine? That might help in improving lap times.

I gotta admit that mustangs have never really floated my boat, but I definitely have to agree that the new mustang is the overall winner in the 3 revamped muscle cars. The Camaro and Challenger just seem huge compared to what they were modeled after. Though if I were to have any combination this car would be it. The attention to detail can be seen easily making this a very high quality build. The contrast between the updated headlights, the 60s-70s style rear end, and the bold widebody fenders really make a great impression. (I also like the shaved door handles). I do agree that the alignment of the front tire and wheel well is completely off, but other than that very nice. Now just throw in a 572 and hit the track.

you think thats cool !?! WTF Terrible and in the flesh, not very well detailed either

+ i think that was at SEMA last year in Yellow

Along with the rtr i think i'll add this too my wishlist.

What about the engine? Didn't u take some shots of the engine bay? The suspension setup seems interesting.

that car was orange/yellow last year with a front pushrod/cantilever coilover setup.....looks like this year the coilover has alot more caster.

As for the negetive comments...."detailed" ? hahahah would hate to see the cars you like. this chassis means business.

Chris look at the first picture and you'll see the engine bay is empty.

Whats with the coilover under the hood?

Obviously still under construction, car looks amazing tho, cant wait for the finished product! I'm sure the front suspension was just thrown underneath for the show. You cant judge yet, there is still no engine.

I think they forgot something quite essential...

THIS CAR WAS A SHOW STOPPER FOR ME. IT WAS ONE OF TE BEST LOOKING CARS ON THE FLOOR THIS YEAR. THE FACT THAT IT DID NOT HAVE AN ENGINE (YET) WAS A LITTLE DISSAPOINTING BUT AT THE SAME TIME, IT PROVIDED SOMETHING TO LOOK FORWARD TO. IN ALL OF THE ATTEMPTS AT FUSING MODERN AND RETRO... MOST BUILDERS FAILED MISERA-FUCKING-BLY. BUT THESE DUDES NAILED IT. I'M A SUCKER FOR FASTBACKS AND MACH ONES, SO I MAY BE BIASED, BUT I WAS DEFINITELY FEELING THIS CONCEPT. THIS THING SHOULDA WON THE GRAN TURISMO BEST IN SHOW.

wow! i love the new mustang fronts but the wide body looks even better. does anyone kno wat won the gran turismo award?

nice change from the current protouring trend, and I agree with rod, banana spokes for a trans-am feel would do it, oh, and a new boss 429 =)

I THINK YOU LEFT THE CAPS LOCK ON

this car looks pretty good actually, aside from the wheel not lining up and the front wheel offset seems to be way off... they got it right in the back tho. id like to see a finished version

Front wheels need wider! When people do these big flares and then put 18x9 wide wheels on, that's weaksauce! Through some 18x12's up front. Work those fenders man!!! Very cool concept though. I prefer the rear half of this "70" Mustang to the 2005-10 stand but I do like the new modern front end. Car has potential.

ditch the spoiler, give it an authentic front clip... then we'll talk

No better pictures of that inboard suspension in the front? Looks pretty interesting...

Im liking the rear(without the wing) and the rear wheels. Not to sure about the headlights, seem to light and bright and somehow to big compared to the rest? Also HATE the front wheels. They need to be 1 size bigger, have a little bit more dish and spacers/offset... The flares end randomly aswell...

I do find it interesting that this is (at least) the 3rd year this car has been at SEMA, but still no drivetrain?!

I could post pics of my long-term project, but I thought "finished" was a prerequisite.......

The front end doesn't look right at all, the rest of the car is too round.

we had three months to build this car for sema, no it is not finished and the wheel oftset will be changed. This is my own personal car and my wife said build the car of your dreams and I did it. We have a long way to go but its a start on a sick new design. Mitch

It needs a front spitter badly. Otherwise it looks quite nice.

id drop a turboed ls7 in there