After a long summer break, the NFS-EDC circus arrived at Snetterton in Norfolk of the grand finale of the 2009 season. With the title still within reach of 3 people, NFS-EDC round 5 had all the makings of event of the year.

The Coram section of Snetterton has not been used for a drift event for a good few years and I for one had forgotten just how spectacular it is. A very top end of 4th gear entry into the right hand Coram curve was followed by  95mph+ run down the hill into a temporary chicane then a huge slowdown into the tight and technical right left of Russel bends. It's a mix of 'pinch marks in the seat' speed and technical 2nd gear sections with the added bonus of limited run off … not a place for the faint of heart!

Slightly scary nature of the track aside, it didn't take the competitors long to get into the groove. Steve Will in the M3 turbo seamed to revel in the high speed Coram corner, putting in some devastating practice runs and leaving smoke trail round the entire track..

In fact the smoke screen was that thick it made it impossible to get a shot of him running down the hill.

James Russell in the DCY Skyline was looking impressive with huge angle while carrying 95+mph. I was talking to James after the event and he said it was impossible for him to enter Coram any faster, as he was on the rev limit in 4th gear!

In between drift runs, Dave Jenkins showed what was possible with 1000hp and 7 tonnes. It was massively impressive and slightly unnerving to have this spectacle pass not 20 feet from you at neigh on 100mph.

Into the competition and the first to progress to the Great 8 was Kieran Cameron, after a high speed spin from Steve Will knocked his confidence a little.

Title contender Phil Morrison was drawn against his main rival for the 2009 championship Mark Luney. After the first runs, Luney had a 6-4 advantage leaving Morrison it all to do…

..Chasing hard: Morrison looked like he had made up the disadvantage through Coram, but pushed a little too hard and ran out of stopping power for Russel and spun. Thus giving the win to Luney.

Peter Barber was next up against Kieran Cameron

..Taking the advantage in both runs, Barber progressed to the semi finals.

..Straight into a battle with Paul Conlan. Conlan took the first runs leaving Barber on the catch up..

.. a monumental effort from Barber was not enough to make up the disadvantage and Conlan got through to the finals.

…The first runs were too close to call and the battle went 'one more time'. Luney had to win the event to take the title, and he wasn't going to be easy to beat. For the second run a stunning display of driving gave him the advantage and the ticket to the finals.

..Leaving Russell to battle it out with Peter Barber for the 3rd place run off.

Another very close battle with Barber getting the overtake in the final turn, to take the win and 3rd place over all…

Friendship aside, neither driver was giving a inch matching each other blow for blow through Coram and down to Russel. Head Judge Maz scoring them equal on the first runs, so the decision was made to run the battle again to decide the not only the winner of the final round, but the winner of the championship..

Mark took the advantage the first re-run then sealed the deal with a Peter Barber style overtake in the final turn to take the round and the championship.

After 6 rounds the title was decided on the very last battle of the final event of the season, Mark Luney taking the 2009 championship with Phil Morrison in 2nd place and Peter Barber in 3rd. 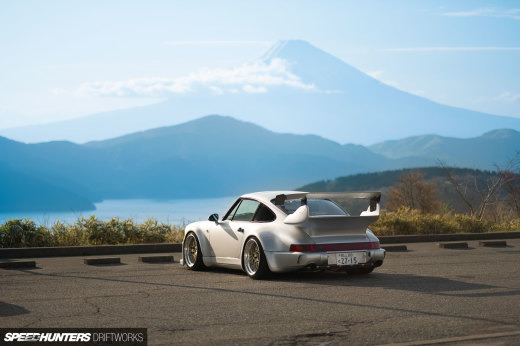 Nice camber on the truck lol.

What kind of work do Cosworth do to these cars? i noticed alot of sponsorships from Cosworth

That was sooo FUNNY! :))) HILARIOUS!! I started reading the article.... then kept on reading going like "oh..Ah.. interesting, nice car, wow the smoke! the angle!" and then came THE TRUCK! :)))) Is was like WTF!?!? Scrolling down the page and being hit in the eye by that pic seriously surprised me if not scarred me! :))) WTF!? A TRUCK!!!

How freeeeggin' awesome would it be to see it run a tandem with Phil Morrison or someone:))) Who would win? The car or the TRUCK? :))) That would best the japanese for crazy stuff:)))

man i LoVe the DriftWorks S15....it looks so good in black

the orange one is hot too

Truck drifting for everyone please.

@Harry: Cosworth, I don't think works with the drivers personally. You're talking about using an F1 contending brand that uses data from some of the most strenuous racing in the world, and pairing their parts with high-revving, high-stress nature of drifting. It's hard to imagine why other cars, and the cars in the US and Japan drifting series, haven't really started to use these parts as well.

The truck would of easily made it into thetop 16/top 8 as there was only 8 drivers there, must be only drift competition in the world that can't get 16 drivers...

Daaaaamnnnnnnnnnnn a drifting truck 7tonnes 1000hp man thats crazy man crazy as hell looks cool a wallpaper for it Ross and keep it up bro.

@ Harry Cosworth supply the winners trophy's at every round made up from bits of F1 engines, very very cool prizes.

@ Chris Davy.. Phil Morrison in a tandem run with the race truck you say.......watch this space;)

Don't tell me it already happen or that u or someone is going to make it happen!:)))

It would be SUPER AWESOME!

Especially if properly documented with some good photography and if not too much, a kick-ass video.

I think that might give birth to another epic drifting video if not another internet sensation.

Just picture it: Phil Morrison and his S15 sliding around.... yeah yeah lost of people have seen lots of S15's sliding around and lost have seen Phil in his; a few slides later comes the twist, a 7 tone, 1000hp truck shows up sliding as well and in the end it turns into a tandem battle 'till the wheels fall off! :)))))

I think that would be a epic scene!

I fly all the way from the US to see my kids, and get a rental car to visit Snetterton hoping to see an amazing end of year final.

What a *PATHETIC* final round! EDC, do you really think that is how a drift even should be run? Can't even get a top 16! WASTE OF TIME. $30 for a small ricer car show and only a few dozen drift runs? Only four or five of the drivers seemed to be able to complete the course?!? I didn't even understand who or what was going on because the commentary kept cutting out.

There was also some strange judging - I don't know how you guys in England score, but it's clearly different to us in FD because you let some huge mistakes go virtually un-penalised.

And during the twinning, no one was any closer than 10-15 meters away, so they may as well have been qualifying.

I flew over on business in the British summer and was able to catch the last day of JDM Allstars at Wembley - and there was literally 2 days of solid drifting which was absolutely epic, constant action and amazing skills. THAT is how you run a drift event.

That DW S15 was cool against the truck, but again the speed differences were so large that the S15 couldn't always maintain it's drift without going hard on the e-brake.

Great photo's though, makes the event look a lot better than it felt. You won't catch me at another EDC event if this was anything to go by. Sorry for the rant, but it was a massive let down after a 3 hour car journey.

Rejavax, completely agree with you, was a complete waste of money. Also there were capable drivers from BDC (including Martin Richards the 2009 semi-pro champ) running the drift taxis, surely they could have asked some of them to compete? it's better than nothing.

Also to make it even worse, Max Power were there with their ugly, chavved up Corsas, Saxo's and Clios, and a DJ who was white who talked like a black person to make himself look 'propa gangsta init' whilst playing his chavvy 'music' really loud. Max Power ruin the image of drifting, we need to be keeping that kind of modified car scene away from drifting, drifters in pro series drive 500 BHP supercars not Saxos with stupid huge speakers in the boots with rap music with way too much bass blasting out. Because of idiots like that drifting is viewed as a chavvy sport by people in other motorsports when that couldn't be further from the truth.

I will not be attending another EDC event ever again.

Tottaly agree guys was a complete waste of time and the drifting was dissapointing with such a little number of drivers, why can't you guys run a proper full day drift event like d1/Fd