Time to check out some more action from Round 7 of the D1-GP at Fuji Speedway, and what better way to open this post than with a nice shot of the 10 top-seeded cars, neatly lined up on the judged corner.

Here is Sakuma and Tanaka during their first Best 16 outing. Sakuma managed to beat the Team Orange driver allowing him to progress to the next stage against Tezuka.

One of the D1 image girls had to do a balancing act while being driven around in this weird "reverse trike." I wonder if it can drift?

Daigo Saito during a warm up run.

Orido up against Suenaga. This shot was taken from right next to the judge's stand so it gives a pretty good idea what they are all seeing.

Nomuken in his ER34 had no problem dealing with Matsui and his RPS13 with an S15 front end, but ultimately lost out to Kawabata who in turn progressed to the semi finals where he confronted Orido.

This was a pretty insane move from Koguchi, keeping his line very tight around the apex he was able to overtake Kuroi's S13. The crowds went wild.

Back in the paddock area I spotted some more interesting rides starting with this lowered Honda Fit riding on some big 18-inch 6-spoke wheels. Top prize goes to whoever can figure out what these wheels are.

Since the last time I saw the Auto Produce Boss Evo X it looks like it has gained some cool new products like the full carbon hood and front spoiler. The black Prodrive GC-05K work very well against the white body.

I had to go in the pits and take another look at the ST Garage IS!! Love the look of this thing!

This, like the JUN Akira Supra, is one car we will have to watch at this year's Super Lap Battle in Tsukuba.

I wonder what these Radicals could lap Tsukuba in! There is a lot of potential especially considering it managed a 6 min 48 sec lap at the Nordschleife in the hands of a pro,

More hybrids….nooooo! Black on black for this new-gen Prius.

…branded bottle caps, used in Japan to cover the Ministry of Transportation seal on the rear license plates. 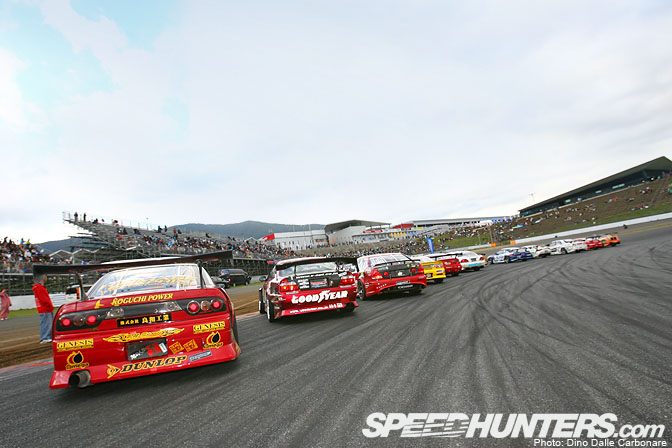 Here is a final shot of the line up top cars for 2009. The action finished early in the day in order to allow drivers to rest and teams to sort out the cars for Sunday's round, the final of the season. Stay tuned for more on that tomorrow!

The "trike" is called the Champagna T-REX in the US...

the T-Rex is awesome

saw one the other day on the highway

the wheels on the Fit are Konig Verdicts

That's a Prius, not an Insight

Also, Isn't the Honda Fit known as the Honda Jazz in Japan/Europe?

This is a new gen Prius,not insight.

Looks like Daigo Saito got a new sponsor. M7? Cool.

everything is fine, ut who is new champ??

Why the hell is everyone talking about jazzes and fittings!? >:- /

What's the deal with those bottle caps? What is it people are trying to hide with them? Is it like people taping over their plates on trackdays here so the ins.co's can't see them if they visit the tracks?

Will the T-rex drift? Yes.

http://www.youtube.com/watch?v=1QjGWi1cLyQ Oh My God wow Koguchi did that the same thing what Kawabata at Okayama, freek wow

@Lord: you found that video as well?

Well, if this was an attempt to do the same as Kawabata it didn't work out the same way for Koguchi.

dude, i don't know what you've been smoking, but they're konig verdict's.

we're all forgetting the most important detail about the Campagna T-rex! It's Canadian, eh 8)

Koguchi with another amazing overtake!!!!!

Kuroi's RB26 13 Silvia is super fast at Fuji, which makes this even more incredible...

is there any chance to see yashio factory nissan?

Wheels on that car are Konigs.

kerl, konig are just one of many companies to make copies of them.

I see the same wheel advertised as "Zeit Version SS" in an old option magazine, so that's my guess.

i didn't know that toyota their new hybrid an insight lol

yeah, the wheels on the fit are some older model from bim creative studios. they've been copied to hell and back over this side of the pacific for the past several years. only earlier this year did i learn of its origins.

picture 8 reminds me when Koguchi overtake Kumakubo at the same corner in the same circuit...

those time Kuma is fighting for his 2nd D1 championship from Kawabata...but in the end it was the day for the Toyo drifter by a small margin of points...

H E L M S T A R R : Have you not noticed this car is JZ powered, and has been for a loooong time now.

Good to see Saito still driving a real drift car, instead of that stupid Mustang, that hasn't been seen ( thank fuck).

jayzedex100...the Mustang is always on display in the paddock during D1 events. Hasn't changed one bit since TAS, so not sure what is going on with that. If he does use it I hope he drops the 2JZ from his JXZ in there!

As if the guy who wrote this doesn't know what that is.

Was kinda wondering though, whatever happened to Mad Mike? Isn't he supposed to show up at Fuji Speedway?

Fits are Fits in North America and Japan but are called Jazz's in Europe and i believe Africa, Oceania and the Middle East because I think fit is close to a swear in Swedish or something.