Around the office at EA, the Speedhunters audience is always referred to as "the hardcore"… That is, you guys are so much more than casual automotive fans; you eat, sleep and breath this stuff… But among automotive enthusiasts there are the hardcore and then there are the REAL hardcore. People whose automotive knowledge reaches encyclopedic depths in whatever area they've chosen to specialize in.

One genre of these car culture extremists are people who specialize in the cataloging and tracking of racing stats. This is a group who want to have access to all race results from all races –ever– and spend an awful amount of time finding out which chassis were used by what drivers at what events. Anyone know someone like this? They can rattle off the results from a 20 year old race like it happened yesterday, or tell you the race by race history of a particular chassis build.

These folks normally end up writing automotive books and probably have spent the past 2 years plugging in the race reports from the entire history of grand prix racing into Wikipedia. They are the custodians and catalogers of our automotive history so have an important role to play in the grand scheme of things… But don't get into a conversation with one of these stat-spotters at a party! They'll fry your brain with numbers. "The 2nd place Toyota GT-One from Le Mans 1999 spent 47 minutes and 36 seconds in the pits… whereas the winning BMW LMR spent 33 minutes and 4 seconds in the pits… now if you compare their fastest laptimes from the race…." Run!

Now if you were to look at the website www.racingsportscar.com you'd see that this site has been conceived and developed by people who have this racing staticianista mindset. You can cross reference race results, chassis codes, drivers, championships, tracks, car types… even program covers! You name it, the site's database will show you sportscar related racing stats to your heart's content.

So if we were head over to racingsportscars.com to look up the very specific sub-genre of racing history –in this case the subject of Group 5 spec BMW M1s which raced at Le Mans between 1980 and 1982– it would show us all sorts of information about these cars.

Now I assume that all of you have read the retrospective article on the history of
the BMW M1 that fellow Speedhunter, Andy Blackmore published a few
months back. We know that the M1 was
originally conceived to be a challenger to the supremacy of Porsche in
1970s international sports car racing. However delays with the manufacture and
homologation of the car, meant that it was too late on the racing
scene to make much of a mark in the history books. None-the-less a few
different parties tried their hand at their own privateer Group 5 M1
builds.

For example this is chassis number WBS59910004301028. If you check out this link on racingsportscars, you can see the entire racing history of this particular chassis. In 1979 it was run by pre-McLaren-era, Ron Dennis' Project 4 Racing team for Niki Lauda. The former world champion did very well in Procar and won Monaco, Silverstone and Hockenheim with WBS59910004301028.

The chassis probably should have been put into a museum, but instead, it was sold to the rock band, Pink Floyd's manager Steve O'Rouke for the 1981 racing season. It was at this point in time that WBS59910004301028 was rebodied with Group 5 spec spoilers and fenders. Have a look at this link here to see the car's pictoral history at racing sportscars.

However, the first Group 5 Spec BMW M1 to race at Le Mans was this purpose built silhouette machine originally constructed in 1979 by British race car constructor, March. Designed around a custom monoque chassis and a composite body, the car failed to qualify for the 1979 Le Mans 24Hs and retired from the 1980 race. If you look at the car's results listing the car hardly finished any races at all. Two different chassis saw duty on both sides of the Atlantic at various IMSA, Le Mans and WEC races but by the end of 1980 the writing was on the wall for the project.

Far more successful was this Sauber built silhouette chassis. Starting out with a full tube chassis and a carbon body, it ran a relatively standard Group 4 spec BMW M88 Straight 6 3.5L engine which was good enough for 500 bhp at 9000 rpm. Not bad for an unboosted engine.

Chassis weight came in at a relatively light(ish) 970 kg and this package was good enough for the car to win the Nürburgring 1000 Kilometres on May 24th,1981 at the hands of Hans Stuck and Nelson Piquet. 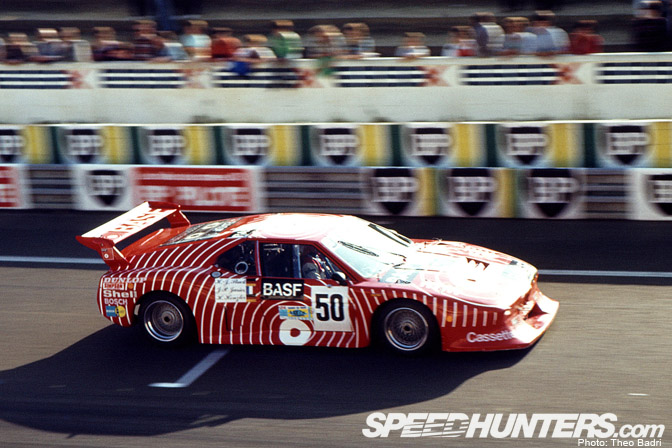 I seriously doubt the GS Sport team really thought they had any chance of winning Le Mans in 1981 though. Top speed is king at Le Mans and the power deficit to the 935s would certainly have been a big handicap.

The BASF sponsored car ended up qualifying fastest of the four Group 5 spec M1s at Le Mans that year but was some way off the pace of the fastest 935s.

The history books show the car retired on lap 57 with a broken chassis from an accident. Oh well…. To my taste this is the prettiest of all the Group 5 M1s in this story.

There were actually two of these Sauber M1s built for the 1981 season. Although the BASF GS Sport car is the more celebrated of the two, this chassis was the main Sauber run car.

The car was driven by Dieter Quester, Marc Surer, and David Deacon but retired when the engine let go. The chassis had a long race history and changed hands several times into the late 1980s.

This is chassis number WBS59910004301059 which unlike the Sauber M1s started life as a Pro Car. In 1981 it was converted to Group 5 spec by ORECA, the same concern which won Le Mans in 1991 for Mazda and later ran the factory Viper GT2 program for many years.

And when i say "converted to Group 5" it seems like this meant that the car was clothed in a smoothed off wide-body and that's about it. Perhaps the tires are a bit wider too.

Underneath it wasn't any different to a Group 4 car.

Driven by Philippe Alliot, Bernard Darniche, and Johnny Cecotto, WBS59910004301059 managed to finish 16th overall at LM 81 and was the only M1 classified in the final results.

Check out the wing angle!

Have a look at the drivers names listed on the door of the EMKA M1. We see current Speed commentator, David Hobbs, the previously mentioned, Steve O'Rourke… and what's this?… Eddie Jordan? THE Eddie Jordan?

Well it seems so! Eddie Jordan only shows up a handful of times in the Racingsportscars database, and only in the years 1981 and 1982.

There's no way of knowing if he was driving the car in this shot but Theo Badri's file name shows that this picture was taken on the second day of the Le Mans 24 hours at Arnage. Looks like the driver is having a hairy moment as he is lapped by one of the 936s.

According to the Wikipedia page about Steve O'Rourke, he famously left the circuit during the night of the race, flew to London to oversee a Pink Floyd concert and flew back the next morning only to jump straight into the car for a two hour stint!… Ahh the pre-corporate years! Something like that would never happen these days!

This is the same team that ran the Gulf McLarens in the 1990s BTW.

Unfortunately, the car failed to make the finish and was not classified.

Driving duties that year were taken up by team boss Steve O'Rourke, Richard Down, and Pink Floyd drummer Nick Mason.

The car qualified a rather humble, 44th on the grid with a rather unimpressive time of 4:00.230.

By 1982 the Group C cars were coming to the foreground. Former Porsche Group 5 builders, Joest had entered their own home brewed Group C car, the 936C.

Sauber also tried their hand at a Group C chassis that year with this pair of SHS C6s. For Le Mans they were powered by Ford Cosworth DFL engines although later in the year they switched to BMW powerplants.

The car managed to reach the end of the race… but was the last car home. Not necessarily the greatest result in the world but it did manage to get to the Le Mans finish in both '81 and '82.

What must have been very heartbreaking for the EMKA team is that the ORECA car only completed 259 laps compared to their 266… This can only mean that the EMKA M1 must have broken down very close to the end of the race.

So there you have it… the complete history of Group 5 spec BMW M1s at Le Mans. I suppose it's not really a big moment of triumph for the M1 in its overall career. Wins at the 1981 WEC 1000km race on the Nordeschliefe and the 1981 Norising DRM race with the Schnitzer Turbo M1 are probably the Group 5 M1s' 15 minutes of fame… but even so, it's sometimes fun to uncover little pieces of racing history which normally slip through the cracks.

And with the racingsportscar archive you can now look up practically all F1 (1970-82), Touring Car (ETCC) and Sports Car based races, cars, chassis, drivers, championships and track locations. Have a dig, it's fun!… Just avoid getting into conversations with regular people about this stuff, especially at parties… they'll think you're terribly boring!

good article. i must admit i am one of those people should avoid a partys.

steve o rourke has driven a varied amount of cars as you can see here: http://www.racingsportscars.com/driver/photo/Steve-O'Rourke-GB.html

everyhing from ferrari 512bb to his own emka 83c with a aston martin v8 to porsche 911 gt2 and the mclaren f1 gtr shortail and longtail. and one of the last cars he drove was a 996 gt3-r.

Now , thank you Rod , i just cancelled my psychotherapy....i understand now why i never enjoyed parties !

Despite a "globally" poor racing career , the M1 still shine today , maybe because she was really good shaped , and maybe because the music of engine could make appear tears of joy

PS : Andy's retrospective have been spammed , a bit of cleanning is needed at the end of comments.

@ Marck_c : Once you'll get used to brilliant navigator of RSC , you'll find this http://www.racingsportscars.com/suffix/photo/Mazda/RX-7/254i.html in a matter of seconds , i let you

discover by yourself the others datas and pics....

A simple trick..... : Don't hesitate to clic_clic with your mouse all over different infos when on the page i gived the link

Do you guys have any info on the BMW art cars??? Those lovely artsy M1s?

I miss the Marlboro paint schemes on almost any race car. Smoking kills, yeah yeah yeah, so does racing right so come back Marlboro!

love seeing and learning about these old racers

The M1 is one of my ALLLL time favorites!

Does anybody know if the Jim Busby March-M1 car, or part of it, still exits?

Die Casts are dangerous. Very Dangerous. Be warned. Once you start a die cast habit it's almost impossible