I was ploughing through the archive today looking for material for a couple of SpeedHunters' BMW assignments when I came across this shot, I thought why not? It was taken on the opening lap of the first ETCC race held at Spa back in July 2004. It has a strong BMW theme and I remember being pretty pleased with it at the time, double page spread in Sport Auto as I recall, making Editor Schurig happy. Of course it is pure luck to get such symmetry but as Gary Player once said " the more I practise, the luckier I get". 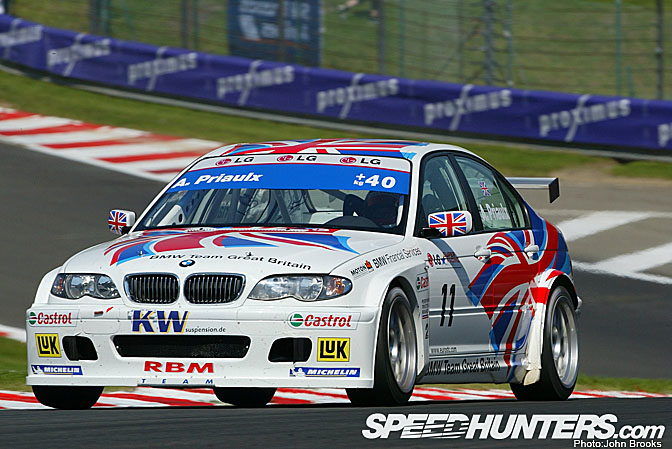 There were three really top line BMWs in contention for the ETCC title that year with the under-dog being Andy Priaulx in the Team GB car. For Andy the Spa races were solid points scores, 4th and 5th keeping the tally rolling along. The problem was the Schnitzer team and the Mullers, Dirk and Joerg.

Race one saw Dirk lead Joerg home with race two the reverse order happening, so both of Andy's main rivals gained ground on him…………………..

And speaking of rivals the season was not all about BMW. There were factory efforts from SEAT, Peugeot and Ford. But their closest opponents was the squad of Alfa Romeo 156 S2000s. At Spa the lead driver for the Italians was Augusto Farfus, who led race two till he had to serve a drive through penalty for this bit of mischief on lap two as Joerg attempted to pass………………the cars are flat in fifth climbing up the long Kemmel Straight to Les Combes, so repeatedly biffing the car next to you and putting them on the grass is regarded as a bit much………….I am pleased to report that my man Joerg did not lift…………..when I asked him after the race about the incident he looked surprised that I even considered the possibility that he would take his foot off the gas for a second………………..

Ironic that in 2009 they are team mates and Joerg is supporting the Brazilian's title chase…………………..

If there was ever a brand that needed to return to touring car racing as soon as possible, it would be Alfa Romeo. To great of a history to let it go away. Tarquini and Larini could return and Zanardi would finish the lineup.

I hope this isn't the Lancia "never to happen again" story of rallying.

Agree with the above. the days of the Alfa 155 touring were some of my favorite moments from any touring championships

The Alfa lineup today looks as great as it ever did too, I think they would make for some awesome looking touring cars.